Statistics on First Tweets to Report the #Japan Earthquake (Updated)

An 7.3 magnitude earthquake just struck 300km off the eastern coast of Japan, prompting a tsunami warning for Japan’s Miyagi Prefecture. The quake struck at 5.18pm local time (3.18am New York Time). Twitter’s team in Japan have just launched this page of recommended hashtags. There are currently over 1,200 tweets per minute being posted in Tokyo, according to this site.

Hashtags.org has the following graph on the frequency of tweets carrying the Japan #hashtag over the past 24 hours:

The first tweets to report the earthquake on twitter using the hashtag #Japan were posted at 5.19pm local time (3.19am New York). You can click on each for the original link. 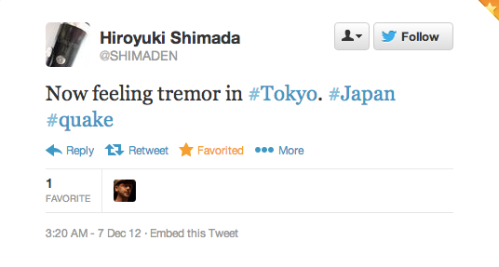 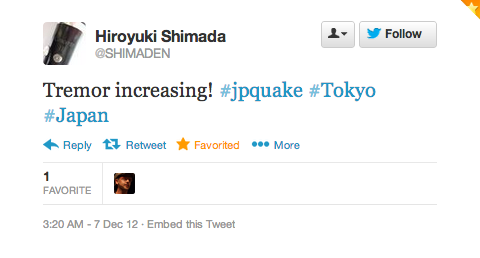 These tweets were each posted within 2 minutes of the earthquake. I will update this blog post when I get more relevant details.