PeaceTXT Kenya: Since Wars Begin in Minds of Men

Today, in Kenya, PeaceTXT is building the defenses of peace out of text messages (SMS). As The New York Times explains, PeaceTXT is developing a “text messaging service that sends out blasts of pro-peace messages to specific areas when trouble is brewing.” Launched by PopTech in partnership with the Kenyan NGO Sisi ni Amani (We are Peace), the Kenyan implementation of PeaceTXT uses mobile advertising to market peace and change men’s behaviors. 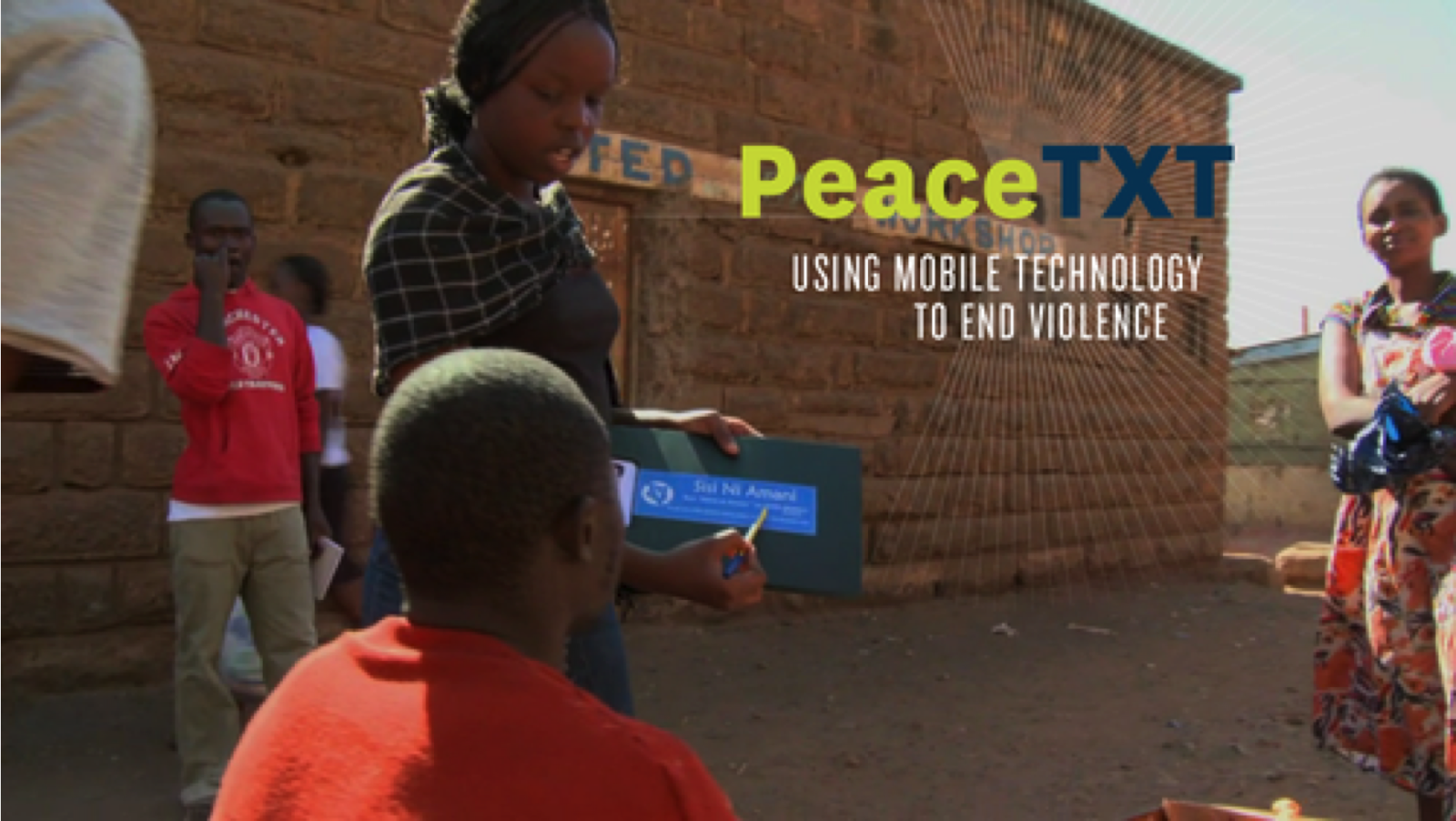 Conflicts are often grounded in the stories and narratives that people tell them-selves and in the emotions that these stories evoke. Narratives shape identity and the social construct of reality—we interpret our lives through stories. These have the power to transform or infect relationships and communities. As US-based PeaceTXT partner CureViolence (formerly CeaseFire) has clearly shown, violence propagates in much the same way as infectious diseases do. The good news is that we already know how to treat the later: by blocking transmission and treating the infected. This is precisely the approach taken by CureViolence to successfully prevent violence on the streets of Chicago, Baghdad and elsewhere.

The challenge? CureViolence cannot be everywhere at the same time. But the “Crowd” is always there and where the crowd goes, mobile phones often follow. PeaceTXT leverages this new reality by threading a social narrative of peace using mobile messages. Empirical research in public health (and mobile adver-tising) clearly demonstrates that mobile messages & reminders can change behaviors. Given that conflicts are often grounded in the narratives that people tell themselves, we believe that mobile messaging may also influence conflict behavior and possibly prevent the widespread transmission of violent mindsets.

To test this hypothesis, PopTech partnered with Sisi ni Amani in 2011 to pilot and assess the use of mobile messaging for violence interruption and prevention since SNA-K had already been using mobile messaging for almost three years to promote peace, raise awareness about civic rights and encourage recourse to legal instruments for dispute resolution. During the twelve months leading up to today’s Presidential Elections, the Kenyan NGO Sisi ni Amani (SNA-K) has worked with PopTech and PeaceTXT partners (Medic Mobile, QCRI, Ushahidi & CureViolence) to identify the causes of peace in some of the country’s most conflict-prone communities. Since wars begin in the minds of men, SNA-K has held dozens of focus groups in many local communities to better understand the kinds of messaging that might make would-be perpetrators think twice before committing violence. Focus group participants also discussed the kinds of messaging needed to counter rumors. Working with Ogilvy, a global public relations agency with expertise in social marketing, SNA-K subsequently codified the hundreds of messages developed by the local communities to produce a set of guidelines for SNA-K staff to follow. These guidelines describe what types of messages to send to whom, where and when depending on the kinds of tensions being reported.

In addition to organizing these important focus groups, SNA-K literally went door-to-door in Kenya’s most conflict-prone communities to talk with residents about PeaceTXT and invite them to subscribe to SNA-Ks free SMS service. Today, SNA-K boasts over 60,000 SMS subscribers across the country. Thanks to Safaricom, the region’s largest mobile operator, SNA-K will be able to send out 50 million text messages completely for free, which will significantly boost the NGO’s mobile reach during today’s elections. And thanks to SNA-K’s customized mobile messaging platform built by the Praekelt Foundation, the Kenyan NGO can target specific SMS’s to individual subscribers based on their location, gender and demographics. In sum, as CNN explains, “the intervention combines targeted SMS with intensive on-the-ground work by existing peace builders and community leaders to target potential flashpoints of violence.”

The partnership with Pop-Tech enabled SNA-K to scale thanks to the new funding and strategic partnerships provided by PopTech. Today, PeaceTXT and Sisi ni Amani have already had positive impact in the lead up to today’s important elections. For example, a volatile situation in Dandora recently led to the stabbing of several individuals, which could have resulted in a serious escalation of violence. So SNA-K sent the following SMS:

“Tu dumisha amani!” means “Lets keep the peace!” SNA-K’s local coordinator in Dandore spoke with a number of emotionally distraught and (initially) very angry individuals in the area who said they had been ready to mobilizing and take revenge. But, as they later explained, the SMS sent out by SNA-K made them think twice. They discussed the situation and decided that more violence wouldn’t bring their friend back and would only bring more violence. They chose to resolve the volatile situation through mediation instead.

In Sagamian, recent tensions over land issues resulted in an outbreak of violence. So SNA-K sent the following message:

Those involved in the fighting subsequently left the area, telling SNA-K that they had decided not to fight after receiving the SMS. What’s more, they even requested that additional messages to be sent. Sisi ni Amani has collected dozens of such testimonials, which suggest that PeaceTXT is indeed having an impact. Historian Geoffrey Blainey once wrote that “for every thousand pages on the causes of war, there is less than one page directly on the causes of peace.” Today, the PeaceTXT Kenya & SNAK partnership is making sure that for every one SMS that may incite violence, a thousand messages of peace, calm and solidarity will follow to change the minds of men. Tudumishe amani!

2 responses to “PeaceTXT Kenya: Since Wars Begin in Minds of Men”