In June 2014, a joint USAID and USGS team used a small UAV to map artisanal diamond mining sites in Western Guinea. The purpose of this UAV mission was to support the “Kimberley Process (KP), an international initiative aimed at preventing the flow of conflict diamonds.” Adhering to the Process’s regulations is proving challenging for “countries whose diamonds are produced through artisanal and small-scale mining (ASM).” These mines are “often remote and spread over vast territories, and the diamonds found are frequently sold into informal networks,” which makes it “very difficult to track production—a key requirement of the KP.” National governments have recently taken important steps to formalize ASM by “registering miners, delineating mining zones, and establishing a legal flow chain through which production is intended to move. The ability to map and monitor artisanal diamond mining sites is a necessary step towards achieving formalization. Doing so helps to identify where mining is taking place, the extent of activities, the amount of production, and how the activity and production change over time.”

While the US Geological Survey (USGS) has been using satellite imagery to “identify ASM activities and estimate the production in diamond mining zones through-out the region,” satellite imagery presents a number of limitations. These include “atmospheric constraints (cloud cover, haze, smoke, etc.)” as well as “temporal resolutions that fail to capture the dynamic nature of ASM sites and spatial resolutions that can be inadequate for identifying fine-scale features.” Hence the use of UAVs to “support USAID’s Property Rights and Artisanal Diamond Development (PRADD) project’s efforts to formalize ASM in Guinea.” USAID and USGS deployed a joint team in June 2014 to “create detailed site maps and generate very-high resolution digital elevation models (DEMs) of the region to better inform diamond production evaluations.” The team flew a DJI Phantom 1, a multi-rotor UAV (pictured below) to “collect data at seven artisanal diamond mining sites in the Forecariah Prefecture of western Guinea.”  The DJI UAV was flown by Visual Line of Site (VLOS).

The resulting aerial imagery allowed the team to “clearly distinguish active pits from inactive pits, locate and measure piles of extracted gravel and sedimentary layers, and detect changes in water color and sediment properties. The ability to map an entire site from one or two field locations is particularly beneficial for ASM research, as mine sites are often located in remote areas, can be several square kilometers in size, and sections of sites may be inaccessible or even dangerous for researchers to traverse due to a lack of roads, surficial disturbance due to mining, or other challenging terrain.” The team’s use of the multi-rotor UAV enabled them to “acquire complete aerial coverage of a site in under an hour.” A small fixed-wing UAV like an eBee would likely take under 15 minutes; but fixed-wings can be more challenging to operate (they do not take off and land vertically like the multi-rotors, for example) and can also cost a lot more.

The team is using the nadir imagery collected from the UAVs to develop 10cm resolution Digital Elevation Models (DEM) of each mine site. In addition, USAID is using the “aerial videos and oblique still imagery captured using Camera 1 (wide angle lens) to conduct participatory mapping with local communities in Forecariah Prefecture to delineate mining and agricultural zones. This will assist with the formalization of property rights, thus reducing local-scale conflicts over land use.” Note that UAV regulations do not exist in Guinea, which is why it was “the team’s responsibility to identify a process for contacting the appropriate authorities in Guinea to acquire permission to fly the UAS. This involved receiving signed letters from the Minister of Mines and Geology, the Minister of Transportation, and consent from the ministers of Defense and the Interior.” 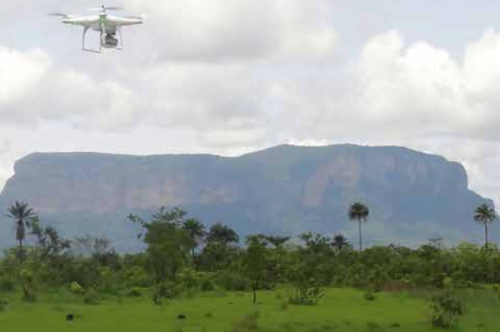 And this is especially refreshing (not least because of the Ebola outbreak at the time): “Equally as important as acquiring permission at the national government level was informing local communities near the field sites about the planned [UAV] mission.” To accomplish this, the team “traveled to villages and mining sites to conduct a public relations campaign to notify local populations that the [UAV] would be flown in the area and to explain why it was being flown and what to expect. During the flight missions the team immediately downloaded and played video collected by the [UAV] for miners & villagers as a follow-up to the information campaign and to let them see their local landscapes from a birds-eye perspective. These steps added significant time to the field mission, but were essential to gaining the trust of local populations.” These steps are also in line with the Code of Conduct produced by the Humanitarian UAV Network (UAViators) in early 2014. This Code of Conduct has since been revised by several dozen humanitarian organizations who have also drafted guidelines on community engagement and data ethics for UAV projects (more on this here).

In conclusion, “an abundance of information is being gathered from these [images], ranging from the scope of mining activities, the location of mining within the landscape, the amount of activity at each site, the impact of mining on the surrounding environment, and the type of mining activities being conducted at the time of image collection.” The results will enable the “Guinean government to select appropriate zones to parcel for artisanal mining based on diamond potential, an important step towards formalization and resource governance. Interpretation of the data will also assist with the identification of abandoned mine sites that can be remediated into other income-generating activities, such as fish farming and vegetable gardens, thus helping to reduce the long-term environmental degradation caused by ASM.”

I was recently introduced to Pete Chirico, one of the team members from USGS who deployed to Guinea. You can read more about his write-up of the Guinea mission here (PDF). Pete will soon be headed back to Africa to carry out a similar mission. I look forward to meeting up with him soon to learn more about his good work. The Guinea project represents the very first time that USAID made use of a UAV in one of its projects. Alas, many at USAID are not aware of this. I know this because I was recently invited by USAID to give a talk on UAV applications and this important precedent was not brought up. In any event, USAID’s former Administrator Rajiv Shah—pictured above with colleague Frank Pichel—was briefed on the initiative last year.

This entry was posted in Drones/UAVs, Humanitarian Technologies and tagged diamonds, Guinea, mines. Bookmark the permalink.