My Thoughts on Gladwell’s Article in The New Yorker, Part 2

The first part of my response to Gladwell’s article in The New Yorker explained why principles, strategies and tactics of civil resistance are important for the future of digital activism. In this second part, I address Gladwell’s arguments on high vs. low risk activism, weak vs. strong ties and hierarchies vs networks.

According to Stanford sociologist Doug McAdam, the civil rights movement represented “high-risk activism” which requires “strong-ties”. By strong-ties, McAdam refers to the bonds of friendship, family, relationships, etc. These social ties appear to be a necessary condition for recruiting and catalyzing a movement engaged in high-risk activism. “What mattered more was an applicant’s degree of personal connection to the civil-rights movement.” Indeed, you’re more likely to join a rally if your close friends are going. “One study of the Red Brigades, the Italian terrorist group of the nineteen-seventies, found that seventy per cent of recruits had at least one good friend already in the organization.”

In contrast, Gladwell argues that “the platforms of social media are built around weak ties.” The problem with evangelists of social media, according to him, is that they “believe a Facebook friend is the same as a real friend.” In addition, while “social networks are effective at increasing participation,” they only do so by “lessening the level of motivation that participation requires.”

Gladwell then adds the “networks versus hierarchies argument” to further his point. Strategic nonviolent action requires organization, planning and authority structures. Social media, on the other hand, “are not about this kind of hierarchical organization.” This is a “crucial distinction between traditional activism and its online variant,” says Gladwell.

Facebook and the like are tools for building networks, which are the opposite, in structure and character, of hierarchies. Unlike hierarchies, with their rules and procedures, networks aren’t controlled by a single central authority. Decisions are made through consensus, and the ties that bind people to the group are loose. This structure makes networks enormously resilient and adaptable in low-risk situations.

But it is simply a form of organizing which favors the weak-tie connections that give us access to information over the strong-tie connections that help us persevere in the face of danger. It shifts our energies from organizations that promote strategic and disciplined activity and toward those which promote resilience and adaptability. It makes it easier for activists to express themselves, and harder for that expression to have any impact.

I tried to summarize Gladwell’s arguments in the diagram below and would be interested in feedback. The red arrow represents high-risk activism and the green low-risk. As per his argument, high-risk activism requires both strong ties and high levels of organization. 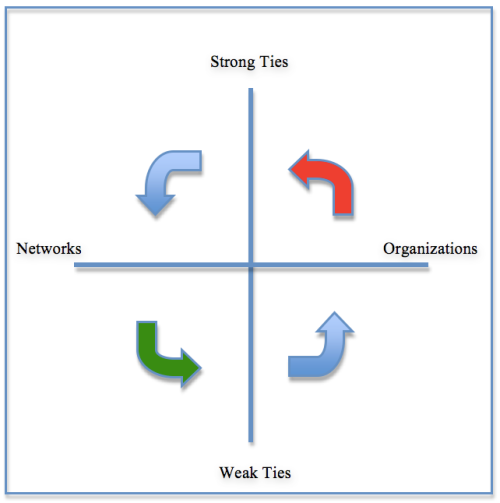 Gladwell makes a compelling case and one that I largely agree with, but not completely. Would the four colleague students who instigated the first wave of protests in North Carolina during the Winter of 1960 have turned down the opportunity to use email, SMS, Facebook or Twitter? Would their use of social media tools have caused their movement to fail? Would the strong-ties these students shared be diluted as a result of also being friends on Facebook? I personally doubt it, they would still have shown up at Woolworth.

Gladwell is right to distinguish between high-risk and low-risk activism but this is a false dichotomy. Not everyone in society faces the same kinds of risks, nor do they face the same levels of risk all the time. Total war in the Clausewitzian sense only holds true for thought-experiments. Indeed, a recent study study found that, “The average percentage of area covered by civil war […] is approximately 48%, but the average amount of territory with repeated fighting is considerably smaller at 15%.”

So if communities face a range of risks that span from low to high, then one would want to leverage both strong-ties and weak-ties along with appropriate organizational forms, offline tactics and social media tools. This means that both networks and hierarchies are needed; and that neither organizational form need remain static over time since risks are not static. Indeed, an effective social movement needs organizations that promote strategic and disciplined activity and networks that promote resilience and adaptability. Both are absolutely key to the practice of strategic nonviolent action.

There’s no doubt that the civil rights movement represented high-risk activism. Does this mean that the same methods used in the 1960s would work for high-risk activism in a country like Egypt, North Korea or even in Cambodia during the genocide that killed an estimated 1.2 to 1.7 million people?  Can the US media of the 1960s really be compared to North Korean media? As my colleague David Faris noted in a recent email exchange on Gladwell’s article,

The initial sit-ins may have been launched by a small group of people impervious to the danger, but they grew to 70,000 not only because close friends were doing it, but also because people saw acquaintances protesting, and decided that the level of risk required to participate had fallen. This is important because in the U.S. in 1960 the media were willing to report on these events. This is not the case across the authoritarian world, where news relayed by text and Twitter may be the only reliable source of information apart from your immediate circle of friends. By relaying information about the preferences of your weak ties, social media provide individuals with more accurate pictures of the preference-sets of other members of their community.

New social media tools don’t dictate the organizational form of the movement, they simply create more options. So a hierarchical organization can very well use new media platforms to conduct their own highly centralized movement. It’s just like the Ushahidi platform, it is a tool, not a methodology. If a group of protesters don’t put any serious time into planning their campaigns, identifying key strategies and tactics, training, drafting contingency measures, fund raising, etc., then the presence of social media tools will not explain why their protests are ineffective. It would be too easy of an excuse. 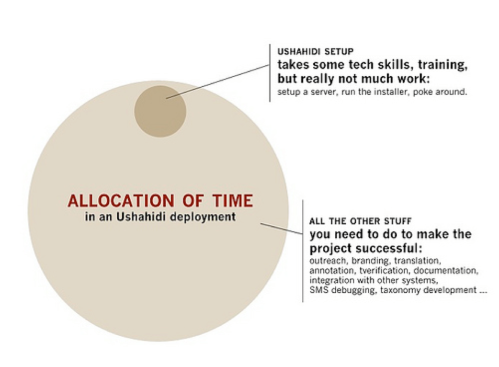 Ushahidi is only 10% of the solution

Here’s a graphic designed by my colleague Chris Blow that shows why technology is at most 10% of the solution (the context is Ushahidi but the principle applies more broadly). If a movement doesn’t take on “all the other stuff”, then it doesn’t matter whether members are part of a network, a centralized organization, have weak-ties or strong-ties, or whether they are in a high-risk or low-risk environment. They are unlikely to succeed.

This entry was posted in Digital Activism, Social Media and tagged Gladwell, Nonviolence. Bookmark the permalink.

8 responses to “My Thoughts on Gladwell’s Article in The New Yorker, Part 2”