From Aerial to Maritime Robotics for Payload Delivery?

WeRobotics is co-creating a global network of social innovation labs to accelerate the transfer of appropriate robotics solutions to local partners who need them the most. Launched last week at the prestigious 2016 International Drones & Robotics for Good Awards in Dubai, WeRobotics seeks to democratize the Fourth Industrial Revolution. One of several new labs under consideration is Cuyo Flying Labs in the Cuyo Archipelago of the Philippines.

Our local partners in this district are outstanding public health professionals who have made a clear and data-driven case for exploring robotics solutions to improve the delivery of essential medicines across the islands of the Archipelago. WeRobotics has reached out to it’s network of Technology Partners to identify a cross-section of aerial robotics solutions. We plan to pilot and evaluate these solutions together with our local partners this year; just waiting to hear back on a number of grant proposals.

Aerial robots are not the only robotics solutions out there, however. Indeed, a number of contestants at the International Drones & Robotics Awards presented maritime robotics platforms. One team from NYU Abu Dhabi presented their Reef Rover solution, which I gave high marks to (I served on the panel of judges for the finals of the championship and also had the honor of giving the opening Keynote). Fellow keynote speaker David Lang from OpenROV also presented his group’s maritime robotics solution.

So I caught up with David and told him about the possible Cuyo project. I asked him about possible autonomous maritime robotics solutions that could carry a 1- 2kg payload across a 20-mile stretch. Given that GPS signals and radio waves do not travel well underwater, the solution would need to be a surface-water robot. That said, Team NYU did come up with a neat solution to this issue as shown in the above video. But said solution may be problematic for long distances. In any event, I was surprised to learn from David that existing surface-water robotics solutions would likely range in the hundreds of thousands of dollars. So I asked David about possibility hacking a remote control boat since these toys cost a couple hundred dollars at most. 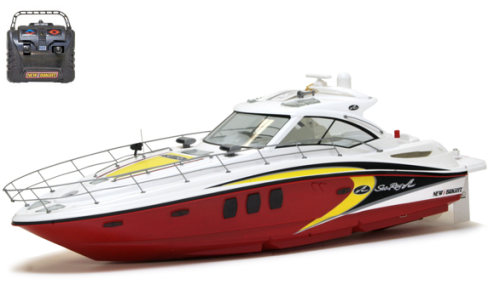 This could totally be done, according to David. He encouraged me to blog about the humanitarian applications of small autonomous boats and to share my post with the DIY community for feedback. So here we are. I also did some research on autonomous boats and came across this high school project—aptly titled DIY boat—along with the short video below. These kinds of boats can travel between 10-25 miles per hour. Battery power won’t be an issue but salt water and robotics are not the best of friends. So developing a persistent & robust solution with sense and avoid technology will need more thought.

I also found this more recent article (February 2, 2016) on swarming robot boats that apparently demonstrate learning. More on this applied research project in the video below.

As for operating this in Cuyo, we could test out the autonomous boat late at night when no commercial boats or fishermen are likely to be out and about. The water routes would be automatically programmed so the maritime robot would simply do several runs back and forth. In other words, even if the boat can “only” carry 1kg-2kg at a time, the frequency of the trips could make up for the low payload weight—just like aerial robotics. Of course, we’d have to look up the Philippine’s maritime regulations to figure out what kinda of permits might be necessary, but I assume these regulations may not be as demanding as aviation regulations.

In any event, WeRobotics seeks to work across multiple robotics platforms, from aerial robotics to terrestrial robotics to maritime robotics. For now, though, most of the world’s attention is focused on the hype surrounding small autonomous aerial robots. But aerial robotics won’t be the one and only wave of robotics to impact the social good space. So f you know of existing maritime solutions that we could pilot this year as part of Cuyo Flying Labs, then I’d be most grateful if you could either get in touch or leave a comment below. Many thanks!

3 responses to “From Aerial to Maritime Robotics for Payload Delivery?”