Back to the Future: Drones in Humanitarian Action

A devastating earthquake struck Nepal on April 25th, 2015. The humanitarian drone response to the earthquake was almost entirely foreign-led, top-down and techno-centric. International drone teams self-deployed and largely ignored the humanitarian drone code of conduct. Many had never heard of humanitarian principles and most had no prior experience in disaster response. Some were arrested by local authorities. At best, these foreign drone teams had little to no impact. At worse, they violated the principle of Do No Harm. Nepal Flying Labs was co-created five months after the earthquake, on September 25th, 2015, to localize the responsible and effective use of drones for positive social impact. Today, Flying Labs are operational in 25 countries across Asia, Africa and Latin America.

This month, on behalf of the World Food Program (WFP), WeRobotics teamed up with Nepal Flying Labs and WFP Nepal to run a 5-day hands-on training and disaster simulation to improve the rapid deployment and coordination of drones in humanitarian action. WeRobotics previously designed and ran similar humanitarian drone trainings and simulations on behalf of WFP (and others) in the Dominican Republic, Peru, Myanmar, Malawi and Mozambique, for example. In fact, WeRobotics has been running humanitarian drone trainings since 2015 both in-person and online.

All 25 Flying Labs typically run their trainings in local languages. As such, the 5-day training in Nepal was largely led by Nepal Flying Labs and run in Nepali. Over 40 participants from 16 Nepali organizations took the training, which included an introduction to drone technologies,  drone photogrammetry, imagery processing, lessons learned and best practices from past humanitarian drone missions, and overviews of codes of conduct, data protection protocols and coordination mechanisms, all drawn from direct operational experience. The training also comprised a series of excellent talks given by Nepali experts who are already engaged in the use of drones in disaster management and other sectors in Nepal. This featured important talks by several officials from the Civil Aviation Authority of Nepal (CAAN). In addition, the training included a co-creation session using design thinking methods during which local experts identified the most promising humanitarian applications of drone technology in Nepal.

Nepal Flying Labs also trained participants on how to fly drones and program drone flights. The drones were rented locally from the Flying Labs and their partners. This hands-on session, kindly hosted by Kathmandu University, was followed by another hands-on session on how to process and analyze aerial imagery. In this session, Nepal Flying Labs introduced participants to Pix4Dreact and Picterra. Pix4Dreact provides an ultra-rapid solution to data processing, allowing humanitarian drone teams to process 1,000 high-resolution aerial images in literally minutes, which is invaluable as this used to take hours. Picterra enables drone teams to quickly analyze aerial imagery by automatically identifying features of interest to disaster responders such as damaged buildings, for example. While Picterra uses deep learning and transfer learning to automate feature detection, users don’t need any background or prior experience in artificial intelligence to make full use of the platform. During the hands on-session, trainers used Picterra to automatically detect buildings in aerial (orthophoto) map of an earthquake-affected area. 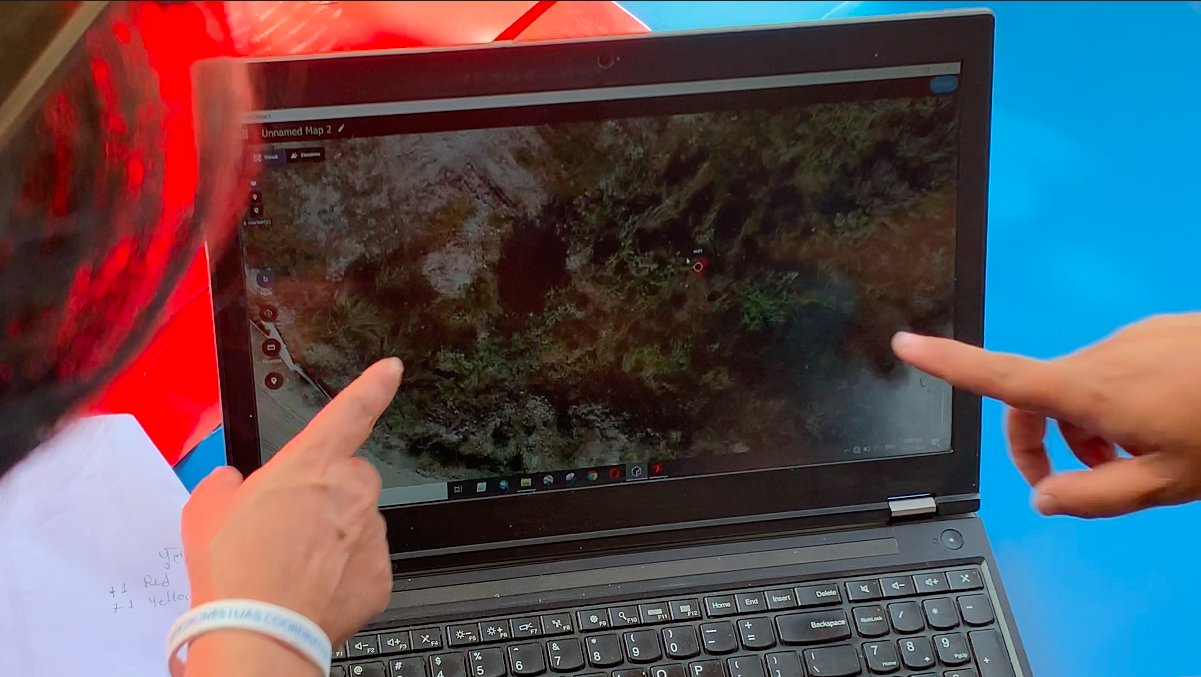 After completing a full day of hands-on training, Nepal Flying Labs gave a briefing on the disaster simulation scheduled for the following day. The simulation is the centerpiece of the humanitarian drone trainings run by WeRobotics and Flying Labs. It requires participants to put into practice everything they’ve learned in the training. The simulation consolidates their learning and provides them with important insights on how to streamline their coordination efforts. It is often said that disaster responders train the way they respond and respond they way they train. This is why simulations are absolutely essential. 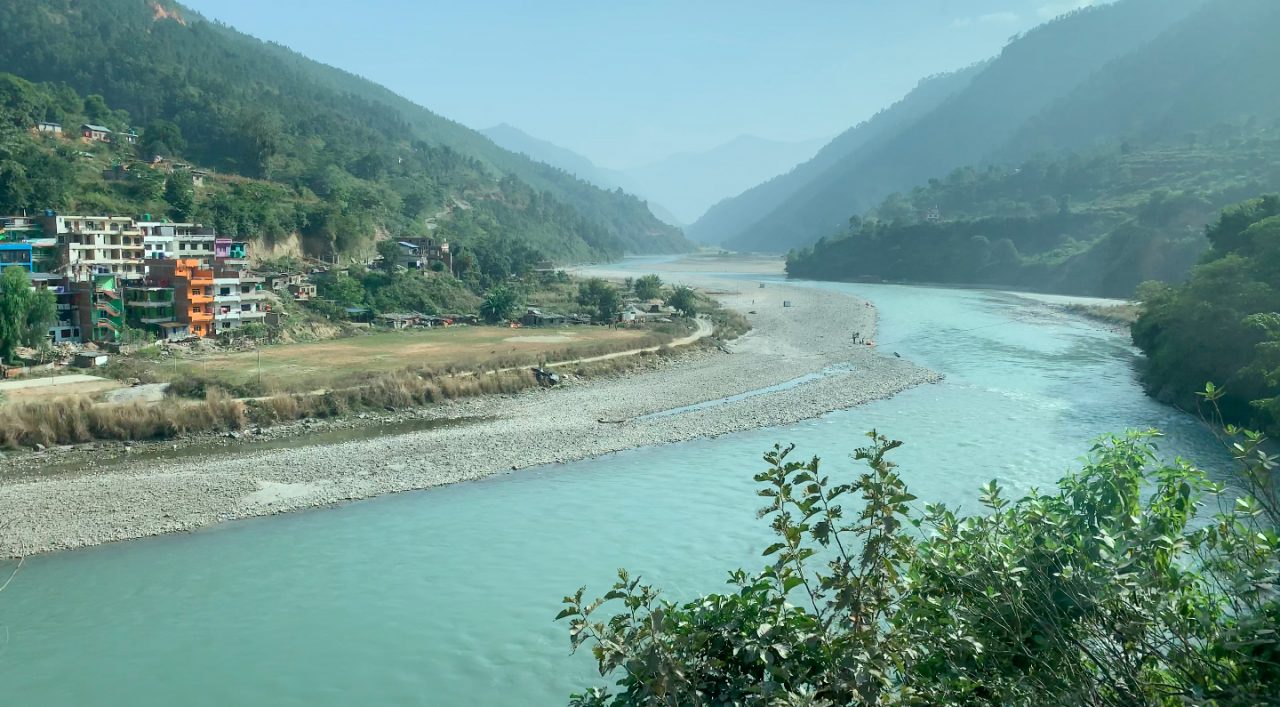 The simulation was held at Bhumlu Rural Municipality, a 3+ hour drive from Kathmandu. Bhumlu is highly prone to flooding and landslides, which is why it was selected for the simulation and why the Government of Nepal was particularly keen to get high-resolution maps of the area. The disaster simulation was run by Nepal Flying Labs in Nepali. The simulation, first designed by WeRobotics in 2015, consists of three teams (Authorities, Pilots and Analysts) who must work together to identify and physically retrieve colored markers as quickly and safely as possible. The markers, which were placed across Bhumlu prior to participants’ arrival, are typically 1 meter by 1 meter in size, and each color represents an indicator of interest to humanitarians, e.g., Yellow = survivor; Blue = landslide; and Red = disaster damage. Both the colors and the number of different markers are customized based on the local priorities. Below, Nepal Flying Labs Coordinator Uttam Pudasaini hides a yellow marker under a tree prior to the arrival of participants. 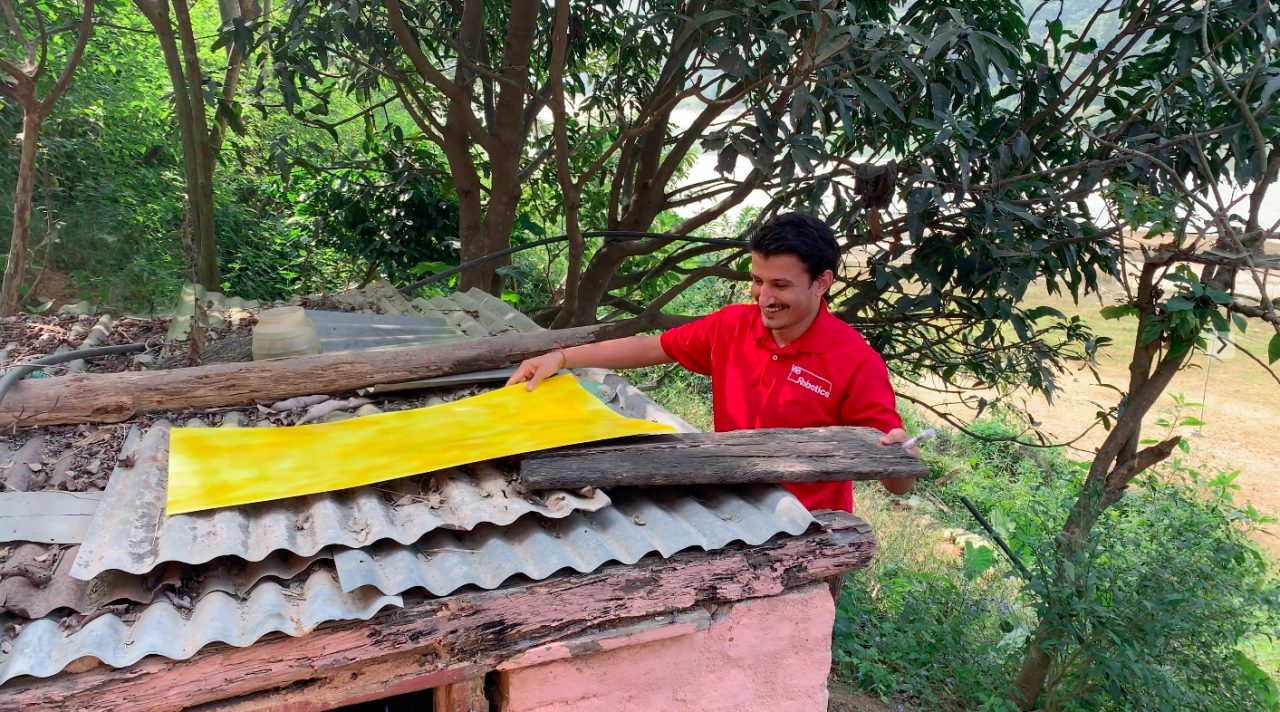 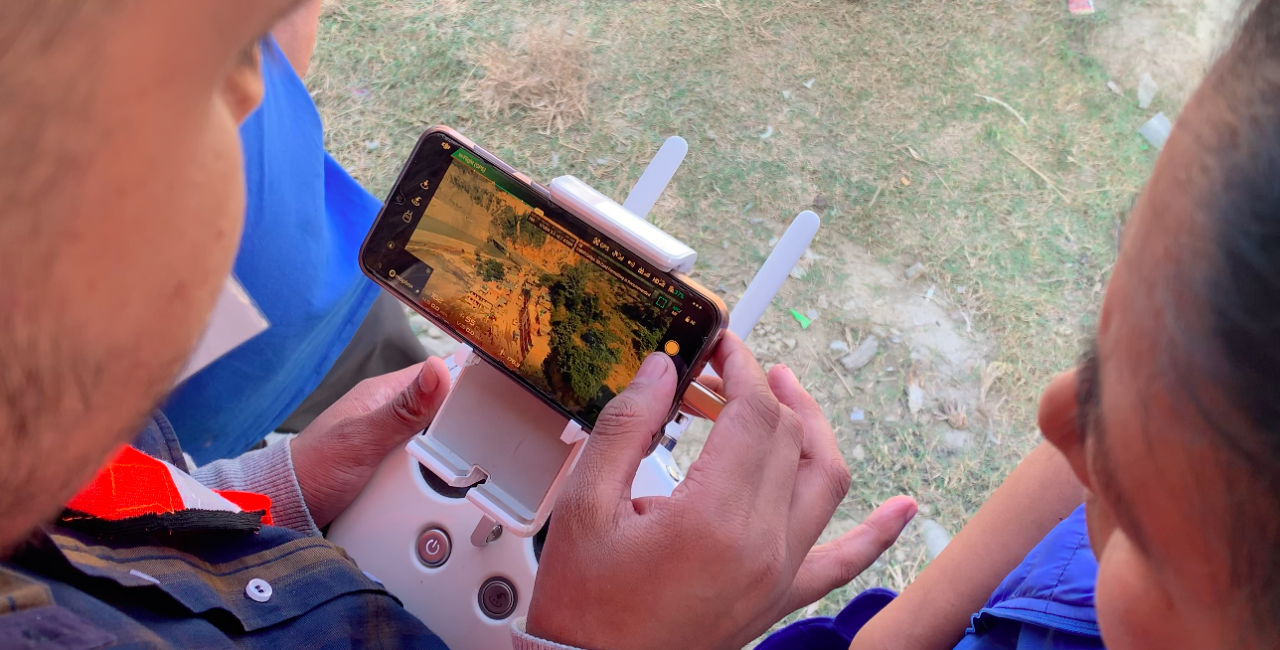 On the following and final day of the workshop, Nepal Flying Labs and WeRobotics facilitated an all-hands session to debrief on the simulation, inviting each team and trainee to reflect on lessons learned and share their insights. For example, a feedback loop between the Pilots and Analysis Teams is important so pilots can plan further flights based on the maps produced by the analysts. Like a number of previous simulations run by WeRobotics, the Analysis Team noted that having a portal printer on hand would be ideal. The Pilots Team also suggested that having different colored visibility vests would’ve enabled more rapid field coordination between and within teams by enabling individuals to more quickly identify who is who.

When asked which individuals or group had the most challenging job in the simulation, the consensus was the retrieval group who are part of the Authorities Team and responsible for retrieving the markers after they’ve been geo-located by the Analysis Team. This was particularly interesting given that in all previous simulations run by WeRobotics, the consensus had always been that the Analysis Team had the hardest task. In coming weeks, these insights together with the many others gained from the simulation in Nepal will be added to this document on best practices in humanitarian drone missions. 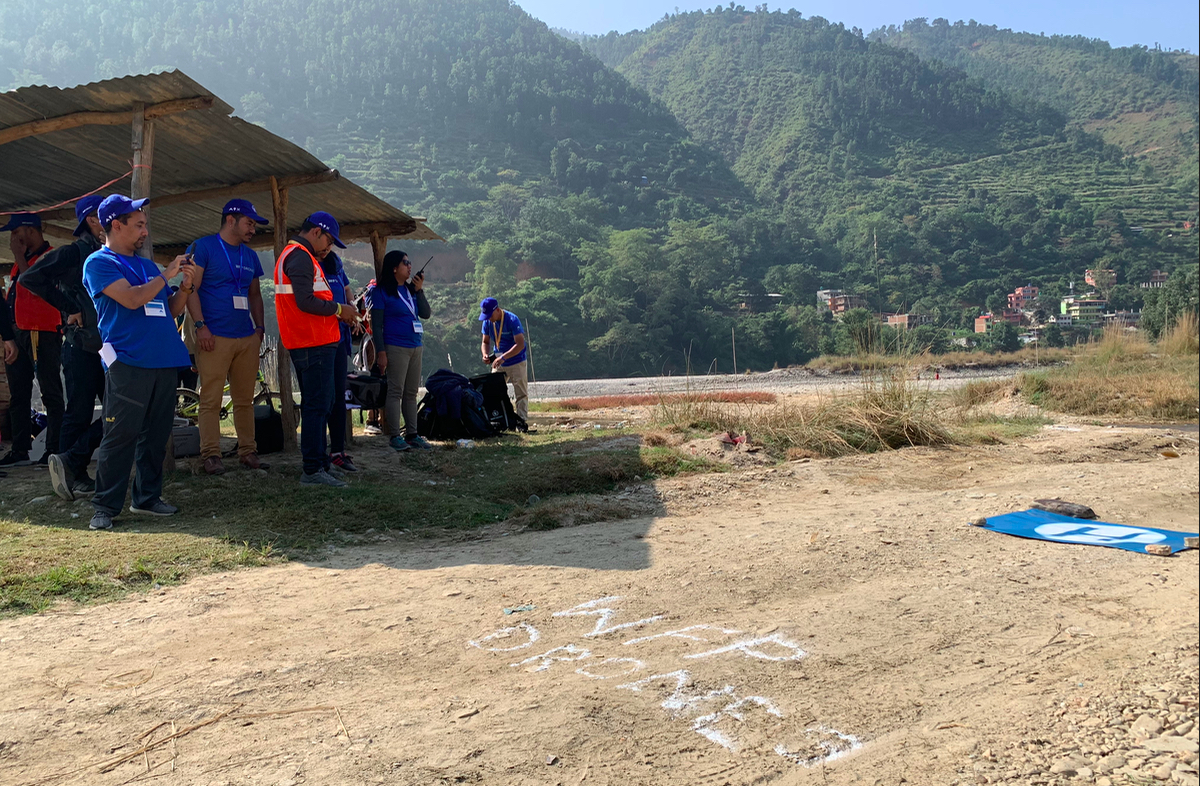 After the full simulation debrief, Nepal Flying Labs facilitated the final session of the training: a panel discussion on the development of drone regulations to save lives and reduce suffering in Nepal. The panelists included senior officials from Civil Aviation, Home Ministry and Nepal Police. The session was run in Nepali and presented participants with an excellent opportunity to engage with and inform key policymakers. In preparation for this session, Nepal Flying Labs and partners prepared this 3-page policy document (PDF) with priority questions and recommendations, which served as the basis for the Q&A with the panel. This discussion and policy document created a roadmap for next steps which Nepal Flying Labs and partners have pledged to take forward with all stakeholders. 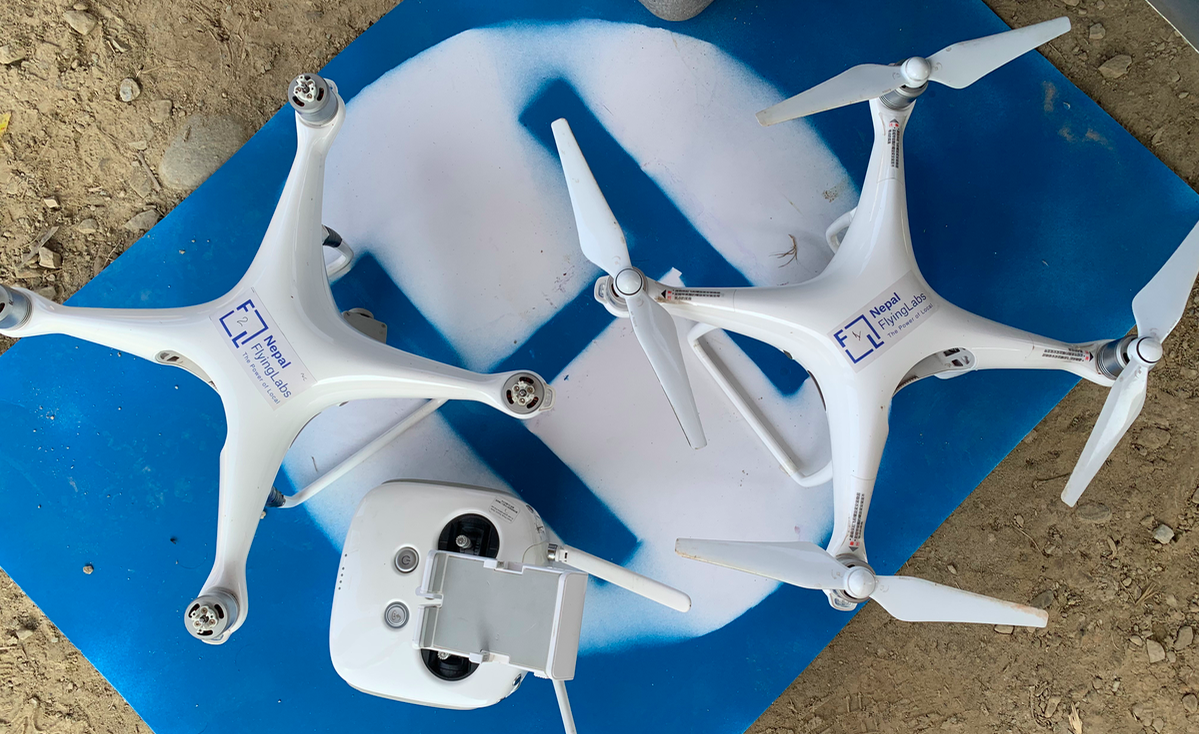 Acknowledgements: WeRobotics and Nepal Flying Labs would like to sincerely thank WFP HQ and WPF Nepal for the kind invitation to run this training and for providing the superb coordination and logistics that made this training so fruitful. WeRobotics and Nepal Flying Labs would also like to express sincere thanks to DroNepal for co-leading the training with Nepal Flying Labs. Sincere thanks to the local communities we worked with during the simulation and to the CAA and local police for granting flight permissions. To all 40+ participants, sincerest thanks for all the energy you brought to the training and for your high levels of engagement throughout each of the 5 days, which significantly enriched the training. Last but certainly not least, sincere thanks to the Belgium Government for funding this training. 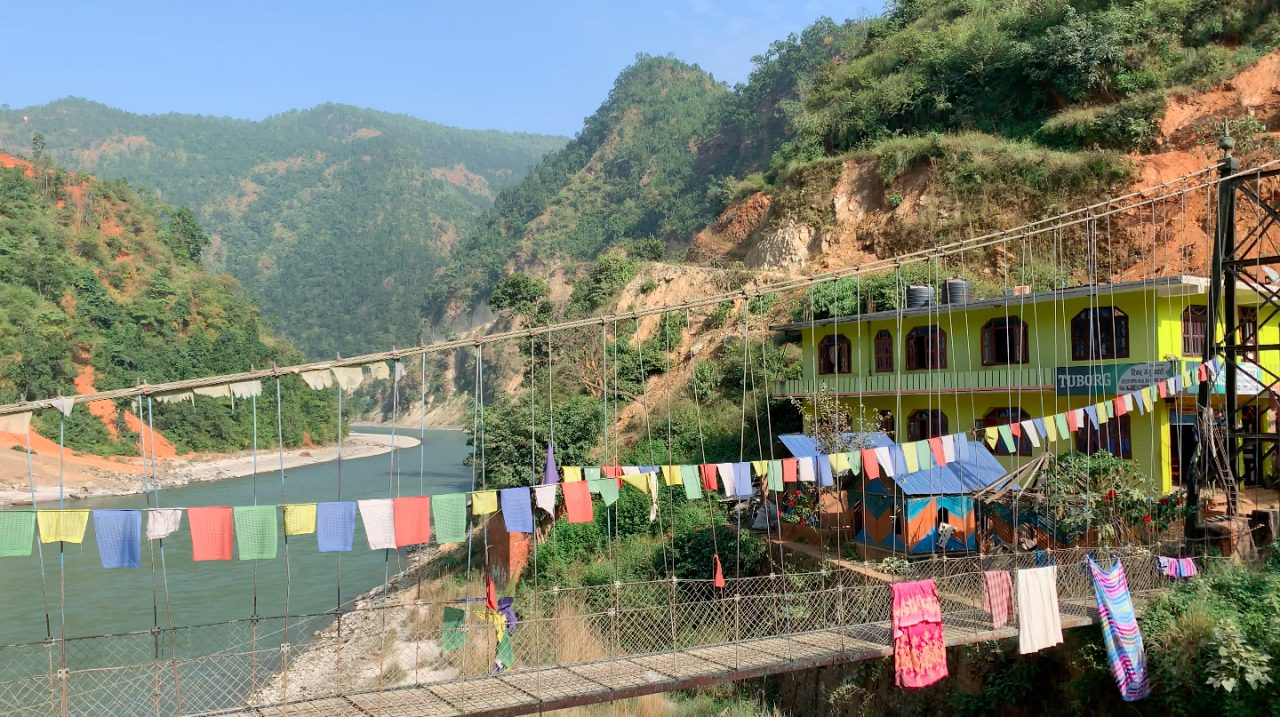