This panel included activists from Kenya, Armenia, Iran and Venezuela to discuss the following question: is citizen media having an actual impact on democracies in transitions? 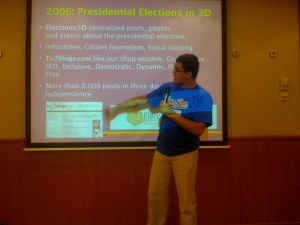 “But then things changed and the situation turned. We could tell immediately that something was not right. Bloggers started reporting strange things going on. When the violence started and spread, people started to use different tools to keep up with the fast changing situation. Twitter started being used. We thought some of these tools were just for teenagers but we quickly came to appreciate their importance.”

“Some lessons learned: The importance of having a global network is imperative; gives you support, lets you know you are not alone, and helps you keep a perspective on the local events. Citizen media was able to operate in almost real time. As bloggers, we need to protect our reputation, it’s all we have and we must do everything to keep our integrity. We need to admit our mistakes when we are wrong and stay away from non-constructive arguments. You do not have to be ‘on the inside’ to be significant. Finally, bloggers are not aliens. If society is divided, bloggers will be divided. We are part of society.”

This entry was posted in Digital Activism, Social Media. Bookmark the permalink.