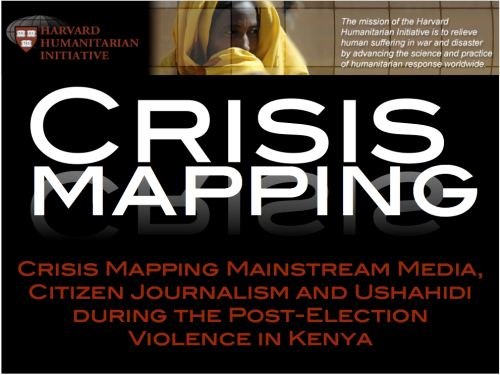 Are citizen journalists playing an increasingly important role in documenting violent conflict and human rights violations? I posed this question during the 2008 Global Voices Summit and answered affirmatively—but without more than a hunch and rather limited anecdotal evidence. Paul Curion took issue and David Sasaki recommended that someone carry out an empirical study.

I appreciated David’s practical recommendation and decided to pursue the project since the topic overlaps with the Conflict Early Warning and Crisis Mapping project I’ve been working on at the Harvard Humanitarian Initiative (HHI). Supported by Humanity United, the project seeks to explore the changing role and impact of information communication technology in crisis early warning and humanitarian response.

Seeing that I was in Nairobi visiting my parents during the election violence, I chose Kenya as a case study to assess the role of citizen journalists in crisis environments as compared to the mainstream media. My colleagues Kate Brodock, Briana Kramer and I used event-data analysis to code reports of violent and peaceful events as documented by about a dozen citizen journalist bloggers between December 27, 2007 and January 27, 2008. 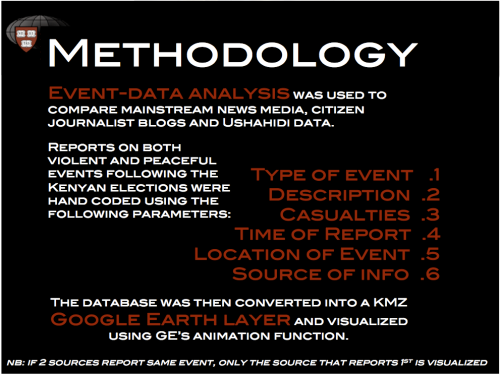 We did the same for mainstream media, ranging from print media (national newspapers) to radio and television programs. I also included the Ushahidi data because I wanted to carry out a three way comparison between mainstream news media, citizen journalism and a dedicated crowdsourcing platform.

We then created a Google Earth layer to visualize the data over time and space. Below is a YouTube video I created of the animation (for slower Internet connections). Here is the Google Earth layer (KMZ). The data can also be visualized on Google Maps here.

A dynamic time line is also available below. The interactive time line depicts the number of daily reports produced by mainstream news, citizen journalists and Ushahidi over the 30-day period of study.

For further information on our project’s methodology and sources, please see this short powerpoint presentation (PDF) which we have also uploaded on Slideshare. For more on crisis mapping, please see this page. For additional information on the role of digital technology during Kenya’s post election violence, see this narrative-based analysis (PDF) by my two colleagues Josh Goldstein and Juliana Rotich.

We look forward to receiving as much feedback as possible so we can improve our methodology and analysis in future case studies. We’re especially keen to have others interpret the dynamics displayed in the animation above. In the meantime, please contact me if you’d like to join the team and contribute to our next case study, which will be of Georgia. 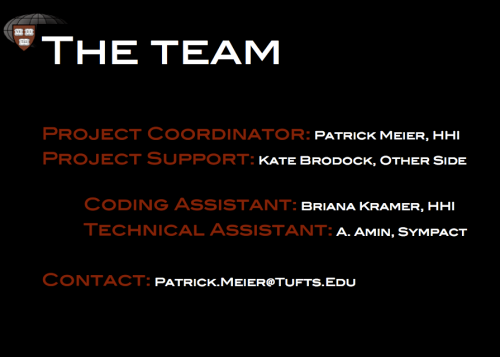