The BBC World Service Trust just released an excellent Policy Brief (PDF) on “The Unmet Need for Information in Humanitarian Responses.” The majority of the report’s observations and conclusions are in line with the findings identified during Harvard Humanitarian Initiative’s (HHI) 18-month applied research project on Conflict Early Warning and Crisis Mapping.

I include below excerpts that resonated particularly strongly.

In this context, recall the purpose of people-centered early warning as defined by the UN International Strategy for Disaster Reduction (UNISDR) during the Third International Conference on Early Warning (EWC III) in 2006:

To empower individuals and communities threatened by hazards to act in sufficient time and in an appropriate manner so as to reduce the possibility of personal injury, loss of life, damage to property and the environment, and loss of livelihoods.

Other important observations worth noting from the Policy Brief:

My one criticism of the report has to do with the comments in parentheses in this paragraph:

Rebuilding the local media infrastructure for sustained operations must be prioritized as aid efforts continue. This may be as simple as providing a generator to a radio station that has lost its electricity supply, using UN communications structures such as the World Food Program towers to relay local radio stations (though in politically complex environments this needs careful thought)…

The BBC’s Policy Brief focuses on the unmet need for information in humanitarian responses but leaves out of the equation “politically complex environments.” This is problematic. As the UNISDR remarked in it’s 2006 Global Survey of Early Warning Systems (PDF), “the occurrence of “natural” disasters amid complex political crises is increasingly widespread: over 140 natural disasters have occurred alongside complex political crises in the past five years alone.”

Operating in politically volatile, repressive environments and conflict zones presents a host of additional issues that the majority of policy briefs and reports tend to ignore. HHI’s research has sought to outline these important challenges and to highlight potential solutions both in terms of technology and tactics. 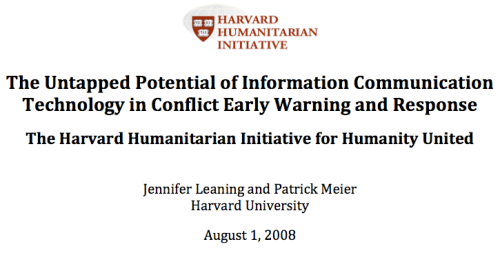 The importance technology design has been all but ignored in our field. We may continue to use every day communication tools and adopt them for our purposes, but these will inevitably come with constraints. Mobile phones were not designed for operation in hostile environments. This means, for example, that mobile phones don’t come preinstalled with encrypted SMS options. Nor are mobile phones designed to operate in a peer-to-peer (mesh) configuration, which would render mobile phones less susceptible to repressive regimes switching off entire mobile phone networks.

What are today’s most vexing problems in the field of humanitarian early warning and response? This is a question often posed by my colleague Ted Okada to remind us that we often avoid the most important challenges in the humanitarian field. It’s one thing to respond in a post-disaster environment with easy access to refugee populations and donor funding. It’s quite another to be operating in a conflict zone, with restrictions on mobility, with no clear picture of the effected population and with donors reluctant to fund experimental communication projects.

It is high time we focus our attention and resources on tackling the most vexing issues in our field since the solutions we develop there will have universal application elsewhere. In contrast, identifying solutions to the less vexing problems will be of little benefit to large humanitarian community operating in political complex environments. As my colleague Erik Hersman is fond of saying, “If it works in Africa, it’ll work anywhere.” I’ve been making a similar argument over the past year: “If it works in conflict zones, it’ll work anywhere.”