Towards an Emergency News Service?

The 2005 World Disasters Report stated that “information is a vital form of aid in itself [since] disaster affected people need information as much as water, food, medicine or shelter. Information can save lives, livelihoods and resources.”

As we know only too well, information is often one of the first casualties in crises: crippled communications and shattered transportation links present significant obstacles. Communication with beneficiaries is rarely high on the priority lists of many relief responders.

The Thomson Reuters Foundation is therefore proposing to tackle this problem with the creation of an Emergency Information Service (EIS). The concept is simple:

Thompson Reuters wants to send out teams of specialist reporters to cover unfolding disaster zones and channel vital information directly to affected communities. The teams would also interface with governments, the military, the United Nations, international NGOs and local charities.

I can see how this would address some of the current shortcomings, but I’m not convinced about sending in teams of reporters. For one, how will EIS deal with governments that refuse entry into their disaster effected regions? We need a less “egocentric” approach, one that seeks “the proper balance between the need for external assistance and the capacity of local people to deal with the situation” (Cardona 2004).

EIS’s reporting strategy appears to replicate the top-down, external approach to humanitarian response instead of empowering local at-risk communities directly so they can conduct their own reporting and communicating. For example, why not include a strategy to improve and expand citizen journalism in crisis zones?

In any case, I think EIS’s disseminating strategy includes some good ideas. For example:

In order for this to catch, ENS should be set up to provide services during times of non-disasters as well. 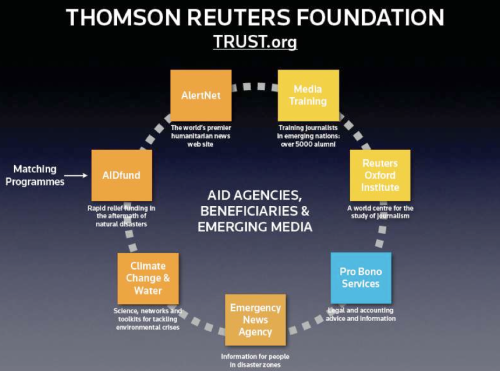 “The Thomson Reuters Foundation will soon launch a new website – www.trust.org – to serve as a gateway for all its activities. The Emergency News Agency and AlertNet will be core components of the new site. Trust.org will provide a single point of access for aid professionals, journalists, pro bono service providers, donors and members of the public. Telecommunications allowing, it could also serve as a powerful resource centre for communities affected by disasters.”

For more information on the Emergency News Service, please see this thinkpaper (PDF).

9 responses to “Towards an Emergency News Service?”