I just found an interesting piece on Internet censorship at arXiv, my favorite go-to place for scientific papers that are pre-publication. Entitled “Nation-State Routing: Censorship, Wiretapping and BGP,” this empirical study is possibly the first to determine the aggregate effect of national policies on the flow of international traffic.

As government control over the treatment of Internet traffic becomes more common, many people will want to understand how international reachability depends on individual countries and to adopt strategies either for enhancing or weakening the dependence on some countries.

States typically impose censorship to prevent domestic users from reaching questionable content. Some censorship techniques, however, “may affect all traffic traversing an [Autonomous System].” For example, Internet Service Providers (ISPs) in China, Britain and Pakistan block Internet traffic at the Internet Protocol (IP) level by “filtering based on IP addresses and URLs in the data packets, or performing internal prefix hijacks, which could affect the international traffic they transit.”

The scope and magnitude of this affect is unclear. What we do know is that one may intentionally or by accident apply censorship policies to international traffic, as demonstrated by the global YouTube outage last year as a result of a domestic Pakistani policy directive.

The authors therefore developed a framework to study interdomain routing at the nation-state level. They first adapted the “Betweeness Centrality” metric from statistical physics to measure the importance, or centrality, of each country to Internet reachability. Second, they designed, implemented and validated a Country Path Algorithm (CPA) to infer country-paths from a pair of source and destination IP addresses.

The table below shows Country Centrality (CC) computed directly from Trace Route (TR) and Border Gate Protocol (BGP). The closer the number is to one, the more impact that country’s domestic Internet censorship policies has on international Internet traffic. 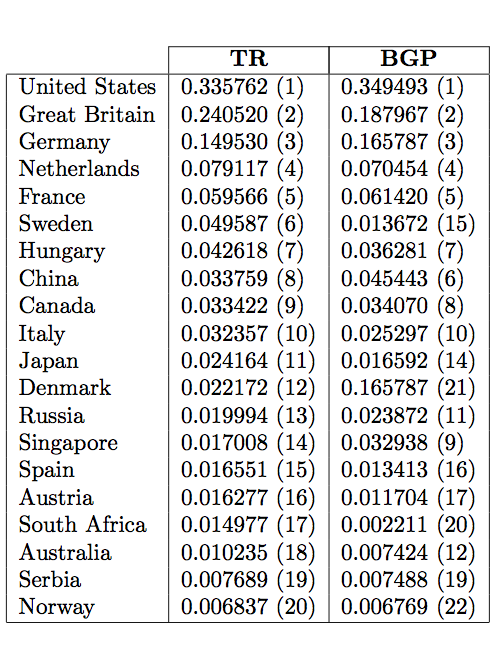 The second table below lists both Country Centrality (CC) and Strong Country Centrality (SCC). The latter measures how central countries are when alternative routes are considered. When SCC equals one, this suggests a country is completely unavoidable. 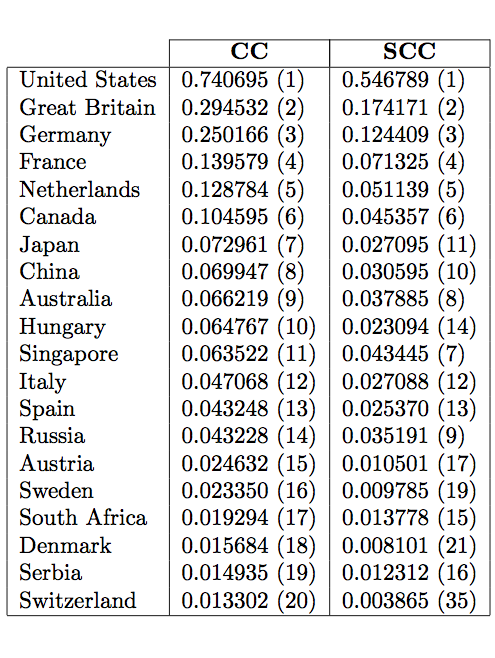 “Collectively, these results show that the ‘West’ continues to exercise disproportionate influence over international routing, despite the penetration of the Internet to almost every region of the world, and the rapid development of China and India.”

This last table below lists CC and SCC measures for authoritarian countries that are known for significant domestic censorship of Internet content. Aside from China, “these countries have very little influence over global reachability.”

The authors of the study point to a number of interesting questions for future research. For example, it would be interesting to know how the centrality result above change over time, i.e., which countries are becoming more central over time, and why?

Another important question is what economically driven strategies single countries (or small coalitions of countries) could adopt to increase their own centrality or to reduce that of other countries?

One final and particularly important question would to find out what fraction of domestic paths are actually routed through another country? This is important because the answer to this question would “provide insight into the influence that foreign nations have over a country’s domestic routing and security, and would shed light on […] whether warrantless tapping on links in one country to another might inadvertently capture some purely domestic traffic.”