My colleague Nils Weidmann recently moved to Princeton to start his post-doc with the Empirical Studies of Conflict group. Nils is always up to something interesting. His latest research project focused on mapping election fraud in Afghanistan.

Nils analyzed voter turn-out at voting stations using Beber and Scacco’s last digit method, which was used to analyze the Iran elections earlier this year. The method is very straightforward. In a free and fair election, the last digits (numbers “0” through “9”) for voting station turn-out should occur in equal frequency, i.e., should be “random.” Any non-randomness in this distribution may thus indicator manipulation.

For example,  the distribution below for Helmand province is clearly not random since the digit “0” occurs far more frequently than the other digits.

Provinces with non-random distribution of last digits for voting stations can then be mapped. 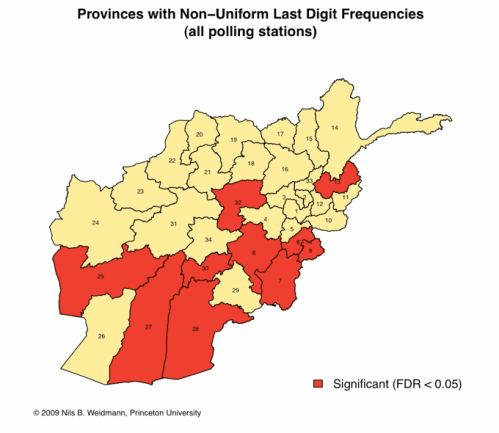 As Nils points out, “despite the fact that the certified results contain almost no suspicious stations anymore, evidence of manipulation remains for four provinces.” See map below. 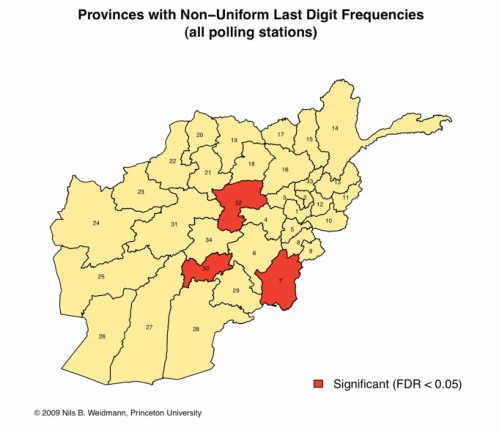 It would be great to super impose all the maps that Nils produced in order to compose a vote fraud probability index. I’d also be curious to know how projects by GeoCommons and Alive in Afghanistan might contribute to the research that Nils is pursuing, and vice versa. 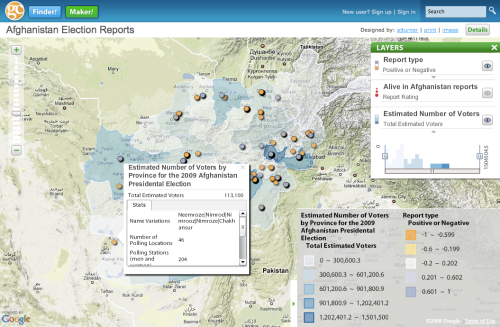 One response to “Mapping Election Fraud in Afghanistan”