What do Papyrus rolls and Twitter have in common? Both were used as a means of “instant” communication. Indeed, a careful reading of history reveals just how ancient social media really is. Further, the questions we pose about social media today have already been debated countless times over hundreds of years. Author Tom Standage traces this fascinating history of social media in his thought-provoking book Writing on the Wall: Social Media – The First 2,000 Years. In so doing, Tom forces us to rethink our understanding and assumptions of social media use today. To be sure, this book will change the way you think about social media. I highlight some of the most intriguing insights below.

Marcus Tullius Cicero (106 BC to 43 BC) was a Roman philosopher, politician and lawyer. When Julius Caesar relocated him from Rome to a distant output, Cicero drew on an elaborate communication system and social network to stay abreast of events in the capital. Printing presses did not exist at the time, nor did paper for that matter. So papyrus rolls were used to exchange letters and other documents, which were in turn copied, commented on and shared. In this way, Cicero received timely updates on politics and gossip coming from Rome, having asked his contacts in the capital to write him daily. Common abbreviations were soon used to save space and time, much like today’s acronyms on social media (e.g., BTW, AFAIK) . SVBEEV (si vales, bene est, ego valeo), for example, was a popular acronym for “if you are well, that is good, I am well.” Often, letters were also quoted in other letters, much like blog posts today. In fact, some letters during Cicero’s time were “addressed to several people and were written [….] to be posted in public for general consumption.”

The enabling infrastructure of this information system was slavery—many of the scribes and messengers who copied and delivered messages were slaves. In short, “slaves were the Roman equivalent of broadband.” Friends were also used to carry letters across cities, countries and indeed continents. “One advantage of getting friends to pass on the news was that they could highlight items of interest and add their own comments or background information in the covering letters they sent along with the copied letters. The combination of personal letters and impersonal news was more valuable then either in isolation, because each provided additional context for the other. And then, as now, one was far more likely to pay attention if a friend said it was important or expressed an opinion about it.” 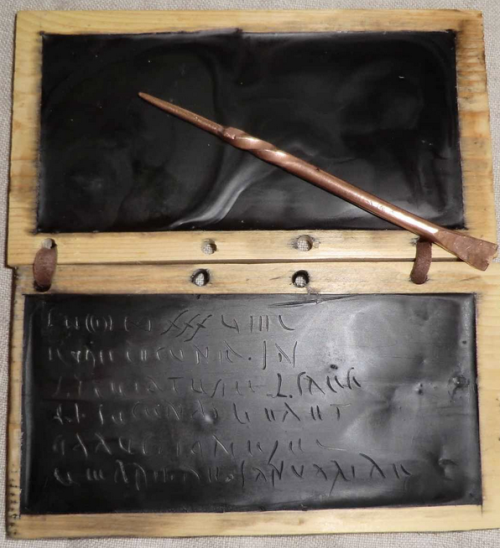 Not all letters during Cicero’s time were sent via papyrus rolls. Wax tablets (pictured above) mounted in wooden frames “that fold together like a book” were used for messages sent over a short distance, which required a quick reply. “To modern eyes, these tablets […] look strikingly similar to tablet computers. The recipient’s response could be scratched onto the same tablet, and the messenger who had delivered it would then take it straight back to the sender.” Earlier, in Mesopotamia, “letters were written in cuneiform on small clay tablets that fit neatly into the palm of the hand. Letters almost always fit onto a single tablet, which imposed a limit on the length of the message.” One can’t help but draw parallels with smartphones and Twitter.

Graffiti was also served as a social media some 2,000 years ago. In Pompeii, for example, ancient graffiti was found on the streets, in bars and also in private houses. Writing graffiti was not regarded as defacement at the time. “The most prominent messages, painted in large letters, were political slogans expressing support for candidates running for election […].” Criticisms of political candidates were also found in Pompeii’s ancient graffiti, as were advertisements for events and even rental vacancies. As author Tom Standage notes, “the great merit of graffiti is that one did not have to be a magistrate […] to add one’s voice to the conversation; the walls were open to everyone.”

The following graffiti messages found in Pompeii reveal what ordinary people were thinking about:

“The man I am having dinner with is a barbarian”

These provided “glimpses of everyday activities, rather like status updates on modern social networks.” In addition, graffiti messages were left near inns as advice to potential customers, serving both positive and negative reviews, much like today’s Yelp and related websites. “More practical still were the messages addressed to specific people.” Examples include:

“Samius to Cornelius: go hang yourself!”

“Gaius Sabinus says a fond hello to Statius. Traveler, eat bread in Pompeii but go to Nuceria to drink. At Nuceria, the drinking is better”

According to Tom, there are “even a few examples of dialogues, where an inscription inspired comments or responses.” Not surprisingly, perhaps, “the sexual boasts and scatological humor familiar from modern graffiti in public lavatories can also be found in Pompeii […].” Like much of social media today, a lot of the ancient graffiti that appeared on the walls of Pompeii was of no interest to anyone. As one graffiti message, which appeared four times in the ancient city laments: “Oh wall, I am amazed you haven’t fallen down, since you bear the tedious scribblings of so many writers.”

In the 1500’s, as printing presses multiplied and religious pamphlets vent viral, there was growing anxiety about the potential spread of false information (and seditious books). This ignited a heated debate on whether printing should be tightly regulated. In England, the company that had been given draconian powers to destroy unregistered printing presses and books that painted the Monarchy in bad light. This company argued the following:

“If every man may print, that is so disposed, it may be a means, that heresies, treasons, and seditious libelles shall be too often dispersed, whereas if only known men do print this inconvenience is avoided.”

Again, the parallels with today’s debate over the reliability of crowdsourcing and user-generated content are clear. But the growing desire for new in Europe during the Thirty Year’s War (early 1600’s) made crowdsourcing a compelling approach for the collection of news reports. Indeed, the increasing demand for “news about the war led to the appearance of a new type of publication: the coranto. This was a single sheet, printed on both sides, with a compilation of items, usually letters or eyewitness accounts of battles or other notable events. […]. Being anonymous, corantos were regarded as less trustworthy than handwritten news letters, which often related news at first hand.” So a backlash against corantos was inevitable, with criticism that we hear today about social media. For example, one critic at the time “thought it dangerous for ordinary people to have greater access to news, because printing allowed rumors and falsehoods to spread, causing social and political instability.”

In any event, “the pamphlets of the 1640’s existed in an interconnected web, constantly referring to, quoting, or in dialogue with each other, like blog posts today.” As this information web continued continued to scale, “the bewildering variety of new voices and formats made it very difficult to work out what was going on. As one observer put it, ‘oft times we have much more printed than is true.” But John Milton didn’t buy the arguments for regulating written speech. Milton countered that no one is truly capable of acting as a reasonable censor since humans are susceptible to  error or bias. While press freedom would allow “bad or erroneous works to be printed,” Milton argued that this was actually a good thing. “If more readers came into contact with bad ideas because of printing, those ideas could be more swiftly and easily disproved.” In essence, Milton was making the case for crowdsourced verification of information. Similar arguments have recently been made.

Meanwhile, at the coffee house. The first caffeinated drink reached Europe around the 1600’s. “And along with the coffee bean itself came the institution of the coffeehouse, which had become an important meeting place and source of news in the Arab world.” The same was to happen in Europe, where coffeehouses served the same function as today’s co-working spaces and innovation hubs/labs. Some coffee houses were “thronged with businessmen, who would keep regular hours at particular coffee houses so that their associates would know where to find them, and who used coffee houses as offices, meeting rooms, and venues for trade.” Indeed, “the main business of coffee houses was the sharing and discussion of news and opinion […].” In sum, “coffee houses were an alluring social platform for sharing information.”

There’s a lot more to “Writing on the Wall” than summarized above, such as the tension between press regulation and freedom, how the era of centralized, mass media dominance was a two-century anomaly in the natural course of social media, the origins of the political economy of mass media, etc. So I highly recommend this book to iRevolution readers. I, for one, relished it.

This entry was posted in Social Media and tagged Ancient, Book, history. Bookmark the permalink.