The Planetary Response Network (PRN) has been in the works for well over a year, so we’re excited to be going fully public for the first time. PRN a joint initiative between Zooniverse (Brook Simmons), Planet Labs (Alex Bakir) and myself at QCRI. The purpose of Zoomanitarians is to accelerate disaster damage assessments by leveraging Planet Labs’ unique constellation of 28 satellites and Zooniverse’s highly scalable microtasking platform. As I noted in this earlier post, digital volunteers from Zooniverse tagged well over 2 million satellite images (of Mars, below) in just 48 hours. So why not invite Zooniverse volunteers to tag millions of images taken by Planet Labs following major disasters (on Earth) to help humanitarians accelerate their damage assessments? 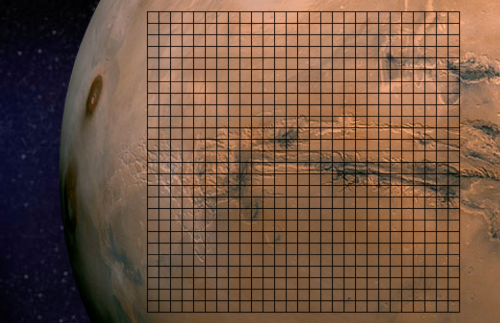 That was the question I posed to Brooke and Alex in early 2013. “Why not indeed?” was our collective answer. So we reached out to several knowledgeable colleagues of mine including Kate Chapman from Humanitarian OpenStreetMap and Lars Bromley from UNOSAT for their feedback and guidance on the idea.

We’ll be able to launch our first pilot project later this year thanks to Kate who kindly provided us with very high-resolution UAV/aerial imagery of downtown Tacloban in the Philippines. Why do we want said imagery when the plan is to use Planet Labs imagery? Because Planet Labs imagery is currently available at 3-5 meter resolution so we’ll be “degrading” the resolution of the aerial imagery to determine just what level and type of damage can be captured at various resolutions as compared to the imagery from Planet Labs. The pilot project will therefore serve to (1) customize and test The Planetary Response Network’s microtasking platform and (2) determine what level of detail can be captured at various resolutions.

We’ll then spend the remainder of the year improving the platform based on the results of the pilot project during which time I will continue to seek input from humanitarian colleagues. Zooniverse’s microtasking platform has already been stress-tested extensively over the years, which is one reason why I approached Zooniverse last year. The other reason is that they have over 1 million digital volunteers on their list-serve. Couple this with Planet Labs’ unique constellation of 28 satellites, and you’ve got the potential for near real-time satellite imagery analysis for disaster response. Our plan is to produce “heat maps” based on the results and to share shape files as well for overlay on other maps.

It took imagery analysts well over 48 hours to acquire and analyze satellite imagery following Typhoon Yolanda. While Planet Labs imagery is not (yet) available at high-resolutions, our hope is that PRN will be able to acquire and analyze relevant imagery within 12-24 hours of a request. Several colleagues have confirmed to me that the results of this rapid analysis will also prove invaluable for subsequent, higher-resolution satellite imagery acquisition and analysis. On a related note, I hope that our rapid satellite-based damage assessments will also serve as a triangulation mechanism (ground-truthing) for the rapid social-media-driven damage assessments carried out using the Artificial Intelligence for Disaster Response (AIDR) platform & MicroMappers.

While much work certainly remains, and while The Planetary Response Network is still in the early phases of research and development, I’m nevertheless excited and optimistic about the potential impact—as are my colleagues Brooke and Alex. We’ll be announcing the date of the pilot later this summer, so stay tuned for updates!