I am particularly interested in riots since part of my doctoral research focuses on the strategic and tactical uses of digital technology to organize, mobilize and coordinate protest events in repressive contexts. On this note, Alternet just published this piece by Andrew Lam on the “Greek Riots and the News Media in the Age of Twitter,” which echoes some of the issues raised during the panel discussion I participated in last week in  DC on the decline of foreign reporting and rise of citizen journalism.

The Greek riots are a classic case of iRevolutions in the making, i.e., individuals and networks (hyper) empowered by linking technologies like Facebook, Twitter and SMS. What follows first are my thoughts on the two main points that the Andrew highlights in his piece. The second part of this post sheds light on the dynamics of riots by drawing on complexity science and Clay Shirky’s work. 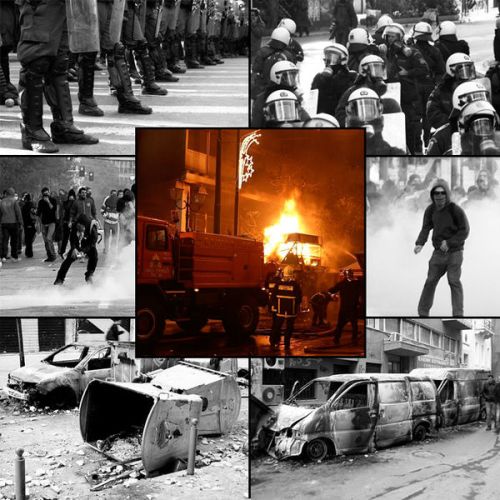 Initial Conditions: The riots were sparked after a 15-year old student “died from a gunshot wound in his heart, inflicted by a policeman following an altercation between a police patrol and a small group of youths in Athens” (1). Thousands of young people took to the streets after quickly spreading the news via Facebook, Twitter and SMS.

But as Andrew points out, no one bothered to verify or investigate the police officer’s claim that he was innocent: “When the coroner’s report came out several days later, it said the bullet was dented, meaning it ricocheted before hitting the teenager, but the information changed nothing. Athens had been burning for several nights, and the people, whose rage fueled the flames, couldn’t care less for facts.”

These valid points aside, my first question is what took the coroner so long? Extracting a bullet (pardon the morbidity) is not exactly brain surgery.  If said coroner had a mobile phone, s/he could have taken a picture of the dented bullet and shared it as widely as possible hoping that it would go viral. I have no idea how effective that would have been, but it’s a thought. The second question I have is whether any investigative journalists were pressing the coroner to get on with it?

Future Conditions: Andrew notes that “professional front line reporters may very well be on the way to being redundant in a world where, according to Reuters Director of News Media Development, Chris Cramer, ‘Every key event going forward will be covered by members of the public, and not by traditional journalists.’” (I just checked the Wikipedia page on the riots and it was edited close to 200 times within 48 hours of the shooting).

However, as I mentioned during last week’s panel, the mainstream media has an increasingly more important social service to play in the Twitter Age: distinguishing fact from fiction. Andrew is thus spot on when he writes that “the role of the mature news organization […] is to filter real news from pseudo news, rather than treating all content as equal.”

Complexity Science: Power laws are a defining signature of complex systems. The Richter scale, which relates earthquake frequencies to magnitude, is probably the most well known power law. As we all know, there are many small tremors every day but only a few major earthquakes every century. As it happens, protests such as strikes also follow a power law distribution. See for example this piece by Michael Bigs in the American Journal of Sociology. Here’s the abstract:

Historians have persistently likened strike waves to wildfires, avalanches, and epidemics. These phenomena are characterized by a power-law distribution of event sizes. This kind of analysis is applied to outbreaks of class conflict in Chicago from 1881 to 1886. Events are defined as individual strikes or miniature strike waves; size is measured by the number of establishments or workers involved. In each case, events follow a power law spanning two or three orders of magnitude. A similar pattern is found for strikes in Paris from 1890 to 1899. The “forest fire” model serves to illustrate the kind of process that can generate this distribution.

One classic way to illustrate this is by using the analogy of grains of sand falling on a sand pile. Eventually, small and large avalanches begin to occur at different frequencies that follow a power law.

The study of complex systems is often called the study of history. The sand pile becomes increasingly unstable over time as grains of sand cause “fingers of instability” to run through the structure, like fissures running across a wine glass or cracks in the earth as an earthquake unloads the built up tension. If you want to understand the vulnerability of the sand pile of a “Richter 9” earthquake, dissecting the falling grains will give you little insight. In other words, the answer lies in the past, in the evolution of the sand pile.

I make this point to reinforce the fact that the recent shooting and riots in Greece should be understood in context. The incident was  but one of several that befell Mount Olympus. As Katrin Verclas and others have commented (below) in response to this blog post, “the disenchantment of Greek students, the mistrust in and corruption of the right-wing government,”  as well as the “many acts of police brutality and incompetence through the years,” provides the historical context behind the shooting. “This is why people wouldn’t wait for the coronary report. There were many things wrong even before the shooting and the coronary report.”

Networks Analysis: One way to think about the impact of the information revolution on the ability of groups to mobilize and organize is to use the analogy of disease contagion, which also follows a power law distribution. As Clay Shirky writes, “The classic model for the spread of disease looks at three variables—likelihood of infection, likelihood of contact between any two people, and overall size of population. If any of those variables increases, the overall spread of disease increases as well.”

The reason I raise this issue of power laws and epidemics of information is to address the issue of rumors. As Andrew Lam writes, “the streamlining of news [via Twitter and SMS] makes the story skeletal and thin, bordering on becoming rumor and hearsay.” Countering false rumors  in a highly connected network may require a systems approach since command-and-control is unlikely to work (short of switching the network off).

This is where the work by Malcom Gladwell, Mark Buchanan and and the Santa Fe Institute’s (SFI) research might shed some light on the viral cure for false rumors in the Twitter Age.