My colleague Jen Ziemke did her dissertation research on identifying patterns of civil war abuse in Angola. In particular, she sought to determine why combatants sometimes target civilians while at other time refrain from doing so. She explored this question by looking for both spatial and temporal patterns of conflict. 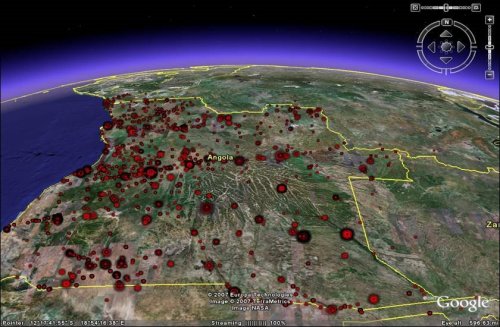 Jen was one of the first scholars to do applied research in the field of crisis mapping and continues to be an invaluable source of expertise on the subject. For her doctoral work, she coded and geo-referenced 41 years of conflict data on Angola by drawing on more than 180 different sources. This yielded a stunning 9,216 events of violence between 1961 and 2002.

Jen’s spatial analysis of the data yielded the following conclusion:

Resource wealth, ethnicity, and ‘war by other means’ do not adequately explain the observed patterns of civilian abuse in the Angolan civil war. However, losses on the battlefield escalate patterns of violence against civilians. Belligerent actors do not always abuse civilians; rather they participate in these behaviors in relatively predictable ways: when they are losing and as the war progresses.  In short, a theory of loss best explains the variation in levels of civilian abuse across time in the Angolan war than any other explanation.

More on Jen’s research is available in a paper (PDF) she presented at Yale University last year entitled: “From Battles to Massacres: Explaining the patterns of civil war abuse in Angola, 1961-2002.”