I’ve already blogged about what an ecosystem approach to conflict early warning and response entails. But I have done so with a country focus rather than thinking globally. This blog post applies a global perspective to the ecosystem approach given the proliferation of new platforms with global scalability.

This is an excellent video visualizing food web dynamics produced by researchers affiliated with the Santa Fe Institute (SFI):

At the smallest unit of analysis, individuals are the most primary producers of information. The mainstream media, social media, natural language parsing tools, crowdsourcing platforms, etc, arguably comprise the primary consumers of that information. Secondary consumers are larger organisms such as the global Emergency Information Service (EIS) and the Global Impact and Vulnerability Alert System (GIVAS).

These newly forming platforms are at different stages of evolution. EIS and GIVAS are relatively embryonic while the Global Disaster Alert and Coordination Systems (GDACS) and Google Earth are far more evolved. A relatively new organism in the Info Web is the UAV as exemplified by ITHACA. The BrightEarth Humanitarian Sensor Web (SensorWeb) is further along the information chain while Ushahidi’s Crisis Mapping platform and the Swift River driver are more mature but have not yet deployed as a global instance.

InSTEDD’s GeoChat, Riff and Mesh4X solutions have already iterated through a number of generations. So have ReliefWeb and the Humanitarian Information Unit (HIU). There are of course additional organisms in this ecosystem, but the above list should suffice to demonstrate my point.

What if we connected these various organisms to catalyze a super organism? A Global System of Systems (GSS)? Would the whole—a global system of systems for crisis mapping and early warning—be greater than the sum of its parts? Before we can answer this question in any reasonable way, we need to know the characteristics of each organism in the ecosystem. These organisms represent the threads that may be woven into the GSS, a global web of crisis mapping and early warning systems. 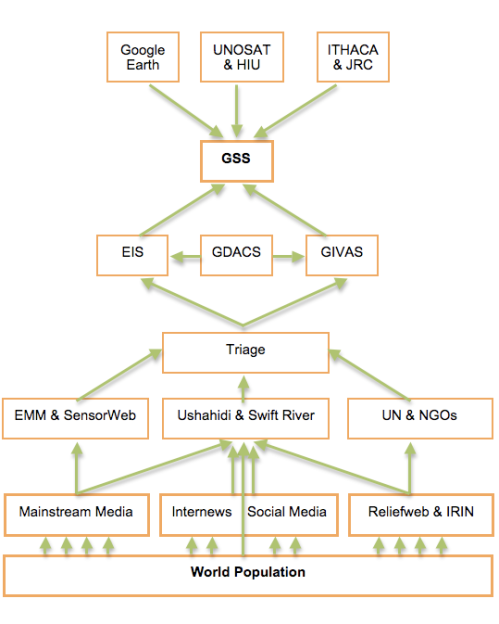 Emergency Information Service (EIS) is slated to be a unified communications solution linking citizens, journalists, governments and non-governmental organizations in a seamless flow of timely, accurate and credible information—even when local communication infrastructures are rendered inoperable. This feature will be made possible by utilizing SMS as the communications backbone of the system.

In the event of a crisis, the EIS team would sift, collate, make sense of and verify the myriad of streams of information generated by a large humanitarian intervention. The team would gather information from governments, local media, the military, UN agencies and local NGOs to develop reporting that will be tailored to the specific needs of the affected population and translated into local languages. EIS would work closely with local media to disseminate messages of critical, life saving information.

Global Impact and Vulnerability Alert System (GIVAS) is being designed to closely monitor vulnerabilities and accelerate communication between the time a global crisis hits and when information reaches decision makers through official channels. The system is mandated to provide the international community with early, real-time evidence of how a global crisis is affecting the lives of the poorest and to provide decision-makers with real time information to ensure that decisions take the needs of the most vulnerable into account.

Ushahidi integrates web, mobile and dynamic mapping technology to crowdsource crisis information. The platform uses FrontlineSMS and can be deployed quickly as a crisis unfolds. Users can visualize events of interest on a dynamic map that also includes an animation feature to visualize the reported data over time and space.

Swift River is under development but designed to validate crowdsourced information in real time by combining machine learning for predictive tagging with human crowdsourcing for filtering purposes. The purpsose of the platform is to create veracity scores to denote the probability of an event being true when reported across several media such as Twitter, Online news, SMS, Flickr, etc.

GeoChat and Mesh4X could serve as the nodes connecting the above platforms in dynamic ways. Riff could be made interoperable with Swift River.

Can such a global Info Web be catalyzed? The question hinges on several factors the most important of which are probably awareness and impact. The more these individual organisms know about each other, the better picture they will have of the potential synergies between their efforts and then find incentives to collaborate. This is one of the main reasons I am co-organizing the first International Conference on Crisis Mapping (ICCM 2009) next week.

5 responses to “Evolving a Global System of Info Webs”