What United Airlines can Teach the World Bank about Mobile Accountability

Flight delays can sometimes lead to interesting discoveries. As my flight to DC was delayed for a third frustrating hour, I picked up the United Airlines in-flight magazine and saw this:

United just launched a novel feedback program that the World Bank and other development organizations may want to emulate given their interest in pro-moting upward accountability. From the United Press Release:

“Behind every great trip is an airline of great people. Now, when you receive excellent customer service from an eligible United […] employee, you can enter him or her in United’s Outperform Recognition Program. If the employee you enter is a winner in our random drawing for cash prizes, you win, too. With just a few clicks on the United mobile app, you could have the chance to win MileagePlus award miles or even roundtrip tickets.”

This participatory and crowdsourced recognition program is brilliant for several reasons. First, the focus is on identifying positive deviance rather than generating negative feedback. In other words, it is not a complaints but a rewards system. Second, the program is incentive-based with shared proceeds. Not only do United employees have the chance to make some extra cash (average salary of flight attendants is $36,128), those who nominate employees for outstanding service also share in the proceeds in the form of free tickets and airline miles. 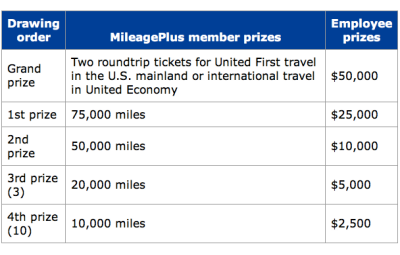 Third, United didn’t develop a new, separate smartphone app or technology for this recognition program; they added the feature directly into the existing United app instead. (That said, they ought to give passengers the option of submitting an entry via United’s website as well since not everyone will be comfortable using a smartphone app). I’d also recommend they make some of the submissions available on a decidate section of the United website to give users the option to browse through some of the feedback (and even digg up those they like the most).

I wonder whether other airlines in the StarAlliance network will adopt the same (or similar) recognition program. I also wonder whether donors like the World Bank ought to develop a similar solution (perhaps SMS-based) and require the use of this service for all projects funded by the Bank.