My doctoral dissertation compared the use of live mapping technology in Egypt and the Sudan during 2010. That year was the first time that Ushahidi was deployed in those two countries. So it is particularly interesting to see the technology used again in both countries in 2012. Sudanese activists are currently using the platform to map #SudanRevolts while Egyptian colleagues have just used the tool to monitor the recent elections in their country. 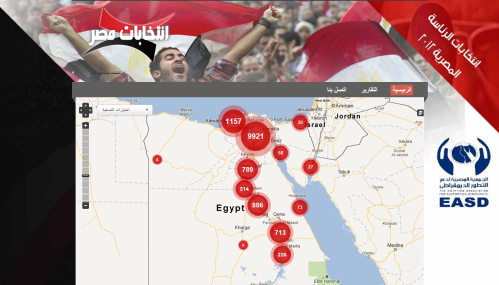 Analyzing the evolution of live mapping technology use in non-permissive environments ought to make for a very interesting piece of research (any takers?). In the case of Egypt, one could compare the use of the same technology and methods before and after the fall of Mubarak. In 2010, the project was called U-Shahid. This year, the initiative was branded as the “Egypt Elections Project.”

According to my colleagues in Cairo who managed the interactive map, “more than 15 trainers and 75 coordinators were trained to work in the ‘operation room’ supporting 2200 trained observers scattered all over Egypt. More than 17,000 reports, up to 25000 short messages were sent by the observers and shown on Ushahid’s interactive map. Although most reports received shown a minimum amount of serious violations, and most of them were indicating the success of the electoral process, our biggest joy was being able to monitor freely and to report the whole process with full transparency.” 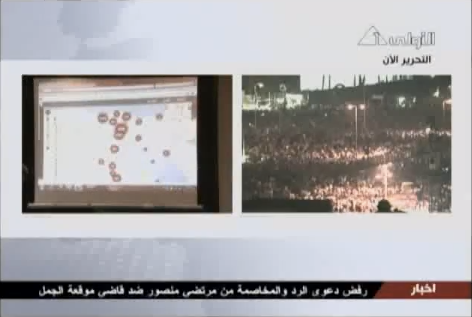 Contrast this situation with how Egyptian activists struggled to keep their Ushahidi project alive under Mubarak in 2010. Last week, the team behind the current live map was actually interviewed by state television (picture above), which was formerly controlled by the old regime. Interestingly, the actual map is no longer the centerpiece of the project when compared to the U-Shahid deploy-ment. The team has included and integrated a lot more rich multimedia content in addition to data, statistics and trends analysis. Moreover, there appears to be a shift towards bounded crowdsourcing rather than open crowd-sourcing as far as election mapping projects go.

These two live mapping projects in Egypt and the Sudan are also getting relatively more traction than those in 2010. Some 17,000 reports were mapped in this year’s election project compared to 2,700 two years ago. Apparently, “millions of users logged into the [Egypt Project Elections] site to check the outcome of the electoral process,” compared to some 40,000 two years ago. Sudanese activists in Khartoum also appear to be far better organized and more agile at leverage social media channels to garner support for their movement than in 2010. Perhaps some of the hard lessons from those resistance efforts were learned.

This learning factor is key and relates to an earlier blog post I wrote on “Technology and Learning, Or Why the Wright Brothers Did Not Create the 747.” Question is: do repressive regimes learn faster or do social movements operate with more agile feedback loops? Indeed, perhaps the technology variable doesn’t matter the most. As I explained to Newsweek a while back, “It is the organiza-tional structure that will matter the most. Rigid structures are unable to adapt as quickly to a rapidly changing environment as a decentralized system. Ultimately, it is a battle of organizational theory.” In the case of Egypt and Sudan today, there’s no doubt that activists in both countries are better organized while the technologies themselves haven’t actually changed much since 2010. But better organization is a necessary, not sufficient, condition to catalyze positive social change and indirect forms of democracy.

Pierre Rosanvallon (2008) indentifies three channels whereby civil society can hold the state accountable during (and in between) elections, and independent of their results.

“The first refers to the various means whereby citizens (or, more accurately, organizations of citizens) are able to monitor and publicize the behavior of elected and appointed rulers; the second to their capacity to mobilize resistance to specific policies, either before or after they have been selected; the third to the trend toward ‘juridification’ of politics when individuals or social groups use the courts and, especially, jury trials to bring delinquent politicians to judgment.”

Live maps and crowdsourcing can be used to monitor and publicize the behavior of politicians. The capacity to mobilize resistance and bring officials to judgment may require a different set of strategies and technologies, however. Those who don’t realize this often leave behind a cemetery of dead maps.

3 responses to “Evolution in Live Mapping: The 2012 Egyptian Presidential Elections”