Crowdsourcing Disaster Response in Iran: How Volunteers Bypassed the State

Posted on August 22, 2012 | Comments Off on Crowdsourcing Disaster Response in Iran: How Volunteers Bypassed the State

The double earthquakes that recently struck Iran’s East Azerbaijan Province killed over 300 people and left thousands more homeless. Iranians are par-ticularly adept at using Facebook and other social media platforms. So I was hardly surprised to learn that Iranian journalists launched a Facebook group to collect and and share reliable information related to the earthquake’s impact. Some of these journalists also visited the disaster-struck region to document the deva-station and aid in the relief efforts.

Existing Facebook groups were also used to bring help to those in need. One such group, called Female Equals Male, encouraged followers to donate blood at centers across the country. An Iranian who works at one of these centers was taken aback by the response: “… it was the first time that I have ever seen people being so eager to donate blood. It has always been us, pushing, advertising and asking people to do so.” Female Equals Male already had over 140,000 “likes” before the earthquake.

Like their Egyptian counterparts who crowdsourced volunteer convoys into Libya last year, young Iranians also organized caravans to bring relief to victims of the earthquake in the north of the country. They spontaneously organized a charity effort using SMS, Facebook and phone calls to collect money and relief supplies. “But instead of handing over their collection to the Iranian Red Crescent Society —which is close to the government—as the authorities had asked in the state media, these youths were determined to transport it themselves to the most remote hill villages ravaged by the earthquakes […].” And so they did. 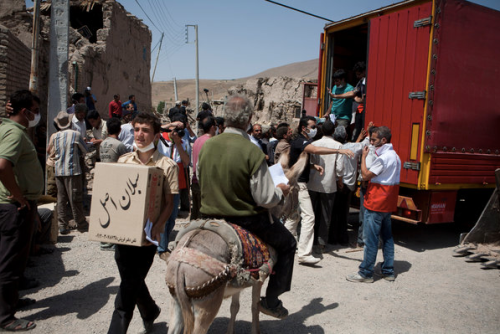 There seem to be more and more examples like this one occurring–ordinary citizens and volunteers taking (disaster response) matters into their own hands:

Of course, this phenomenon is hardly new. First responders, by definition, are the disaster affected population themselves. What is new is that these people-centered crowdsourced efforts are increasingly public and easier to coordinate thanks to social networking platforms and mobile technologies. “In Iran, where the state is involved in all layers of society, it is exceptional for a group of young people to organize a public effort of disaster relief” (NYTimes). As I have hinted in previous blog posts, this ability to mobilize, organize and coordinate can have important political ramifications.