Any CrisisMapper who followed the social firestorm surrounding the gun map published by the Journal News will have noted direct parallels with the perils of Crisis Mapping. The digital and interactive gun map displayed the (lega-lly acquired) names and addresses of 33,614 handgun permit holders in two counties of New York. Entitled “The Gun Owner Next Door,” the project was launched on December 23, 2012 to highlight the extent of gun proliferation in the wake of the school shooting in Newtown. The map has been viewed over 1 million times since. This blog post documents the consequences of the gun map and explains how to avoid making the same mistakes in the field of Crisis Mapping.

The backlash against Journal News was swift, loud and intense. The interactive map included the names and addresses of police officers and other law enforcement officials such as prison guards. The latter were subsequently threatened by inmates who used the map to find out exactly where they lived. Former crooks and thieves confirmed the map would be highly valuable for planning crimes (“news you can use”). They warned that criminals could easily use the map either to target houses with no guns (to avoid getting shot) or take the risk and steal the weapons themselves. Shotguns and hand-guns have a street value of $300-$400 per gun. This could lead to a proliferation of legally owned guns on the street.

The consequences of publishing the gun map didn’t end there. Law-abiding citizens who do not own guns began to fear for their safety. A Democratic legislator told the media: “I never owned a gun but now I have no choice […]. I have been exposed as someone that has no gun. And I’ll do anything, anything to protect my family.” One resident feared that her ex-husband, who had attempted to kill her in the past, might now be able to find her thanks to the map. There were also consequences for the journalists who published the map. They began to receive death threats and had to station an armed guard outside one of their offices. One disenchanted blogger decided to turn the tables (reverse panopticon) by publishing a map with the names and addresses of key editorial staffers who work at  Journal News. The New York Times reported that the location of the editors’ children’s schools had also been posted online. Suspicious packages containing white powder were also mailed to the newsroom (later found to be harmless).

News about a burglary possibly tied to the gun map began to circulate (although I’m not sure whether the link was ever confirmed). But according to one report, “said burglars broke in Saturday evening, and went straight for the gun safe. But they could not get it open.” Even if there was no link between this specific burglary and the gun map, many county residents fear that their homes have become a target. The map also “demonized” gun owners. 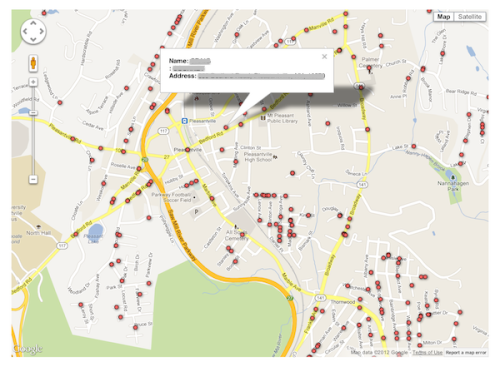 After weeks of fierce and heated “debate” the Journal News took the map down. But were the journalists right in publishing their interactive gun map in the first place? There was nothing illegal about it. But should the map have been published? In my opinion: No. At least not in that format. The rationale behind this public map makes sense. After all, “In the highly charged debate over guns that followed the shooting, the extent of ownership was highly relevant. […] By publishing the ‘gun map,’ the Journal News gave readers a visceral understanding of the presence of guns in their own community.” (Politico). It was the implementation of the idea that was flawed.

I don’t agree with the criticism that suggests the map was pointless because criminals obviously don’t register their guns. Mapping criminal activity was simply not the rationale behind the map. Also, while Journal News could simply have published statistics on the proliferation of gun ownership, the impact would not have been as … dramatic. Indeed, “ask any editor, advertiser, artist or curator—hell, ask anyone whose ever made a PowerPoint presentation—which editorial approach would be a more effective means of getting the point across” (Politico). No, this is not an endorsement of the resulting map, simply an acknowledgement that the decision to use mapping as a medium for data visualization made sense.

The gun map could have been published without the interactive feature and without corresponding names and addresses. This is eventually what the jour-nalists decided to do, about four weeks later. Aggregating the statistics would have also been an option in order to get away from individual dots representing specific houses and locations. Perhaps a heat map that leaves enough room for geographic ambiguity would have been less provocative but still effective in de-picting the extent of gun proliferation. Finally, an “opt out” feature should have been offered, allowing those owning guns to remove themselves from the map (still in the context of a heat map). Now, these are certainly not perfect solutions—simply considerations that could mitigate some of the negative consequences that come with publishing a hyper-local map of gun ownership.

The point, quite simply, is that there are various ways to map sensitive data such that the overall data visualization is rendered relatively less dangerous. But there is another perhaps more critical observation that needs to be made here. The New York Time’s Bill Keller gets to the heart of the matter in this piece on the gun map:

“When it comes to privacy, we are all hypocrites. We howl when a newspaper publishes public records about personal behavior. At the same time, we are acquiescing in a much more sweeping erosion of our privacy —government surveillance, corporate data-mining, political micro-targeting, hacker invasions—with no comparable outpouring of protest. As a society we have no coherent view of what information is worth defending and how to defend it. When our personal information is exploited this way, we may grumble, or we may seek the largely false comfort of tweaking our privacy settings […].”

In conclusion, the “smoking guns” (no pun intended) were never found. Law enforcement officials and former criminals seemed to imply that thieves would go on a rampage with map in hand. So why did we not see a clear and measurable increase in burglaries? The gun map should obviously have given thieves the edge. But no, all we have is just one unconfirmed report of an unsuccessful crime that may potentially be linked to the map. Surely, there should be an arsenal of smoking guns given all the brouhaha.

In any event, the controversial gun map provides at least six lessons for those of us engaged in crisis mapping complex humanitarian emergencies:

First, just because data is publicly-accessible does not mean that a map of said data is ethical or harmless. Second, there are dozens of ways to visualize and “blur” sensitive data on a map. Third, a threat and risk mitigation strategy should be standard operating procedure for crisis maps. Fourth, since crisis mapping almost always entails risk-taking when tracking conflicts, the benefits that at-risk communities gain from the resulting map must always and clearly outweigh the expected costs. This means carrying out a Cost Benefit Analysis, which goes to the heart of the “Do No Harm” principle. Fifth, a code of conduct on data protection and data security for digital humanitarian response needs to be drafted, adopted and self-enforced; something I’m actively working on with both the International Committee of the Red Cross (ICRC) and GSMA’s  Disaster Response Program. Sixth, the importance of privacy can—and already has—been hijacked by attention-seeking hypocrites who sensationalize the issue to gain notoriety and paralyze action. Non-action in no way implies no-harm.

Update: Turns out the gan ownership data was highly inaccurate!

7 responses to “Perils of Crisis Mapping: Lessons from Gun Map”