Large-scale events leave an unquestionable mark on social media. This was true of Hurricane Sandy, for example, and is also true of the widespread protests in Egypt this week. On Wednesday, the Egyptian Military responded to the large-scale demonstrations against President Morsi by removing him from power. Can Twitter provide early warning signals of growing political tension in Egypt and elsewhere? My QCRI colleagues Ingmar Weber & Kiran Garimella and Al-Jazeera colleague Alaa Batayneh have been closely monitoring (PDF) these upheavals via Twitter since January 2013. Specifically, they developed a Political Polarization Index that provides early warning signals for increased social tensions and violence. I will keep updating this post with new data, analysis and graphs over the next 24 hours. 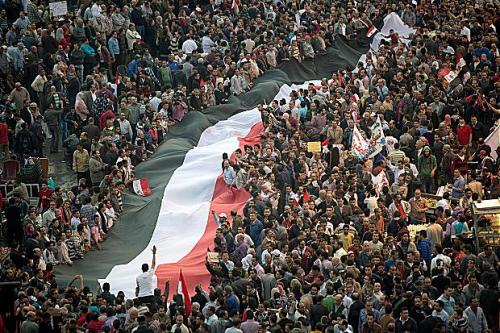 The QCRI team analyzed some 17 million Egyptian tweets posted by two types of Twitter users—Secularists and Islamists. These user lists were largely drawn from this previous research and only include users that provide geographical information in their Twitter profiles. For each of these 7,000+ “seed users”, QCRI researchers downloaded their most recent 3,200 tweets along with a set of 200 users who retweet their posts. Note that both figures are limits imposed by the Twitter API. Ingmar, Kiran and Alaa have also analyzed users with no location information, corresponding to 65 million tweets and 20,000+ unique users. Below are word clouds of terms used in Twitter profiles created by Islamists (left) and secularists (right).

QCRI compared the hashtags used by Egyptian Islamists and secularists over a year to create an insightful Political Polarization Index. The methodology used to create this index is described in more detail in this post’s epilogue. The graph below displays the overall hashtag polarity over time along with the number of distinct hashtags used per time interval. As you’ll note, the graph includes the very latest data published today. Click on the graph to enlarge.

The spike in political polarization towards the end of 2011 appears to coincide with “the political struggle over the constitution and a planned referendum on the topic.” The annotations in the graph refer to the following violent events:

A – Assailants with rocks and firebombs gather outside Ministry of Defense to call for an end to military rule.

B – Demonstrations break out after President Morsi grants himself increased power to protect the nation. Clashes take place between protestors and Muslim Brotherhood supporters.

E – Demonstrations in Tahrir square, Port Said and all across the country.

H,I – Massive demonstrations in Tahrir and removal of President Morsi.

In sum, the graph confirms that the political polarization hashtag can serve as a barometer for social tensions and perhaps even early warnings of violence. “Quite strikingly, all outbreaks of violence happened during periods where the hashtag polarity was comparatively high.” This also true for the events of the past week, as evidenced by QCRI’s political polarization dashboard below. Click on the figure to enlarge. Note that I used Chrome’s translate feature to convert hashtags from Arabic to English. The original screenshot in Arabic is available here (PNG). 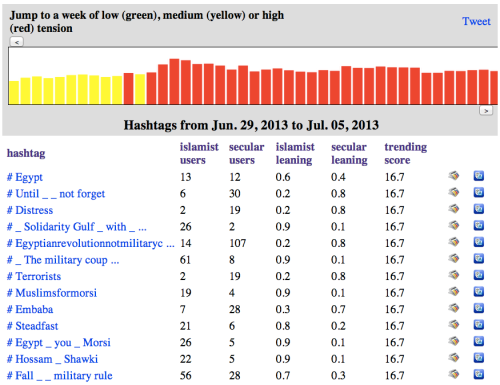 Each bar above corresponds to a week of Twitter data analysis. When bars were initially green and yellow during the beginnings of Morsi’s Presidency (scroll left on the dashboard for the earlier dates). The change to red (heightened political polarization) coincides with increased tensions around the constitutional crisis in late November, early December. See this timeline for more information. The “Tending Score” in the table above combines volume with recency. A high trending score means the hashtag is more relevant to the current week.

The two graphs below display political polarization over time. The first starts from January 1, 2013 while the second from June 1, 2013. Interestingly, February 14th sees a dramatic drop in polarization. We’re not sure if this is a bug in the analysis or whether a significant event (Valentine’s?) can explain this very low level of political polarization on February 14th. We see another major drop on May 10th. Any Egypt experts know why that might be?

The political polarization graph below reveals a steady increase from June 1st through to last week’s massive protests and removal of President Morsi. 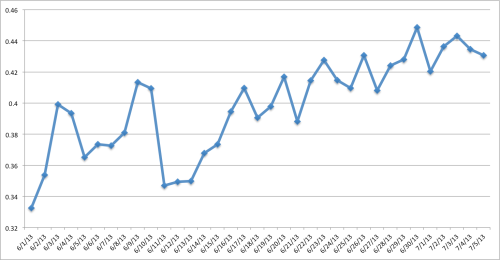 To conclude, large-scale political events such as widespread political protests and a subsequent regime change in Egypt continue to leave a clear mark on social media activity. This pulse can be captured using a Political Polarization Index based on the hashtags used by Islamists and secularists on Twitter. Furthermore, this index appears to provide early warning signals of increasing tension. As my QCRI colleagues note, “there might be forecast potential and we plan to explore this further in the future.”

Acknowledgements: Many thanks to Ingmar and Kiran for their valuable input and feedback in the drafting of this blog post.

Methods: (written by Ingmar): The political polarization index was computed as follows. The analysis starts by identifying a set of Twitter users who are likely to support either Islamists or secularists in Egypt. This is done by monitoring retweets posted by a set of seed users. For example, users who frequently retweet Muhammad Morsi  and never retweeting El Baradei would be considered Islamist supporters. (This same approach was used by Michael Conover and colleagues to study US politics).

Once politically engaged and polarized users are identified, their use of hashtags is monitored over time. A “neutral” hashtags such as #fb or #ff is typically used by both camps in Egypt in roughly equal proportions and would hence be assigned a 50-50 Islamist-secular leaning. But certain hashtags reveal much more pronounced polarization. For example, the hashtag #tamarrod is assigned a 0-100 Islamist-secular score. Tamarrod refers to the “Rebel” movement, the leading grassroots movement behind the protests that led to Morsi’s ousting.

Similarly the hashtag #muslimsformorsi is assigned a 90-10 Islamist-secular score, which makes sense as it is clearly in support of Morsi. This kind of numerical analysis is done on a weekly basis. Hashtags with a 50-50 score in a given week have zero “tension” whereas hashtags with either 100-0 or 0-100 have maximal tension. The average tension value across all hashtags used in a given week is then plotted over time. Interestingly, this value, derived from hashtag usage in a language-agnostic manner, seems to coincide with outbreaks of violence on the ground as shown in bar chart above.

5 responses to “Using Twitter to Analyze Secular vs. Islamist Polarization in Egypt (Updated)”