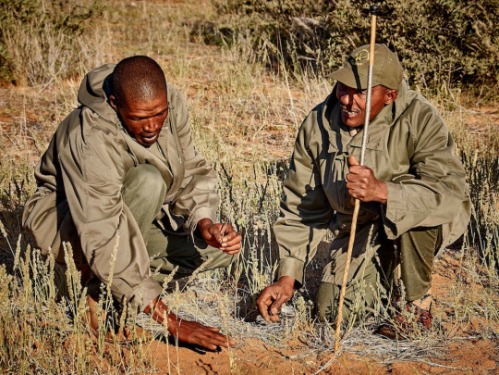 The San people are bushmen who span multiple countries in Southern Africa. “For millennia, they have lived as hunter-gatherers in the Kalahari desert relying on an intimate knowledge of the environment.” Thus begins Sonja’s story, written with Matthew Parkan. Friend and colleague Sonja Betschart is a fellow co-founder at WeRobotics. In 2015, she teamed up on with partners in Namibia to support their wildlife conservation efforts. Sonja and team used aerial robots (UAVs) to count the number of wild animals in Kuzikus Wildlife Reserve. All the images in this blog post are credited to Drone Adventures.

If that name sounds familiar, it’s because of this digital crowdsourcing project, which I spearheaded with the same Wildlife Reserve back in 2014. The project, which was covered on CNN, used crowdsourcing to identify wild animals in very high-resolution aerial imagery. As Sonja notes, having updated counts for the number of animals in each species is instrumental to nature conservation efforts.

While the crowdsourcing project worked rather well to identify the presence of animals, distinguishing between animals is more difficult for “the crowd” even when crowdsourcing is combined with Artificial Intelligence. Local indigenous knowledge is unbeatable, or is it? They decided to put this indigenous technical knowledge to the test: find the baby rhino that had been spotted in the area earlier during the mission. Armed with the latest aerial robotics technology, Sonja and team knew full well that the robots would be stiff—even unfair—competition for the bushmen. After all, the aerial robots could travel much faster and much farther than the fastest bushman in Namibia.

Game on: Bushmen vs Robots. Ready, get set, go!

The drones weren’t even up in the air when the bushmen strolled back into camp to make themselves a cup up tea. Yes, they had already identified the location of the rhino. “This technologically humbling experience was a real eye opener,” writes Sonja, “a clear demonstration of how valuable traditional skills are despite new technologies. It was also one of the reasons why we started thinking about ways to involve the trackers in our work.”

They invited the bushmen to analyze the thousands of aerial images taken by the aerial robots to identity the various animal species visible in each image. After providing the San with a crash course on how to use a computer (to navigate between images), the bushmen “provided us with consistent interpretations of the species and sometimes even of the tracks in the high grass. However, what impressed us most was that the San pointed out subtle differences in the shadows [of the animals] that would give away the animals’ identities […].”

Take this aerial image, for example. See anything? “The San identified three different species on this image: oryx (red circles), blesbok (blue circle) and zebra (green circle).” In another image, “the bushmen were even able to give us the name of one of the Black Rhinos they spotted! For people who had never seen aerial imagery, their performance was truly remarkable.” Clearly, “with a bit of additional training, the San trackers could easily become expert image analysts.”

As Sonja rightly concluded after the mission, the project in Namibia was yet more evidence that combining indigenous knowledge with modern technology is both an elegant way of keeping this knowledge alive and an effective approach to address some of our technical and scientific limitations. As such, this is precisely the kind of project that Sonja and I want to see WeRobotics launch in 2016. It is fully in line with our mission to democratize the Fourth Industrial Revolution.

“The Namibia mission was part of SAVMAP, a joint initiative between the Laboratory of Geographic Information Systems (LASIG) of EPFL, Kuzikus Wildlife Reserve & Drone Adventures that aims at better integrating geospatial technologies with conservation and wildlife management in the Kalahari.”

4 responses to “When Bushmen Race Aerial Robots to Protect Wildlife”