How Drone Natives are Decolonizing Robotics

In 2015, Cyclone Pam devastated the islands of Vanuatu in the South Pacific. In response to the Category 5 Cyclone, I was asked by the World Bank to coordinate a humanitarian drone mission to speed up the damage assessments. But I couldn’t find any local drone pilots at the time, so had to recruit two foreign drone companies from Australia and New Zealand instead. Their drone pilots did a great job under challenging conditions over the course of several weeks. I continue to be in touch with them and continue to learn from them. They’re top notch professionals.

Fast forward to 2018. The South Pacific has been battered by an onslaught of major cyclones, no fewer than 4 in almost as many months. Unlike 2015, one local drone pilot deployed to the affected areas to support the relief efforts. Her name is Amrita Lal (pictured below) and she serves as the Coordinator of South Pacific Flying Labs based in Fiji. In deploying with the Red Cross following Cyclone Keni, Amrita became the first local drone pilot to deploy with a National Red Cross Society in the region.

Our mission at WeRobotics is to localize opportunity. We create local opportunities to participate in problem solving, to take the lead in problem solving, to be a real part of the solution, to have meaningful and sustainable impact. By localizing expertise in robotics, we create new opportunities to scale humanitarian aid, sustainable development, public health or nature conservation efforts locally. In so doing, we create local opportunities for professional development and upward mobility. How do we create and sustain these new opportunities? By localizing emerging technologies through our Flying Labs. (We like to call them Wakanda Flying Labs). 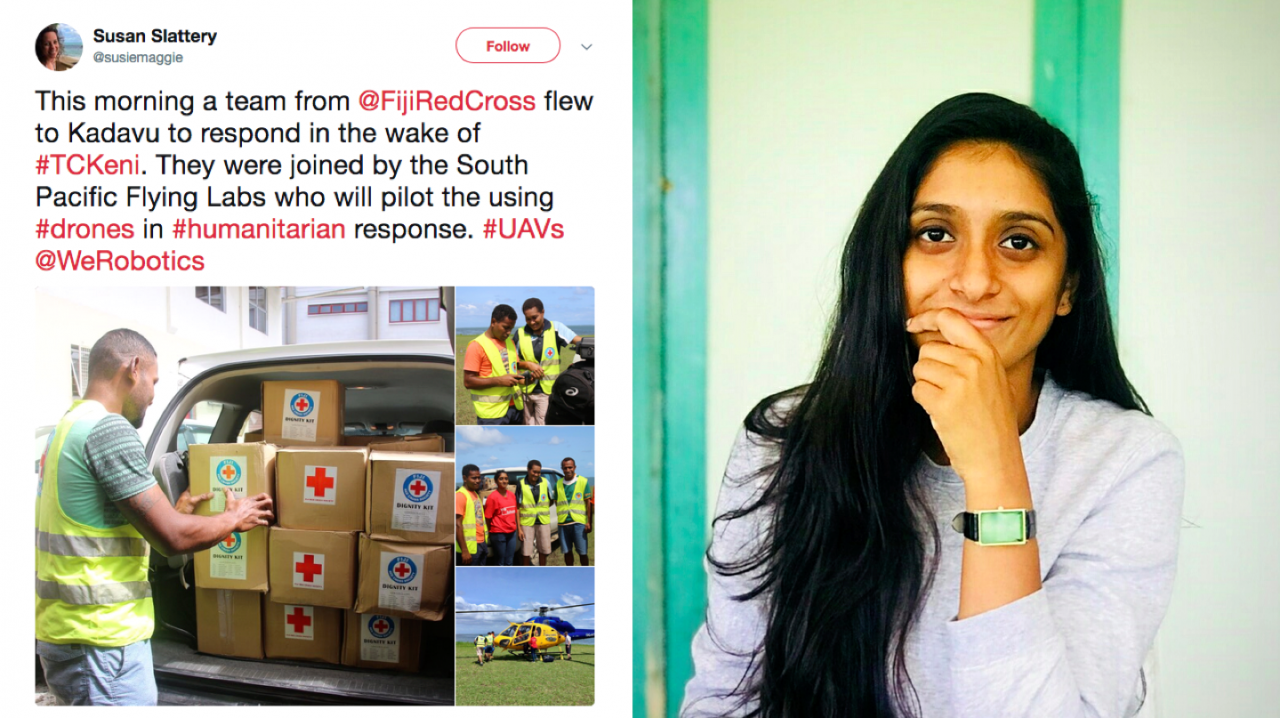 Demand for the skills that Amrita and her Flying Labs have is growing. This is the “Fourth Industrial Revolution” (4IR) after all: the rise of Robotics and Artificial Intelligence is reshaping the global labor market, shutting down some job opportunities entirely while creating new ones. This is a disruptive time in human history. And we know from previous industrial revolutions that they create divides between the “have’s” and “have nots”; between the included and the excluded; between those who have access to new opportunities and those who don’t. The First Industrial revolution was powered by the steam engine along with the iron and textile industries. The second was powered by steel, oil and electricity. Digital technologies unleashed the Third Industrial Revolution. Each these revolutions created new opportunities for some (usually in high-income countries), and obliterated existing opportunities for others (usually in low-income countries).

The Digital Divide of the Third Industrial Revolution has created profound inequalities, and the Robotics Divide of the 4IR is already exacerbating these inequalities. (What’s that? You don’t have 3G in your village? Oh. Well sorry, we can’t fly our medical delivery drones to your village without 3G. Can we have our umbrella back?). As my new colleague from Cameroon, Marco Enoh, recently tweeted,

The Fourth Industrial Revolution is creating new jobs in lower-income countries. But these jobs are almost always taken by foreign companies from higher-income countries. Why? Either because the local talent doesn’t exist, or because said local talent is not visible or connected to these new job opportunities. Our Flying Labs serve to overcome these unjust hurdles. Fact is, foreign companies are more expensive to hire. Foreign drone pilots need more time to deploy. They need international flights and hotels. They often don’t know the countries that they’re sent to and rarely know the local languages or customs. This creates an exciting business opportunity for Amrita and Marco, and their colleagues at other Flying Labs in Africa, Asia and Latin America. 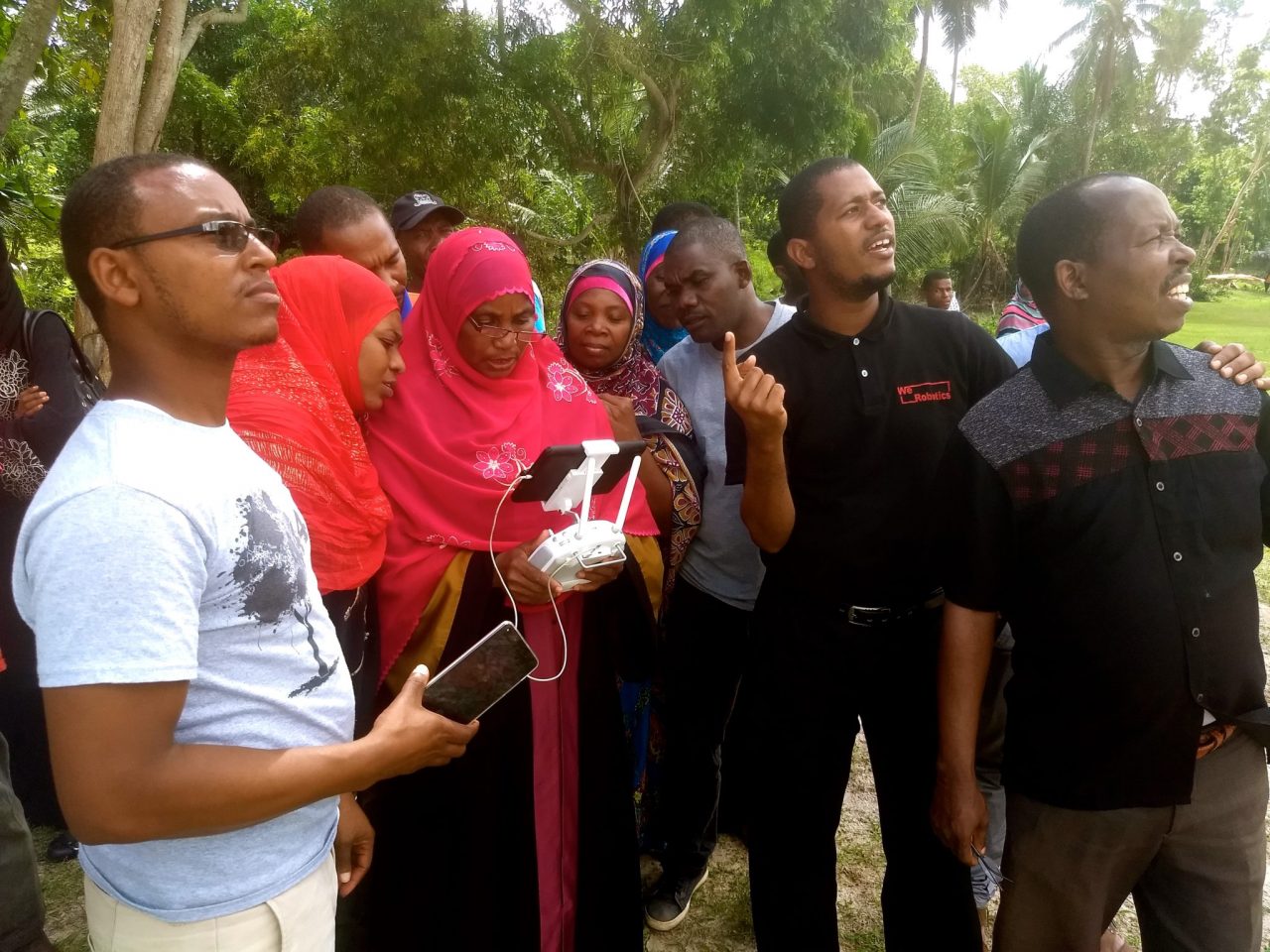 Robotics enables new business opportunities because robots enable an entirely new form of mobility—autonomous mobility. Autonomous mobility in the air (flying drones), in the oceans (swimming drones) and on land (driving drones). Mobility gives freedom, which creates new opportunities (think of the automotive revolution). This explains why we are committed to helping our Flying Labs and their partners use autonomous robotics to overcome the challenge of mobility in humanitarian aid, sustainable development, nature conservation and public health. We’ve borrowed some of this language from our new friends at World Bicycle Relief because their approach is similar to ours: It isn’t about the technology—bicycle or drone—it’s about localizing this technology sustainably and respectfully to create new opportunities.

Amrita was presented with an important opportunity to become the first local, female drone pilot in her region to deploy with a National Red Cross Society. She grabbed it and ran with it. This experience has opened up new opportunities for her and her Flying Labs team in the Pacific. This includes incubating a new hub of Pacific Flying Labs in Vanuatu in coming months. So the next time Vanuatu has to deal with a major tropical cyclone or other consequences of climate change, the World Bank must not hire me or hire any foreign drone pilots to accelerate their damage assessments. No, they should instead hire Amrita and her team of drone natives from Pacific Flying Labs.