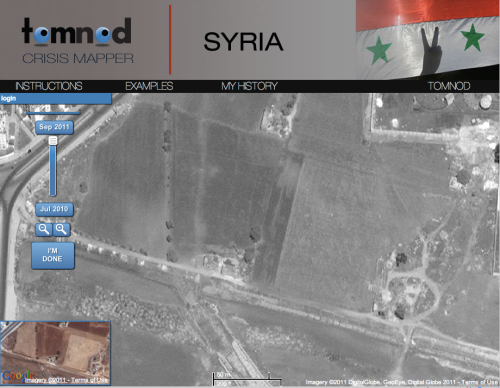 We’re focusing our efforts on the following three key cities in Syria as per the request of Amnesty International USA’s (AI-USA) Science for Human Rights Program.

For more background information on the project, please see the following links:

To recap, the purpose of this experimental pilot project is to determine whether satellite imagery analysis can be crowdsourced and triangulated to provide data that might help AI-USA corroborate numerous reports of human rights abuses they have been collecting from a multitude of other sources over the past few months. The point is to use the satellite tagging in combination with other data, not in isolation.
To this end, I’ve recommended that we take it one step further. The Syria Tracker Crowdmap has been operations for months. Why not launch an Ushahidiplatform that combines the triangulated features from the crowdsourced satellite imagery analysis with crowdsourced crisis reports from multiple sources? 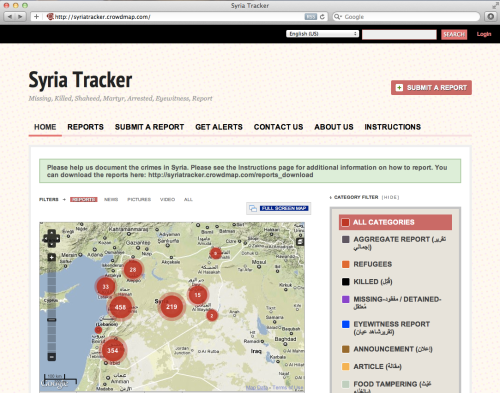 The satellite imagery analyzed by the SBTF was taken in early September. We could grab the August and September crisis data from Syria Tracker and turn the satellite imagery analysis data into layers. For example, the “Military tag” which includes large military equipment like tanks and artillery could be uploaded to Ushahidi as a KML file. This would allow AI-USA and others to cross-reference their own reports, with those on Syria Tracker and then also place that analysis into context vis-a-vis the location of military equipment, large crowds and check-points over the same time period.

The advantage of adding these layers to an Ushahidi platform is that they could be updated and compared over time. For example, we could compare the location of Syrian tanks versus on-the-ground reports of shelling for the month of August, September, October, etc. Perhaps we could even track the repositioning of  some military equipment if we repeated this crowdsourcing initiative more frequently. Incidentally, President Eisenhower proposed this idea to the UN during the Cold War, see here.

In any case, this initiative is still very much experimental and there’s lots to learn. The SBTF Tech Team headed by Nigel McNie is looking to make the above integration happen, which I’m super excited about. I’d love to see closer integration with satellite imagery analysis data in future Ushahidi deployments that crowdsource crisis reporting from the field. Incidentally, we could scale this feature tagging approach to include hundreds if not thousands of volunteers.

In other news, my SBTF colleague Shadrock Roberts and I had a very positive conference call with UNHCR this week. The SBTF will be partnering with HCR on an official project to tag the location of informal shelters in the Afgooye corridor in the near future. Unlike our trial run from several weeks ago, we will have a far more developed and detailed rule-set & feature-key thanks to some very useful information that our colleagues at HCR have just shared with us. We’ll be adding the triangulated features from the imagery analysis to a dedicated UNHCR Ushahidi platform. We hope to run this project in October and possibly again in January so HCR can do some simple change detection using Ushahidi.

In parallel, we’re hoping to partner with the Joint Research Center (JRC), which has developed automated methods for shelter detection. Comparing crowdsourced feature tagging with an automated approach would provide yet more information to UNHCR to corroborate their assessments.