WeRobotics was recently asked by the Center for Disease Control and Prevention (CDC) to organize a training on medical cargo drones in Papua New Guinea (PNG). The purpose of the training was to engage key stakeholders on the opportunities and challenges of using cargo drones in the wake of PNG’s most recent polio outbreak. An important component of the training was a hands-on demo of cargo drone deliveries. There were three key reasons for making this operational demo part of the training: 1) introduce stakeholders to cargo drone technology and standard operating procedures; 2) test how quickly a cargo drone team could be deployed; 3) test how quickly flight permissions could be secured from PNG’s Civil Aviation Safety Authority (CASA). WeRobotics was given 10 weeks to implement the project. It was completed in 8 weeks.

WeRobotics partnered with two outstanding groups who ensured the project’s complete success: Soli Consultancy and Redwing Labs India. Soli Consultancy are the co-founders of PNG Flying Labs while Redwing Labs is a founding partner of India Flying Labs. Soli Consultancy has extensive experience in aviation regulations and took the lead on securing the flight permissions for the CDC project. They also took the lead on the logistics for the workshop. Redwing Labs is a cargo drone company from India that was recently selected Techstars USA, the biggest VC accelerator program in the world with an acceptance rate of less than 1%. Both Soli and Redwing went well above and beyond to ensure that the extremely tight timeline would be met. The CDC team in PNG lent invaluable support to both Soli and Redwing throughout the very busy 7 weeks leading up to the training and cargo drone flights.

Around 40 stakeholders participated in the workshop, representing an important mix of expertise from public health, aviation, and private sectors. The workshop agenda is available here (PDF). The first session comprised talks from senior health officials from PNG, Mr. Berry Ropa and Dr. Mathias Bauri from the National Department of Health. Each speaker reported on the very real difficulties in reaching remote communities in PNG. They both noted that some communities can only be reached by helicopter (costing around USD 2,500 / hour). This was followed by an open discussion between participants reflecting on related challenges and potential ways that drones might be able to address or overcome some of these challenges.

I had the pleasure of leading Session 2. The purpose of this session was to give all participants a solid background in medical cargo drones including use-cases, technologies, deployments, ethical issues, lessons learned and best practices. This 1.5 hour presentation was followed by an open discussion by all stakeholders. The session included a demo of cargo drone boxes by my good colleague Dr. Timothy Amukele and the first public announcement of the launch of PNG Flying Labs, which was very warmly welcomed by local stakeholders. Following the presentation, an open question and answer session allowed participants to move the conversations forward vis-à-vis the PNG context.

Session three was a design-thinking session with a total of 5 breakout groups. Each group was asked to identify specific health projects that they believed could benefit from the use of drones. This meant identify the key health need, where geographically this need was greatest and which stakeholders would be best placed to implement the use of cargo drone deliveries in that context. Participants were then asked to select the one project they considered most compelling for immediate implementation. The results were particularly informative and some detailed enough to develop an initial concept note and proposal for.

In the fourth session, I provided an overview of business models, cost structures, sustainability strategies, and different methodologies to assess the cost-benefit of introducing cargo drone deliveries in a given context. This 45-minute presentation was followed by another open discussion during which participants connected the ideas presented to the PNG context. The fifth and final session was run by Redwing and served as an introduction to drone regulations, safety, standard operating procedures, fail-safe mechanisms and more.

The cargo drone demo day was scheduled for the day after the workshop at Pacific Adventist University. A backup day was set aside in case of rain. Sure enough, there where strong winds with heavy downpour that morning, so the demo day was rescheduled to the following day. Drones can certainly be made more weather proof, this is not a major technical challenge. The question has more to do with cost, since technical modifications and add-on’s necessarily require engineering resources. That said, as one local public health expert at the workshop noted, when there’s a heavy downpour like this in PNG, even 4WD cars will get stuck in muddy roads.

The original plan for the cargo drone demo was to fly from the university to Sogeri National High School through a remote mountainous terrain 17 kilometers away and with an elevation difference of some 1,000 feet. While Redwing complied with regulatory requirements for flight approvals, CASA did not approve flights Beyond Visual Line of Site (BVLOS). They informed us that an American cargo drone company had recently crashed their drone in PNG as part of a project with an international health organization. As such, CASA preferred that the Redwing flights all be conducted within Visual Line of Site, or VLOS. PNG Flying Labs and Soli Consultancy are now following-up with CASA to continue working towards an unmanned aircraft operator’s certificate.

Given that only VLOS flights were permitted, it was decided that the drone would take off from the university, fly large loops within visual line of sight and cover a distance of 17 kilometers in order to simulate the original flight plan displayed above. Vaccine vials were placed in the cargo box along with multiple icepacks and a temperature data logger. The cargo box was then fastened to the cargo drone. The total weight carried was around 680 grams. The temperature going in was around 1.5C.

The Redwing drone is a VTOL or hybrid drone, meaning that it takes off and lands vertically but then transitions to fly like plane. The advantage of hybrid drones is that they can take off and land in narrow places but still have the range of a fixed-wing drone when they transition to forward flight. The demonstration went flawlessly, with the drone covering 24 km in approximately 20 minutes. The cargo drone flew at an average speed of 75 km per hour and at an altitude of 120 meters. The temperature of the cargo was around 7.5C after landing even though there was very minimal insulation. While Redwing did both the takeoff and landings manually, they noted that both could be done autonomously as well regardless of the cargo weight. 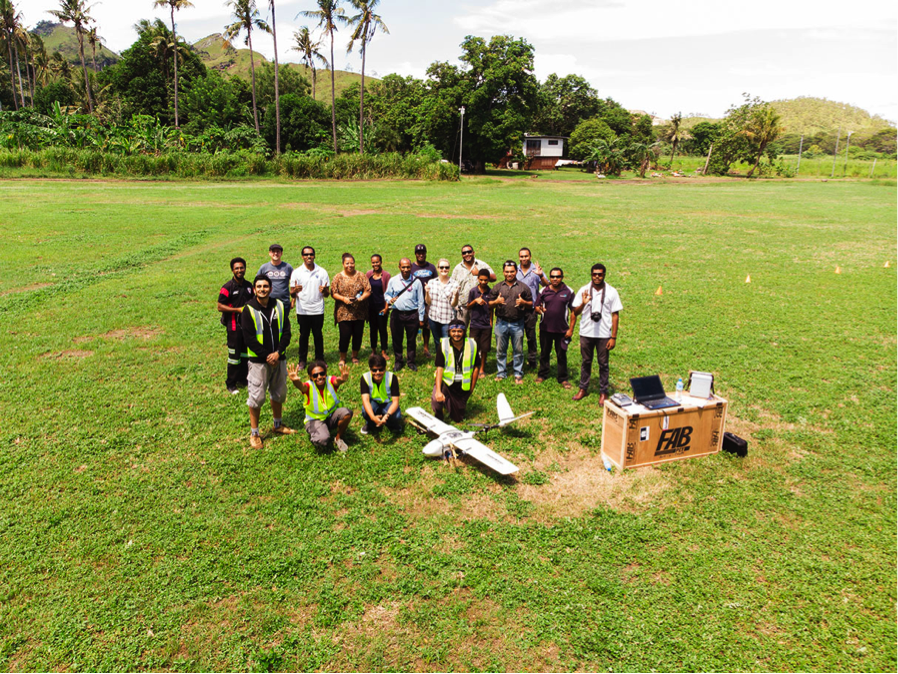 Sincerest thanks to the following organizations for their partnership and trust: CDC, Gates Foundation, Soli Consulting, Redwing Labs and CASA. We’re very pleased to have launched Papua New Guinea Flying Labs, which is part of the growing South Pacific Flying Labs network. PNG Flying Labs will be introduced more formally in coming weeks and we expect Vanuatu Flying Labs to join the South Pacific Network in the very near future.

WeRobotics is also exploring a number of other medical cargo drone projects in Nepal, Democratic Republic of the Congo (DRC), Cameroon, Uganda and the Dominican Republic. We’ll be sure to share our lessons learned and best practices for those projects that do move forward. So stay tuned for more updates throughout 2019. In the meantime, learn how South Pacific Flying Labs is using cargo drones to help reduce Dengue fever in Fiji, and how Peru Flying Labs and Dominican Republic Flying Labs are using cargo drones for other public health use cases. Also, be sure to sign up for our upcoming online course on Medical Cargo Drones in Public Health.