Analyzing the Veracity of Tweets during a Major Crisis

A research team at Yahoo recently completed an empirical study (PDF) on the behavior of Twitter users after the 8.8 magnitude earthquake in Chile. The study was based on 4,727,524 indexed tweets, about 20% of which were replies to other tweets. What is particularly interesting about this study is that the team also analyzed the spread of false rumors and confirmed news that were disseminated on Twitter.

The authors “manually selected some relevant cases of valid news items, which were confirmed at some point by reliable sources.” In addition, they “manually selected important cases of baseless rumors which emerged during the crisis (confirmed to be false at some point).” Their goal was to determine whether users interacted differently when faced with valid news vs false rumors.

The study shows that about 95% of tweets related to confirmed reports validated that information. In contrast only 0.03% of tweets denied the validity of these true cases. Interestingly, the results also show  that “the number of tweets that deny information becomes much larger when the information corresponds to a false rumor.” In fact, about 50% of tweets will deny the validity of false reports. The table below lists the full results. 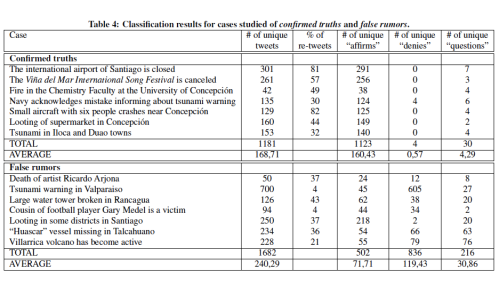 The authors conclude that “the propagation of tweets that correspond to rumors differs from tweets that spread news because rumors tend to be questioned more than news by the Twitter community. Notice that this fact suggests that the Twitter community works like a collaborative filter of information. This result suggests also a very promising research line: it could posible to detect rumors by using aggregate analysis on tweets.”

I think these findings are particularly important for projects like *Swift River, which try to validate crowdsourced crisis information in real-time. I would also be interested to see a similar study on tweets around the Haitian earthquake to explore whether this “collaborative filter” dynamic is an emergent phenomena in this complex systems or simply an artifact of something else.

Interested in learning more about “information forensics”? See this link and the articles below: