Truthiness as Probability: Moving Beyond the True or False Dichotomy when Verifying Social Media

I asked the following question at the Berkman Center’s recent Symposium on Truthiness in Digital Media: “Should we think of truthiness in terms of probabili-ties rather than use a True or False dichotomy?” The wording here is important. The word “truthiness” already suggests a subjective fuzziness around the term. Expressing truthiness as probabilities provides more contextual information than does a binary true or false answer. 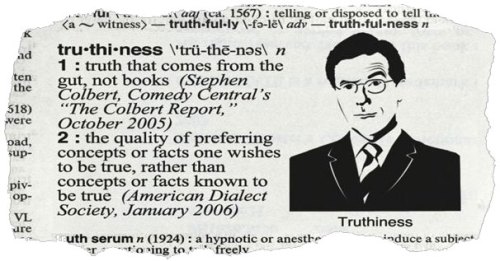 When we set out to design the SwiftRiver platform some three years ago, it was already clear to me then that the veracity of crowdsourced information ought to be scored in terms of probabilities. For example, what is the probability that the content of a Tweet referring to the Russian elections is actually true? Why use probabilities? Because it is particularly challenging to instantaneously verify crowdsourced information in the real-time social media world we live in.

There is a common tendency to assume that all unverified information is false until proven otherwise. This is too simplistic, however. We need a fuzzy logic approach to truthiness:

“In contrast with traditional logic theory, where binary sets have two-valued logic: true or false, fuzzy logic variables may have a truth value that ranges in degree between 0 and 1. Fuzzy logic has been extended to handle the concept of partial truth, where the truth value may range between completely true and completely false.”

The majority of user-generated content is unverified at time of birth. (Does said data deserve the “original sin” of being labeled as false, unworthy, until prove otherwise? To digress further, unverified content could be said to have a distinct wave function that enables said data to be both true and false until observed. The act of observation starts the collapse of said wave function. To the astute observer, yes, I’m riffing off Shroedinger’s Cat, and was also pondering how to weave in Heisenberg’s uncertainty principle as an analogy; think of a piece of information characterized by a “probability cloud” of truthiness).

In any case, instead of dismissing content generated in real-time because it is not immediately verifiable, we can draw on Information Forensics to begin assessing the potential validity of said content. Tactics from information forensics can help us create a score card of heuristics to express truthiness in terms of probabilities. (I call this advanced media literacy). There are indeed several factors that one can weigh, e.g., the identity of the messenger relaying the content, the source of the content, the wording of said content, the time of day the information was shared, the geographical proximity of the source to the event being reported, etc.

These weights need not be static as they are largely subjective and temporal; after all, truth is socially constructed and dynamic. So while a “wisdom of the crowds” approach alone may not always be well-suited to generating these weights, perhaps integrating the hunch of the expert coupled with machine learning algorithms (based on lessons learned in information forensics) could result more useful decision-support tools for truthiness forecasting (or rather “backcasting”).

In sum, thinking of truthiness strictly in terms of true and false prevents us from “complexifying” a scalar variable into a vector (a wave function), which in turn limits our ability to develop new intervention strategies. We need new conceptual frameworks to reflect the complexity and ambiguity of user-generated content: