Update: Jon Thompson had initially mistakenly blogged that all roads/cities in Georgia had “disappeared” from Google Maps and Google Earth. A colleague of mine at Google has since informed me that they never had a roads layer for Georgia. According to this same contact, Google has just released this formal statement:

It is untrue to suggest, as some media reports have, that Google has removed data or imagery from our Google Maps product in Georgia, Armenia or Azerbaijan.  We have never had local data for those countries and that is why local details such as landmarks and cities do not appear.

An initial crisis map of the escalating violence between Georgia and Russia has been created for Google Earth. While dynamic maps add more value than static maps, we need a more interactive interface that permits for crowdsourcing crisis information in quasi-real time with fully geo-referenced information. 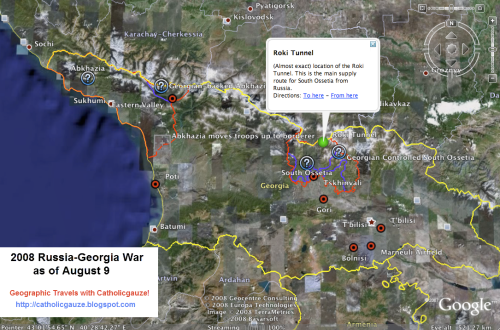 Here I am thinking of Ushahidi and the Humanitarian Sensor Web (HSW). Humanitarian organizations have already moved into the disputed region and have no doubt learned important information, which is likely changing every hour. But the one person behind these initial Google Earth maps may not have easy access to organizations on the ground.

This is precisely when we need a crisis mapping platform that enables field-based organizations and local communities to text in important information on events as they unfold. As more information surfaces, we’ll need that same platform to provide quantitative, time-stamped analysis within the same interface. Finally, we would want to let affected communities know how to receive or subscribe to this information as it is posted and validated. This is where Dial-Up-Radio could come in handy.