I joined the Peace Research Institute, Oslo (PRIO) as a researcher in 2006 to do some data development work on a conflict dataset and to work with Norways’ former Secretary of State on assessing the impact of armed conflict on women’s health for the Ministry of Foreign Affairs (MFA).

I quickly became interested in a related PRIO project that had recently begun called the “Armed Conflict and Location Event Dataset, or ACLED. Having worked with conflict event-datasets as part of operational conflict early warning systems in the Horn, I immediately took interest in the project.

While I have referred to ACLED in a number of previous blog posts, two of my main criticisms (until recently) were (1) the lack of data on recent conflicts; and (2) the lack of an interactive interface for geospatial analysis, or at least more compelling visualization platform.

Independently, I came across UniveralMind back November of last year when Andrew Turner at GeoCommons made a reference to the group’s work in his presentation at an Ushahidi meeting. I featured one of the group’s products, SpatialKey, in my recent video primer on crisis mapping.

As it turns out, ACLED is now using SpatialKey to visualize and analyze some of it’s data. So the team has definitely come a long way from using ArcGIS and Google Earth, which is great. The screenshot below, for example, depicts the ACLED data on Kenya’s post-election violence using SpatialKey.

If the Kenya data is not drawn from the Ushahidi then this could be an exciting research opportunity to compare both datasets using visual analysis and applied geo-statistics. I write “if” because PRIO somewhat surprisingly has not made the Kenya data available. They are usually very transparent so I will follow up with them and hope to get the data. Anyone interested in co-authoring this study?

Academics Get up To Speed

It’s great to see ACLED developing conflict data for more recent conflicts. Data on Chad, Sudan and the Central African Republic (CAR) is also depicted using SpatialKey but again the underlying spreadsheet data does not appear to be available regrettably. If the data were public, then the UN’s Threat and Risk Mapping Analysis (TRMA) project may very well have much to gain from using the data operationally. 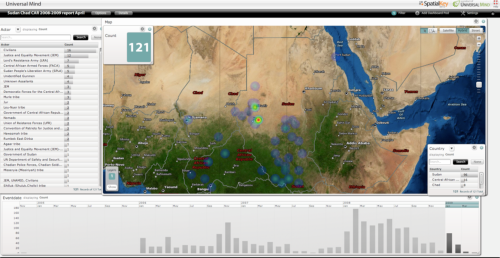 I’ll close with just one—perhaps unwarranted—concern since I still haven’t heard back from ACLED about accessing their data. As academics become increasingly interested in applying geospatial analysis to recent or even current conflicts by developing their own datasets (a very positive move for sure), will these academics however keep their data to themselves until they’ve published an article in a peer-reviewed journal, which can often take up to a year or more to publish?

To this end I share the concern that my colleague Ed Jezierski from InSTEDD articulated in his excellent blog post yesterday: “Academic projects that collect data with preference towards information that will help to publish a paper rather than the information that will be the most actionable or help community health the most.” Worst still, however, would be academics collecting data very relevant to the humanitarian or human rights community and not sharing that data until their academic papers are officially published.

I don’t think there needs to be competition between scholars and like-minded practitioners. There are increasingly more scholar-practitioners who recognize that they can contributed their research and skills to the benefit of the humanitarian and human rights communities. At the same time, the currency of academia remains the number of peer-reviewed publications. But humanitarian practitioners can simply sign an agreement such that anyone using the data for humanitarian purposes cannot publish any analysis of said data in a peer-reviewed forum.