My colleague Adam White from GroupShot just shared an interesting location analysis study of the recent London riots. The study was carried out by the group Space Syntax and is available here (PDF). The purpose of the study was to test whether the overly complex spatial layout of large post-war housing estates has “an effect on social patterns, often leading to social malaise and anti-social behavior.” While the study’s methods are interesting, I’m concerned about some of the underlying socio-economic assumptions that buttress the analysis.

According to the study, 84% of verified incidents in north London and 96% in south London took place within a five minute walk—400 meters—of both: 1) An established town centre, and 2) a large post-war housing estate. Meanwhile, local centres without large post-war estates nearby were unaffected. 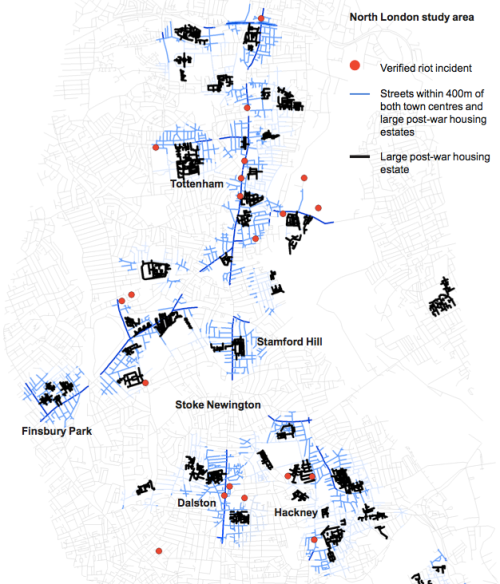 The study makes some interesting assumptions, e.g., “most post-war housing estates have been designed in such a way that they create over-complex, and as a result, under-used spaces. These spaces are populated by large groups of unsupervised children and teenagers, where peer socialisation can occur between them without the influence of adults. This pattern of activity, and the segregation of user groups, is not found in non-estate street networks. Our analysis of court records shows that the majority of convicted rioters in the study areas live on large post-war housing estates.”

The reason I’m uncomfortable with the above has to do with the implied solution, i.e., simplify the complex spaces and bring more social traffic to under-utilized areas. This will ensure that children and teenagers are more supervised and prevent peer socialization from taking place without the influence of adults. In other words, simply replace the “hardware” so the “social software” won’t have any more bugs. Snap, if only Mubarak could have hacked Tahrir Square before the revolution. Sarcasm aside, there were some real and legitimate grievances that motivated some of the protestors in England (and Egypt), which this study doesn’t address.

The next version of the analysis is supposed to include socio-economic data to understand the relationship between deprivation and rioting, which in my mind should have come first. But better late than never. In the meantime, here is a post on the tactical use of technology for nonviolent protests with a reference to London: “Maps, Activism and Technology: Check-In’s with a Purpose.”