Tweeting is Believing? Analyzing Perceptions of Credibility on Twitter

What factors influence whether or not a tweet is perceived as credible? According to this recent study, users have “difficulty discerning truthfulness based on con-tent alone, with message topic, user name, and user image all impacting judg-ments of tweets and authors to varying degrees regardless of the actual truth-fulness of the item.”

For example, “Features associated with low credibility perceptions were the use of non-standard grammar and punctuation, not replacing the default account image, or using a cartoon or avatar as an account image. Following a large number of users was also associated with lower author credibility, especially when unbalanced in comparison to follower count […].” As for features enhan-cing a tweet’s credibility, these included “author influence (as measured by follower, retweet, and  mention counts), topical expertise (as established through a Twitter homepage bio, history of on-topic tweeting, pages outside of Twitter, or having a location relevant to the topic of the tweet), and reputation (whether an author is someone a user follows, has heard of, or who has an official Twitter account verification seal). Content related features viewed as credibility-enhancing were containing a URL leading to a high-quality site, and the existence of other tweets conveying similar information.”

In general, users’ ability to “judge credibility in practice is largely limited to those features visible at-a-glance in current UIs (user picture, user name, and tweet content). Conversely, features that often are obscured in the user interface, such as the bio of a user, receive little attention despite their ability to impact cred-ibility judgments.” The table below compares a features’s perceived credibility impact with the attention actually allotted to assessing that feature. 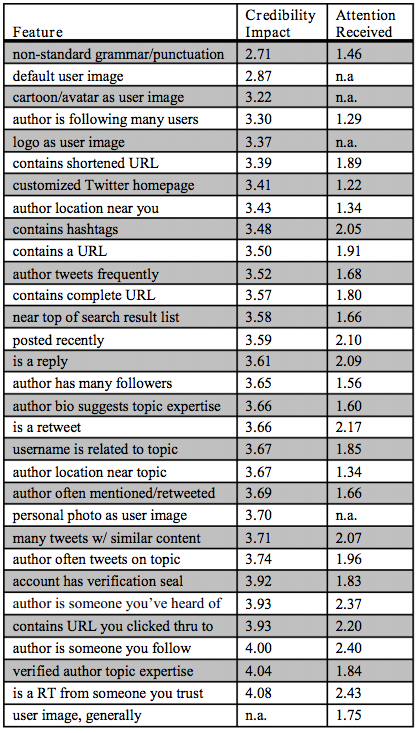 “Message topic influenced perceptions of tweet credibility, with science tweets receiving a higher mean tweet credibility rating than those about either politics  or entertainment. Message topic had no statistically significant impact on perceptions of author credibility.” In terms of usernames, “Authors with topical names were considered more credible than those with traditional user names, who were in turn considered more credible than those with internet name styles.” In a follow up experiment, the study analyzed perceptions of credibility vis-a-vis a user’s image, i.e., the profile picture associated with a given Twitter account. “Use of the default Twitter icon significantly lowers ratings of content and marginally lowers ratings of authors […]” in comparison to generic, topical, female and male images.

Obviously, “many of these metrics can be faked to varying extents. Selecting a topical username is trivial for a spam account. Manufacturing a high follower to following ratio or a high number of retweets is more difficult but not impossible. User interface changes that highlight harder to fake factors, such as showing any available relationship between a user’s network and the content in question, should help.” Overall, these results “indicate a discrepancy between features people rate as relevant to determining credibility and those that mainstream social search engines make available.” The authors of the study conclude by suggesting changes in interface design that will enhance a user’s ability to make credibility judgements.

“Firstly, author credentials should be accessible at a glance, since these add value and users rarely take the time to click through to them. Ideally this will include metrics that convey consistency (number of tweets on topic) and legitimization by other users (number of mentions or retweets), as well as details from the author’s Twitter page (bio, location, follower/following counts). Second, for con-tent assessment, metrics on number of retweets or number of times a link has been shared, along with who is retweeting and sharing, will provide consumers with context for assessing credibility. […] seeing clusters of tweets that conveyed similar messages was reassuring to users; displaying such similar clusters runs counter to the current tendency for search engines to strive for high recall by showing a diverse array of retrieved items rather than many similar ones–exploring how to resolve this tension is an interesting area for future work.”

5 responses to “Tweeting is Believing? Analyzing Perceptions of Credibility on Twitter”