From Russia with Love: A Match.com for Disaster Response

I’ve been advocating for the development of a “Match.com” for disaster response since early 2010. Such a platform would serve to quickly match hyperlocal needs with relevant resources available at the local and national level, thus facilitating and accelerating self-organization following major disasters. Why advocate for a platform modeled after an online dating website? Because self-organized mutual-aid is an important driver of community resilience.

Obviously, self-organization is not dependent on digital technology. The word Rynda, for example, is an old Russian word for a “village bell” which was used by local communities to self-organize during emergencies. Interestingly, Rynda became a popular meme on social media during fires in 2010. As my colleague Gregory Asmolov notes in his brilliant new study, a Russian blogger at the time of the fires “posted an emotional open letter to Prime Minister Putin, describing the lack of action by local authorities and emergency services.” In effect, the blogger demanded a “return to an old tradition of self-organization in local communities,” subsequently exclaiming “bring back the Rynda!” This demand grew into a popular meme symbolizing the catastrophic failure of the formal system’s response to the massive fires. 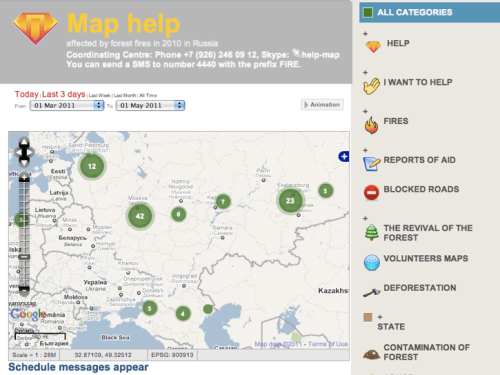 At the time, my colleagues Gregory, Alexey Sidorenko & Glafira Parinos launched the Help Map above in an effort to facilitate self-organization and mutual aid. But as Gregory notes in his new study, “The more people were willing to help, the more difficult it was to coordinate the assistance and to match resources with needs.” Moreover, the Help Map continued to receive reports on needs and offers-of-help after the fires had subsided. To be sure, reports of flooding soon found their way to the map, for example. Gregory, Alexey, Glarifa and team thus launched “Virtual Rynda: The Help Atlas” to facilitate self-help in response to a variety of situations beyond sudden-onset crises.

“We believed that in order to develop the capacity and resilience to respond to crisis situations we would have to develop the potential for mutual aid in everyday life. This would rely on an idea that emergency and everyday-life situations were interrelated. While people’s motivation to help one another is lower during non-emergency situations, if you facilitate mutual aid in everyday life and allow people to acquire skills in using Internet-based technologies to help one another or in asking for assistance, this will help to create an improved capacity to fulfill the potential of mutual aid the next time a disaster happens. […] The idea was that ICTs could expand the range within which the tolling of the emergency bell could be heard. Everyone could ‘ring’ the ‘Virtual Rynda’ when they needed help, and communication networks would magnify the sound until it reached those who could come and help.”

In order to accelerate and scale the matching of needs & resources, Gregory and team (pictured below) sought to develop a matchmaking algorithm. Rynda would ask users to specify what the need was, where (geographically) the need was located and when (time-wise) the need was requested. “On the basis of this data, computer-based algorithms & human moderators could match offers with requests and optimize the process of resource allocation.” Rynda also included personal profiles, enabling volunteers “to develop an online reputation and increase trust between those needing help and those who could offer assistance. Every volunteer profile included not only personal information, but also a history of the individual’s previous activities within the platform.” To this end, in addition to “Help Requests” & “Help Offers,” Rynda also included an entry for “Help Provided” to close the feedback loop.

As Gregory acknowledges, the results were mixed but certainly interesting and insightful. “Most of the messages [posted to the Rynda platform dealt] with requests for various types of social help, like clothing and medical equipment for children, homes for orphans, people with limited capabilities, or families in need. […]. Some requests from environmental NGOs were related to the mobilization of volunteers to fight against deforestation or to fight wildfires. […]. In another case, a volunteer who responded to a request on the platform helped to transport resources to a family with many children living far from a big city. […]. Many requests concern[ed] children or disabled people. In one case, Rynda found a volunteer who helped a young woman leave her flat for walks, something she could not do alone. In some cases, the platform helped to provide medicine.” In any event, an analysis of the needs posted to Rynda suggests that “the most needed resource is not the thing itself, but the capacity to take it to the person who needs it. Transportation becomes a crucial resource, especially in a country as big as Russia.”

Alas, “Despite the efforts to create a tool that would automatically match a request with a potential help provider, the capacity of the algorithm to optimize the allocation of resources was very limited.” To this end, like the Help Map initiative, digital volunteers who served as social moderators remained pivotal to the Virtual Ryndal platform. As Alexey notes, “We’ve never even got to the point of the discussion of more complex models of matching.” Perhaps Rynda should have included more structured categories to enable more automated-matching since the volunteer match-makers are simply not scalable. “Despite the intention that the ‘matchmaking’ algorithm would support the efficient allocation of resources between those in need and those who could help, the success of the ‘matchmaking’ depended on the work of the moderators, whose resources were limited. As a result, a gap emerged between the broad issues that the project could address and the limited resources of volunteers.”

To this end, Gregory readily admits that “the initial definition of the project as a general mutual aid platform may have been too broad and unspecific.” I agree with this diagnostic. Take the online dating platform Match.com for example. Match.com’s sole focus is online dating; Airbnb’s sole purpose is to match those looking for a place to stay with those offering their places; Uber’s sole purpose is matching those who need to get somewhere with a local car service. To this end, matching platform for mutual-aid may indeed been too broad—at least to begin with. Amazon began with books, but later diversified.

In any case, as Gregory rightly notes, “The relatively limited success of Rynda didn’t mean the failure of the idea of mutual aid. What […] Rynda demonstrates is the variety of challenges encountered along the way of the project’s implementation.” To be sure, “Every society or community has an inherent potential mutual aid structure that can be strengthened and empowered. This is more visible in emergency situations; however, major mutual aid capacity building is needed in everyday, non-emergency situations.” Thanks to Gregory and team, future digital matchmakers can draw on the above insights and Rynda’s open source code when designing their own mutual-aid and self-help platforms.

For me, one of the key take-aways is the need for a scalable matching platform. Match.com would not be possible if the matching were done primarily manually. Nor would Match.com work as well if the company sought to match interests beyond the romantic domain. So a future Match.com for mutual-aid would need to include automated matching and begin with a very specific matching domain.

4 responses to “From Russia with Love: A Match.com for Disaster Response”