Analyzing satellite and aerial imagery to assess disaster damage is fraught with challenges. This is true for both digital humanitarians and professional imagery analysts alike. Why? Because distinguishing between infrastructure that is fully destroyed and partially damaged can be particularly challenging. Professional imagery analysts with years of experience have readily admitted that trained analysts regularly interpret the same sets of images differently. Consistency in the interpretation of satellite and aerial imagery is clearly no easy task. My colleague Joel Kaiser from Medair recently suggested another approach. 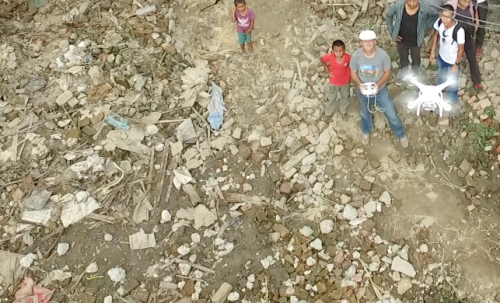 Joel and I both serve on the “Core Team” of the Humanitarian UAV Network (UAViators). It is in this context that we’ve been exploring ways to render aerial imagery more actionable for rapid disaster damage assessments and tactical decision making. To overcome some of the challenges around the consistent analysis of aerial imagery, Joel suggested we take a rank-order approach. His proposal is quite simple: display two geo-tagged aerial images side by side with the following question: “Which of the two images shows more disaster damage?” Each combination of images could be shown to multiple individuals. Images that are voted as depicting more damage would “graduate” to the next display stage and in turn be compared to each other, and so on and so forth along with those images voted as showing less damage.

In short, a dedicated algorithm would intelligently select the right combination of images to display side by side. The number and type of votes could be tabulated to compute reliability and confidence scores for the rankings. Each image would have a unique damage score which could potentially be used to identify thresholds for fully destroyed versus partially damaged versus largely intact infrastructure. Much of this could be done on MicroMappers or similar microtasking solutions. Such an approach would do away with the need for detailed imagery interpretation guides. As noted above, consistent analysis is difficult even when such guides are available. The rank-order approach could help quickly identify and map the most severely affected areas to prioritize tactical response efforts.  Note that this approach could be used with both crowd-sourced analysis and professional analysis. Note also that the GPS coordinates for each image would not be made publicly available for data privacy reasons.

Is this strategy worth pursuing? What are we missing? Joel and I would be keen to get some feedback. So please feel free to use the comments section below to share your thoughts or to send an email here.

One response to “Ranking Aerial Imagery for Disaster Damage Assessments”