I came across some interesting finds at the National Air and Space Museum this weekend. The World War One (WWI) exhibit had this large, back-lit crisis map: 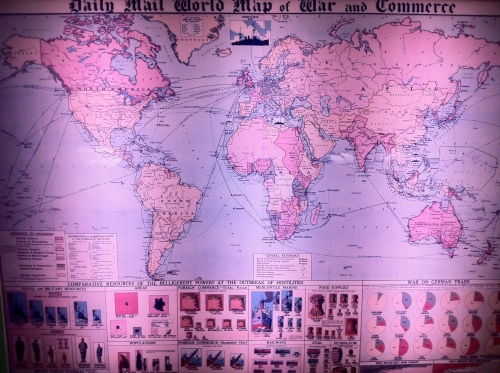 Now, war maps are nothing new. In this previous blog post, I noted that, “In 1668, Louis XIV of France commissioned three-dimensional scale models of eastern border towns, so that his generals in Paris and Versailles could plan realistic maneuvers. […] As late as World War II, the French government guarded them as military secrets with the highest security classification” (see picture). What struck me about the crisis map of WWI was the text above the title:

“To satisfy the public’s desire for information about the war, newspapers published war maps that provided the locations and military capabilities of the warring nations. This map, published at the outbreak of hostilities illustrates the British view of the war’s global scope.” I’m intrigued by this find and wonder how often these maps were updated and what sources were used. Would public opinion at the time have differed had live crowdsourced crisis maps existed?

Towards the end of the WWI exhibit, I came across this sign, originally posted near the entrances of the London Underground. The warning relates to hostile German aircraft that had begun to bomb London in early 1915. On September 8, a Zepellin raid on the city cause more than half a million pounds of damage.

What stuck me about this warning were the following instructions: “In the event of a hostile aircraft being seen in country districts, the nearest Naval, Military or Police Authorities should, if possible, be advised immediately by Telephone of the time of appearance, the direction of flight, and whether the aircraft is an Airship or an Aeroplane.” Crowdsourcing early warnings of WWI attacks.

Know of other interesting examples of crowsourcing during the first (or second) world war? If so, please feel free to share in the comments section below, I’d love to compile more examples.