The massive floods that swept through Queensland, Australia in 2010/2011 put an area almost twice the size of the United Kingdom under water. And now, a year later, Queensland braces itself for even worse flooding: 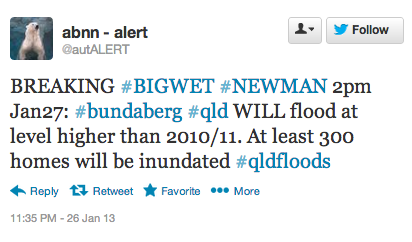 More than 35,000 tweets with the hashtag #qldfloods were posted during the height of the flooding (January 10-16, 2011). One of the most active Twitter accounts belonged to the Queensland Police Service Media Unit: @QPSMedia. Tweets from (and to) the Unit were “overwhelmingly focussed on providing situational information and advice” (1). Moreover, tweets between @QPSMedia and followers were “topical and to the point, significantly involving directly affected local residents” (2). @QPSMedia also “introduced innovations such as the #Mythbuster series of tweets, which aimed to intervene in the spread of rumor and disinformation” (3). 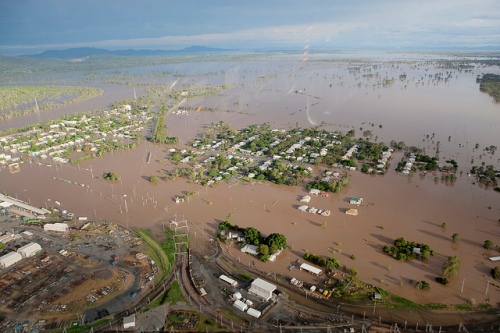 On the evening of January 11, @QPSMedia began to post a series of tweets with #Mythbuster in direct response to rumors and misinformation circulating on Twitter. Along with official notices to evacuate, these #Mythbuster tweets were the most widely retweeted @QPSMedia messages.” They were especially successful. Here is a sample: “#mythbuster: Wivenhoe Dam is NOT about to collapse! #qldfloods”; “#mythbuster: There is currently NO fuel shortage in Brisbane. #qldfloods.” 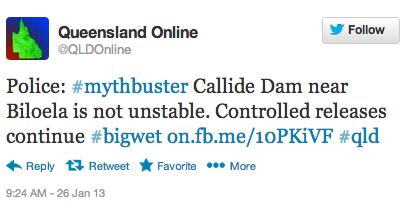 This kind of pro-active intervention reminds me of the #fakesandy hashtag used during Hurricane Sandy and FEMA’s rumor control initiative during Hurricane Sandy. I expect to see greater use of this approach by professional emergency responders in future disasters. There’s no doubt that @QPSMedia will provide this service again with the coming floods and it appears that @QLDonline is already doing so (above tweet). Brisbane’s City Council has also launched this Crowdmap marking latest road closures, flood areas and sandbag locations. Hoping everyone in Queensland stays safe!

In the meantime, here are some relevant statistics on the crisis tweets posted during the 2010/2011 floods in Queensland: