How to Program UAV Flights for Humanitarian Missions

UAVs are increasingly being flown autonomously rather than manually. But how does this actually work? In this blog post, I seek to “demystify” the process of programming UAV flights. While a number of platforms exist to program UAVs, they largely resemble each other. So I used the eMotion software that comes with senseFly’s eBee UAV to provide the demo below, which is actually based on a real humanitarian mission in the Philippines after Typhoon Haiyan. Please be sure to read the Humanitarian UAV Network’s Code of Conduct and Operational Check List before programming any UAV flights for humanitarian missions.

This demo is for simple flights only. If you’re flying near hills or mountains, for example, you’ll need to upload elevation data. I’ll provide a demo on how to program more complicated flights in the future. Of course, humanitarian UAV missions don’t end with the landing. The imagery needs to be analyzed and translated into information products to support decision-making. This requires using image processing platforms like Pix4D and PhotoScan. I’ll provide a demo on this in the future. In the meantime, if you’ve captured aerial videos or pictures of disaster areas, the easiest way to share them with humanitarian organizations and others is by posting them on the Humanitarian UAV Network’s Crisis Map. You can also partner with Humanitarian OpenStreetMap and MicroMappers to crowdsource the analysis of aerial imagery. These groups can be contacted via the Digital Humanitarian Network.

An Operational Check-List for Flying UAVs in Humanitarian Settings

The Humanitarian UAV Network (UAViators) has taken off much faster than I expected. More than 240 members in 32 countries have joined the network since it’s launch just a few weeks ago.

I was also pleasantly surprised by the number of humanitarian organizations that got in touch with me right after the launch. Many of them are just starting to explore this space. And I found it refreshing that every single one of them considers the case for humanitarian UAVs to be perfectly obvious. Almost all of the groups also mentioned how they would have made use of UAVs in recent disasters. Some are even taking steps now to set up rapid-response UAV teams.

My number one priority after launching the network was to start working on a Code of Conduct to guide the use of UAVs in humanitarian settings—the only one of it’s kind as far as I know. While I had initially sought to turn this Code of Conduct into a check-list, it became clear from the excellent feedback provided by members and the Advisory Board that we needed two separate documents. So my RA’s and I have created a more general Code of Conduct along with a more detailed operational check-list for flying UAVs in humanitarian settings. You’ll find the check-list here. Big thanks to Advisory Board member Gene Robinson for letting me draw on his excellent book for this check-list. Both the Code of Conduct and Check-List will continue to be updated on a monthly basis, so please do chime in and help us improve them.

One of my main goals for 2014 is to have the Code of Conduct officially and publicly endorsed by both UAV companies and humanitarian organizations alike. This may end up being a time-consuming process, but this endorsement is a must if the Code of Conduct is to become an established policy document. Another one of my goals is to organize a Humanitarian UAV Strategy Meeting in November that will bring together a select number of experts in Humanitarian UAVs with seasoned humanitarian professionals from the UN and Red Cross. The purpose of this meeting is to establish closer relationships between the humanitarian and UAV communities in order to facilitate coordination and information sharing during major disasters.

Also in the works for this year is a disaster response simulation with partners in the Philippines (including local government). The purpose of this simulation will be to rapidly deploy UAVs over a made-believe disaster area; then to upload the thousands of aerial images to MicroMappers to rapidly crowdsource the tagging of features-of-interest. Our (ambitious) hope is that the entire process can be done within a matter of hours. The simulation will help us identify the weak-links in our workflows. Our Filipino partners will also be using the resulting tagged images to create more accurate machine learning classifiers for automated feature detection. This will help them accelerate the analysis of aerial imagery during real disasters.

So stay tuned for updates, which will be posted on iRevolution and UAViators.

Crisis Mapping and Agent Based Models

The idea of combining crisis mapping and agent based modeling has been of great interest to me ever since I took my first seminar on complex systems back in 2006. There are few studies out there that ground agent based models (ABM) on conflict dynamics within a real-world geographical space. One of those few, entitled “Global Pattern Formation and Ethnic/Cultural Violence,” appeared in the journal Science in 2007.

Note that I take issue with a number of assumptions that underlie this study as well as the methodology used. That said, the study is a good illustration of how crisis mapping and ABM can be combined.

The authors suggest that global patterns of violence arise due to “the structure of boundaries between groups rather than the groups themselves.” In other words, the spatial boundaries between different populations create a propensity for conflict, “so that spatial heterogeneity itself is predictive of local violence.”

The authors argue that this pattern is “consistent with the natural dynamics of “type separation,” a specific pattern formation also observed in physical and chemical phase separation. The unit of analysis in this study’s ABM, however, is the local ethnic “patch size,” which represents the smallest unit of ethnic members that act collectively as one.

A simple model of type separation assumes that individuals (or ethnic units) prefer to move to areas where more individuals of the same time reside. Playing the ABM yields progressively larger patches or “islands” of each ethnic group over time. The relationship between patch size and time follows a power law distribution, “a universal behavior that does not depend on many of the details of the model […].”

In other words, the model depicts scale invariant behavior, which implies that “a number of individual agents of the model can be aggregated into a single agent if time is rescaled correspondingly without changing the behavior at the larger scales.”

To model violent conflict, the authors assume that both highly mixed regions and well-segregated groups do not engage in violence. The rationale regarding the former being that in highly mixed regions, “groups of the same type are not large enough to develop strong collective identities, or to identify public spaces as associated with one or another group. When groups are much bigger, “they typically form self-sufficient entities that enjoy local sovereignty.”

To this end, the authors argue that partial separation with poorly defined boundaries fosters conflict when groups are of a size that allows them to impose cultural norms on public spaces, “but where there are still intermittent violations of these rules due to the overlap of cultural domains.” In other words, conflict is a function of population distribution and not of the “specific mechanism by which the population achieves this structure, which may include internally or externally directed migrations.”

The model is therefore founded on the principle that the conditions under which violent conflict becomes likely can be determined by census.

The authors used 1991 census data of the former Yugoslavia and the Indian census data from 2001 and converted the data into map form (see figure below), which they used in an ABM simulation. “Mathematically, the expected violence was determined by detecting patches consisting of islands or peninsulas of one type surrounded by populations of other types.”

A wavelet filter that has a positive center and a negative surround (also called a Mexican hat filter) was used to detect and correlate the islands/peninsulas.

The red overlays depicted in Figure D above represents the maximum correlation over population types. The diameter of the positive region of the wavelet, i.e., “the size of the local population patches that are likely to experience violence,” is the main predictor of the model.

To test the predictive power of their model, the authors compared the locations of red overlays with actual incidents of violence as reported in books, newspapers and online sources (the yellow dots in the crisis map below).

Their statistical results indicate that the Yugoslavia crisis map model has a correlation of 0.89 with reports. Moreover, “the predicted results are highly robust to parameter variation [patch size], with essentially equivalent agreement obtained for filter diameters ranging from 18 to 60 km […].”

The statistical results for the India crisis map model indicate a correlation of 0.98. The range of the patch size overlapped that of the former Yugoslavia but is shifted to larger values, up to 100km. This suggests that “regions of width less than 10km or greater than 100km may provide sufficient mixing or isolation to reduce the chance of violence.”

While the authors recognize the importance of social and institutional drivers of violence, they argue that, “influencing the spatial structure might address the conditions that promote violence described [in this study].” In sum, they suggest that, “peaceful coexistence need not require complete integration.”

What do you think?

I recently had a fascinating meeting in Seattle with Larry Pixa, Microsoft’s Senior Manager for Disaster Preparedness & Response Program. What I thought would be a half-hour meeting turned into an engaging two-hour conversation. I wish we had had even more time. 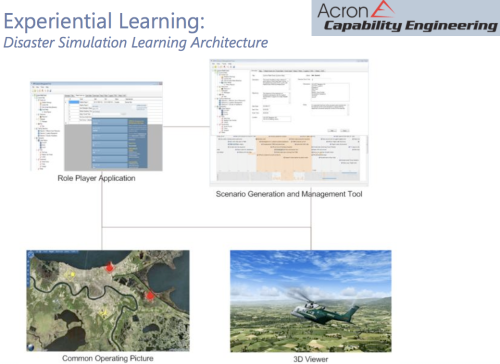 Harvard Humanitarian Initiative (HHI) co-Chair Dr. Jennifer Leaning and I had a conversation two years ago on the need to merge disaster training with serious gaming and 3-D crisis mapping. Her vision, for example, was to recreate downtown Monrovia as a virtual world with avatars and have both live and manual data feeds simulate the virtual environment, a.k.a. immersive realism meets reality mining.

This world would then be used to create scenarios for disaster preparedness and response training, much like my colleagues at ICNC have done by developing a serious game called “A Force More Powerful” which uses artificial intelligence and real-world scenarios to train nonviolent activists.

Larry and his colleagues at Acron are pushing the envelope of disaster simulation for training purposes. They are integrating Acron’s serious games know-how with Microsoft ESP and the video game engine of Microsoft’s Flight Simulator platform with dynamic crisis mapping to develop a pilot that closely resembles the vision set out by Jennifer back in 2006. I personally thought we were still a year or two away from having a pilot. Not so. Larry will be presenting the pilot at HHI’s Humanitarian Health Summit in March 2009.

The goal for the pilot, or as we the United Nation’s World Food Program (WFP) call it, the “software-based proof of concept,” is to establish the proof of concept into a “training platform” to be combined with training materials that will serve as a demonstrate the tool to governments and international organizations worldwide; particularly vis-a-vis training to build preparedness & response capabilities and informed decision making for the adoption of technologies to enable or improve disaster response and crisis management.

So our goal is to engage with any/all appropriate agencies to provide training against the “training platform”; the training will be based on some key scenarios in Bangladesh acquired through the partnership between WFP and Microsoft.

Successful training requires that we actually remember the training. But we all know from conventional class learning that we retain little of what we read. On the other hand, our memory retains almost all of what we do and that, according to Larry, is what his new disaster simulations platform seeks to achieve. 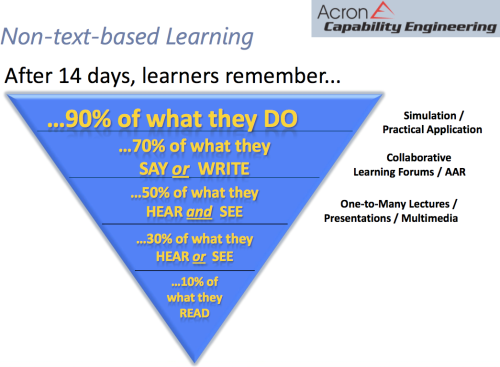