The Economist just published a fascinating article on fluid dynamics called “The Skeleton of Water” which may have important implications for Crisis Mapping Analytics. We often speak of conflict in terms of waves, e.g., “preventing the next wave of conflict,” but there may be more to the analogy than meets the eye. 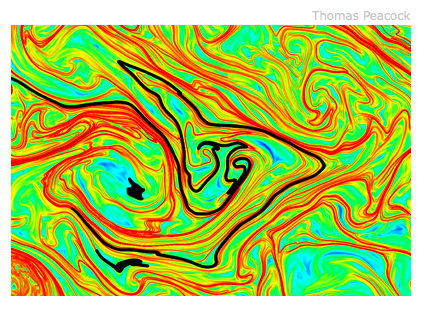 One of the main challenges that Crisis Mapping Analytics faces is the complexity involved in modeling conflict dynamics over space and time. But we’re hardly the first to face this challenge. Take the field of fluid dynamics, which is the subject of the article in question. Breakthrough research now reveals that hidden structures within liquids and gasses guide the movement of everything from pollution to airplanes.

The atmosphere and the ocean are, it seems, dominated by invisible barriers that have come to be known as Lagrangian Coherent Structures.

To understand what a Lagrangian Coherent Structure [LCS] is, it helps to imagine a crowd at a railway terminus […]. Some people will be arriving. Some will be leaving. And, whichever they are doing, they will be going to and from numerous different platforms.

The result is chaos, but structured chaos. What emerges is a shifting pattern of borders between groups of people with different goals. These borders are Lagrangian coherent structures. They are intangible, immaterial and would be undetectable if the passengers stopped moving. But they are also real enough to be treated mathematically.

And it turns out to be easier to study the behaviour of such fluids by looking at the barriers than at the bodies of fluid which those barriers separate.

Scientists across numerous fields are now jumping on the Lagrangian bandwagon to explore the applicability of LCS to their work.

For example, a professor at CalTech recently “used the technique to study the hunting behaviour of jellyfish. He has shown how parts of the ocean are temporarily protected from the depredations of these creatures because they cannot cross the invisible barriers imposed by Lagrange.” Meanwhile, another professor notes that “the coherent-structure approach might also be used to help predictions of the passage of hurricanes; they, too, are constrained by the invisible barriers that Lagrange’s theory describes.”

There is also reason to believe that conflict follows a power law (like earthquakes, forest fires, etc.). In other words, conflict may be scale invariant. This may imply that there is no “average size” of conflict regardless of scale, i.e., from interpersonal to international conflict. As it turns out,  “Lagrangian coherent structures can appear at all sorts of scales. What goes for an airport or a bay can be scaled up to an ocean, or the air above it, and down to the flow off an aircraft’s wingtip, or a ship’s hull.”

One of the exciting conclusions from this latest research in fluid dynamics is that “boundaries between things are often as important as the things themselves.” In other words, we need to think more about what artists call negative space, which is “ the space around and between the subject(s) of an image. Negative space may be most evident when the space around a subject, and not the subject itself, forms an interesting or artistically relevant shape, and such space is occasionally used to artistic effect as the “real” subject of an image.”

Take the following picture, for example. 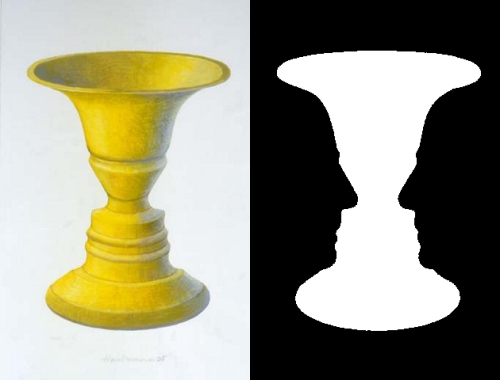 There is an intimate relationship between the object and the space around it. Negative spaces are important because they may reveal otherwise hidden patterns. In crisis mapping, like fluid dynamics, we need to delineate this negative space over time to identify patterns in three dimensional space. This is what the mathematics of Lagrangian Coherent Structures may allow us to do.

And so, it is very tempting to start thinking about conflict (and peace) in terms of fluid dynamics given the context of crisis mapping. Have we been too preoccupied with crisis data instead of modeling the boundaries and event trajectories? Perhaps conflict flows like a river, with turbulent eddies producing violent pathways while other areas are clear, still pools of peace. So why not collaborate with mathematicians to find out whether LCS’s can shed light on why “islands of peace” sometimes exist in a sea of conflict?