My 20+ page study on verifying crowdsourced information is now publicly available here as a PDF and here as an open Google Doc for comments. I very much welcome constructive feedback from iRevolution readers so I can improve the piece before it gets published in an edited book next year.

False information can cost lives. But no information can also cost lives, especially in a crisis zone. Indeed, information is perishable so the potential value of information must be weighed against the urgency of the situation. Correct information that arrives too late is useless. Crowdsourced information can provide rapid situational awareness, especially when added to a live crisis map. But information in the social media space may not be reliable or immediately verifiable. This may explain why humanitarian (and news) organizations are often reluctant to leverage crowdsourced crisis maps. Many believe that verifying crowdsourced information is either too challenging or impossible. The purpose of this paper is to demonstrate that concrete strategies do exist for the verification of geo-referenced crowdsourced social media information. The study first provides a brief introduction to crisis mapping and argues that crowdsourcing is simply non-probability sampling. Next, five case studies comprising various efforts to verify social media are analyzed to demonstrate how different verification strategies work. The five case studies are: Andy Carvin and Twitter; Kyrgyzstan and Skype; BBC’s User-Generated Content Hub; the Standby Volunteer Task Force (SBTF); and U-Shahid in Egypt. The final section concludes the study with specific recommendations.

Update: See also this link and my other posts on Information Forensics.

Using a Map to Bear Witness in Egypt #Jan25

The Cairo-based Development and Institutionalization Support Center (DISC) has just launched their #U-Shahid map below. DISC previously used the Ushahidi platform to monitor the country’s Parliamentary Elections last November and December  (see this post for more info). This means they already know the technology and have a trained network of active crisis mappers that can verify reports before they are mapped. 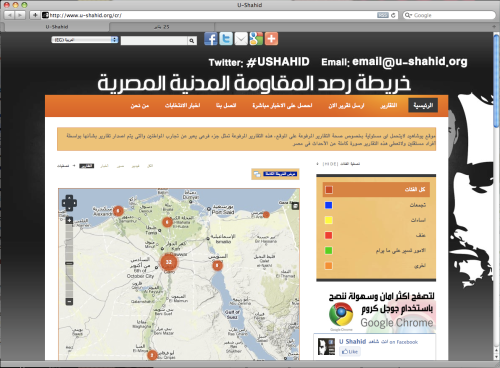 The events in Egypt over the past two weeks have been nothing short of unprecedented. The Mubarak regime clamped down on many forms of communication including the Internet, cell phones and SMS. There were also reports of landline phones being blocked. The word still go out, however. And with Internet access now restored, the map will get out as well just as it did in the Sudan over the past few days.

DISC has mapped some 50 reports based on events that took place over the past week. Take this report below, for example, which includes a YouTube video of protests. The map includes dozens of categories, including Riots, Breaking and looting, Arrests, Violence against protesters, Spraying water and Firing tear gas, for example.

Notice how DISC has made it very easy to share information on individual events by allow direct Tweeting, Facebook posting, etc.

The group has also enabled the subscribe to alerts feature, which allows individuals to automatically get reports sent to their email and cell phone. 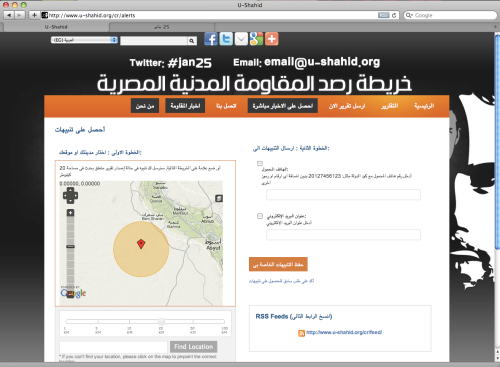 Since Egypt just got back online, we expect the map to receive more reports in the coming days. Perhaps the group may also end up using the dedicated Ushahidi smart phone apps to distribute the mapping further.

The Arabic Network for Human Rights Information (ANHRI) launched this Jan 25th CrowdMap in Cairo days before the regime shut down Internet access. It hasn’t been updated since but there are now discussions about reactivating the map to provide information on the location of ATMs, for example. 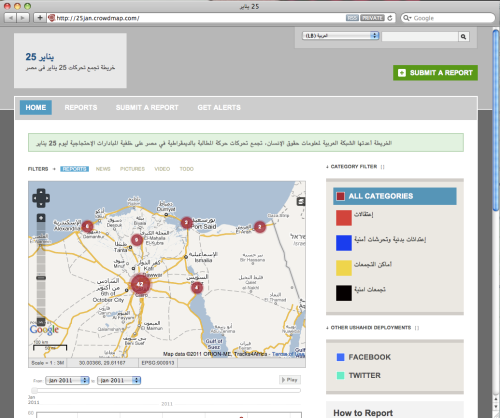 An ongoing and pressing concern about these maps (and others) is of course security. Crisis maps can depict important information that can be used for good and ill. We hope local groups that use these tools in non-permissive environments take every precaution possible when doing so as repressive regimes are becoming more sophisticated in electronic surveillance.  To learn more about communicating safely in such situations, we recommend some of the following links:

Crisis mapping is redefining the way we think about maps. Today’s maps are alive and dynamic. They are not hard copy static objects like this historical map of Ancient Egypt dating from 1,450 BC. Maps, like books, were written by the winners, the elite. They reflected and projected power. They depicted a fixed reality through one lens.

Today’s crisis maps can give voice to the distributed voiceless. They integrate tools like email, SMS, Twitter, Facebook, YouTube, Flickr, etc. What does this all add up to? “Will the triangulated crisis map be regarded as the new first draft of history?” asks New York Times journalist Anand Giridharadas. He considers some of the implications in this excellent piece,

“They say that history is written by the victors. But now, before the victors win, there is a fresh chance to scream out, with a text message that will not vanish. What we would know about what passed between Turks and Armenians, between Germans and Jews — and indeed would it have happened at all — if each of them had had a chance to declare and be heard saying: ‘I was here, and this is what happened to me?'”