I really enjoyed speaking with Captain Wayner Porter whilst at PopTech 2011 last week. We both share a passion for applying insights from complexity science to different disciplines. I’ve long found the analogies between earthquakes and conflicts intriguing. We often talk of geopolitical fault lines, mounting tensions and social stress. “If this sounds at all like the processes at work in the Earth’s crust, where stresses build up slowly to be released in sudden earthquakes … it may be no coincidence” (Buchanan 2001).

To be sure, violent conflict is “often like an earthquake: it’s caused by the slow accumulation of deep and largely unseen pressures beneath the surface of our day-to-day affairs. At some point these pressures release their accumulated energy with catastrophic effect, creating shock waves that pulverize our habitual and often rigid ways of doing things…” (Homer-Dixon 2006).

But are fore shocks and aftershocks in social systems really as discernible as well? Like earthquakes, both inter-state and internal wars actually occur with the same statistical pattern (see my previous blog post on this). Since earthquakes and conflicts are complex systems, they also exhibit emergent features associated with critical states. In sum, “the science of earthquakes […] can help us understand sharp and sudden changes in types of complex systems that aren’t geological–including societies…” (Homer-Dixon 2006).

Back in 2006, I collaborated with Professor Didier Sornette and Dr. Ryan Woodard from the Swiss Federal Institute of Technology (ETHZ) to assess whether a mathematical technique developed for earthquake prediction might shed light on conflict dynamics. I presented this study along with our findings at the American Political Science Association (APSA) convention last year (PDF). This geophysics technique, “superposed epoch analysis,” is used to identify statistical signatures before and after earthquakes. In other words, this technique allows us to discern whether any patterns are discernible in the data during foreshocks and aftershocks. Earthquake physicists work from global spatial time series data of seismic events to develop models for earthquake prediction. We used a global time series dataset of conflict events generated from newswires over a 15-year period. The graph below explains the “superposed epoch analysis” technique as applied to conflict data. 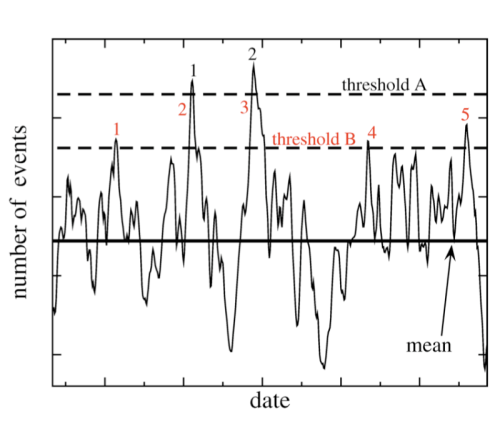 The curve above represents a time series of conflict events (frequency) over a particular period of time. We select arbitrary threshold, such as “threshold A” denoted by the dotted line. Every peak that crosses this threshold is then “copied” and “pasted” into a new graph. That is, the peak, together with the data points 25 days prior to and following the peak is selected.

The peaks in the new graph are then superimposed and aligned such that the peaks overlap precisely. With “threshold A”, two events cross the threshold, five for “threshold B”. We then vary the thresholds to look for consistent behavior and examine the statistical behavior of the 25 days before and after the “extreme” conflict event. For this study, we performed the computational technique described above on the conflict data for the US, UK, Afghanistan, Columbia and Iraq. 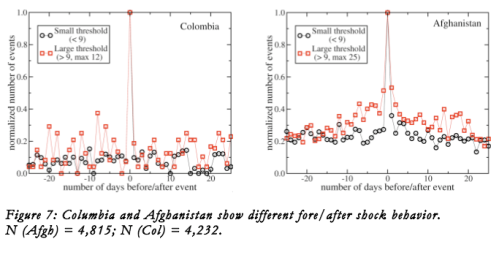 The foreshock and aftershock behaviors in Iraq and Afghanistan appear to be similar. Is this because the conflicts in both countries were the result of external intervention, i.e., invasion by US forces (exogenous shock)?

In the case of Colombia, an internal low intensity and protracted conflict, the statistical behavior of foreshocks and aftershocks are visibly different from those of Iraq and Afghanistan. Do the different statistical behaviors point to specific signature associated with exogenous and endogenous causes of extreme events? Does one set of behavior contrast with another one in the same way that old wars and new wars differ?

Another possibility still is that extreme events are the product of both endo-genous and exogenous effects. How would this dynamic unfold? To answer these questions, we need to go beyond political science. The distinction between responses to endogenous and exogenous processes is a fundamental property of physics and is quantified as the fluctuation-dissipation theorem in statistical mechanics. This theory has been successfully applied to social systems (such as books sales) as a way to help understand different classes of causes and effects.

Questions for future research: Do conflict among actors in social systems display measurable endogenous and exogenous behavior? If so, can a quantitative signature of precursory (endogenous) behavior be used to help recognize and then reduce growing conflict? The next phase of this research will be to apply the above techniques to the conflict dataset already used to examine the statistical behavior of foreshocks and aftershocks.