This study (PDF) analyzes the community of Twitter users who disseminated  information during the crisis caused by the Australian floods in 2010-2011. “In times of mass emergencies, a phenomenon known as collective behavior becomes apparent. It consists of socio-behaviors that include intensified information search and information contagion.” The purpose of the Australian floods analysis is to reveal interesting patterns and features of this online community using social network analysis (SNA). 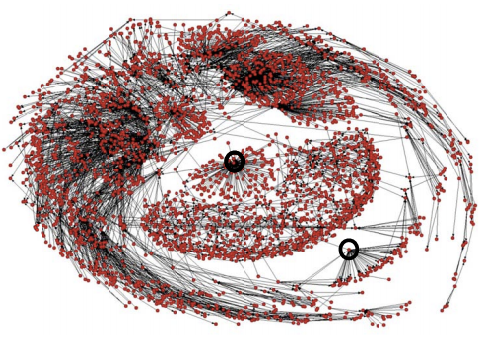 The authors analyzed 7,500 flood-related tweets to understand which users did the tweeting and retweeting. This was done to create nodes and links for SNA, which was able to “identify influential members of the online communities that emerged during the Queensland, NSW and Victorian floods as well as identify important resources being referred to. The most active community was in Queensland, possibly induced by the fact that the floods were orders of mag-nitude greater than in NSW and Victoria.”

The analysis also confirmed “the active part taken by local authorities, namely Queensland Police, government officials and volunteers. On the other hand, there was not much activity from local authorities in the NSW and Victorian floods prompting for the greater use of social media by the authorities concerned. As far as the online resources suggested by users are concerned, no sensible conclusion can be drawn as important ones identified were more of a general nature rather than critical information. This might be comprehensible as it was past the impact stage in the Queensland floods and participation was at much lower levels in the NSW and Victorian floods.”

4 responses to “Social Network Analysis of Tweets During Australia Floods”