The Syria Tracker Crisis Map is without doubt one of the most impressive crisis mapping projects yet. Launched just a few weeks after the protests began one year ago, the crisis map is spearheaded by a just handful of US-based Syrian activists have meticulously and systematically documented 1,529 reports of human rights violations including a total of 11,147 killings. As recently reported in this NewScientist article, “Mapping the Human Cost of Syria’s Uprising,” the crisis map “could be the most accurate estimate yet of the death toll in Syria’s uprising […].” Their approach? “A combination of automated data mining and crowdsourced human intelligence,” which “could provide a powerful means to assess the human cost of wars and disasters.” 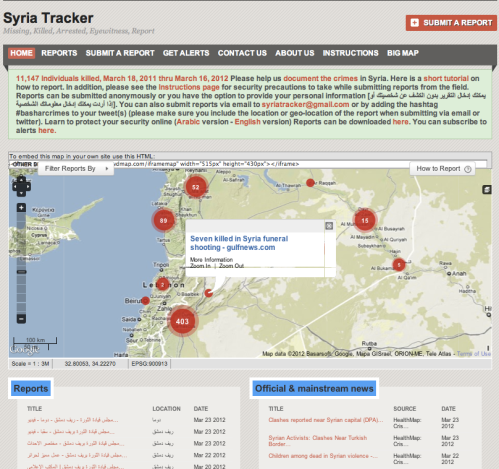 On the data-mining side, Syria Tracker has repurposed the HealthMap platform, which mines thousands of online sources for the purposes of disease detection and then maps the results, “giving public-health officials an easy way to monitor local disease conditions.” The customized version of this platform for Syria Tracker (ST), known as HealthMap Crisis, mines English information sources for evidence of human rights violations, such as killings, torture and detainment. As the ST Team notes, their data mining platform “draws from a broad range of sources to reduce reporting biases.” Between June 2011 and January 2012, for example, the platform collected over 43,o00 news articles and blog posts from almost 2,000 English-based sources from around the world (including some pro-regime sources).

Syria Tracker combines the results of this sophisticated data mining approach with crowdsourced human intelligence, i.e., field-based eye-witness reports shared via webform, email, Twitter, Facebook, YouTube and voicemail. This naturally presents several important security issues, which explains why the main ST website includes an instructions page detailing security precautions that need to be taken while sub-mitting reports from within Syria. They also link to this practical guide on how to protect your identity and security online and when using mobile phones. The guide is available in both English and Arabic.

Eye-witness reports are subsequently translated, geo-referenced, coded and verified by a group of volunteers who triangulate the information with other sources such as those provided by the HealthMap Crisis platform. They also filter the reports and remove dupli-cates. Reports that have a low con-fidence level vis-a-vis veracity are also removed. Volunteers use a dig-up or vote-up/vote-down feature to “score” the veracity of eye-witness reports. Using this approach, the ST Team and their volunteers have been able to verify almost 90% of the documented killings mapped on their platform thanks to video and/or photographic evidence. They have also been able to associate specific names to about 88% of those reported killed by Syrian forces since the uprising began.

Depending on the levels of violence in Syria, the turn-around time for a report to be mapped on Syria Tracker is between 1-3 days. The team also produces weekly situation reports based on the data they’ve collected along with detailed graphical analysis. KML files that can be uploaded and viewed using Google Earth are also made available on a regular basis. These provide “a more precisely geo-located tally of deaths per location.”

In sum, Syria Tracker is very much breaking new ground vis-a-vis crisis mapping. They’re combining automated data mining technology with crowdsourced eye-witness reports from Syria. In addition, they’ve been doing this for a year, which makes the project the longest running crisis maps I’ve seen in a hostile environ-ment. Moreover, they’ve been able to sustain these import efforts with just a small team of volunteers. As for the veracity of the collected information, I know of no other public effort that has taken such a meticulous and rigorous approach to documenting the killings in Syria in near real-time. On February 24th, Al-Jazeera posted the following estimates:

At the time, Syria Tracker had a total of 7,901 documented killings associated with specific names, dates and locations. While some duplicate reports may remain, the team argues that “missing records are a much bigger source of error.” Indeed, They believe that “the higher estimates are more likely, even if one chooses to disregard those reports that came in on some of the most violent days where names were not always recorded.”

The Syria Crisis Map itself has been viewed by visitors from 136 countries around the world and 2,018 cities—with the top 3 cities being Damascus, Washington DC and, interestingly, Riyadh, Saudia Arabia. The witnessing has thus been truly global and collective. When the Syrian regime falls, “the data may help sub-sequent governments hold him and other senior leaders to account,” writes the New Scientist. This was one of the principle motivations behind the launch of the Ushahidi platform in Kenya over four years ago. Syria Tracker is powered by Ushahidi’s cloud-based platform, Crowdmap. Finally, we know for a fact that the International Criminal Court (ICC) and Amnesty International (AI) closely followed the Libya Crisis Map last year.

My colleagues at Resolve and Invisible Children have just launched their very impressive Crisis Map of LRA Attacks in Central Africa. The LRA, or Lord’s Resistance Army, is a brutal rebel group responsible for widespread mass atrocities, most of which go completely unreported because the killings and kidnappings happen in remote areas. This crisis map has been a long time in the making so I want to sincerely congratulate Michael Poffenberger, Sean Poole, Adam Finck, Kenneth Transier and the entire team for the stellar job they’ve done with this project. The LRA Crisis Tracker is an  important milestone for the fields of crisis mapping and early warning.

The Crisis Tracker team did an excellent job putting together a detailed code book (PDF) for this crisis map, a critical piece of any crisis mapping and conflict early warning project that is all too-often ignored or rushed by most. The reports mapped on Crisis Tracker come from Invisible Children’s local Early Warning Radio Network, UN agencies and local NGOs. Invisible Children’s radio network also provides local communities with the ability to receive warnings of LRA activity and alert local security forces to LRA violence.

When I sat down with Resolve’s Kenneth Transier earlier this month, he noted that the majority of the reports depicted on their LRA crisis map represent new and original information. He also noted that they currently have 22 months of solid data, with historical and real-time data entry on-going. You can download the data here. Note that the public version of this data does not include the most sensitive information for security reasons. 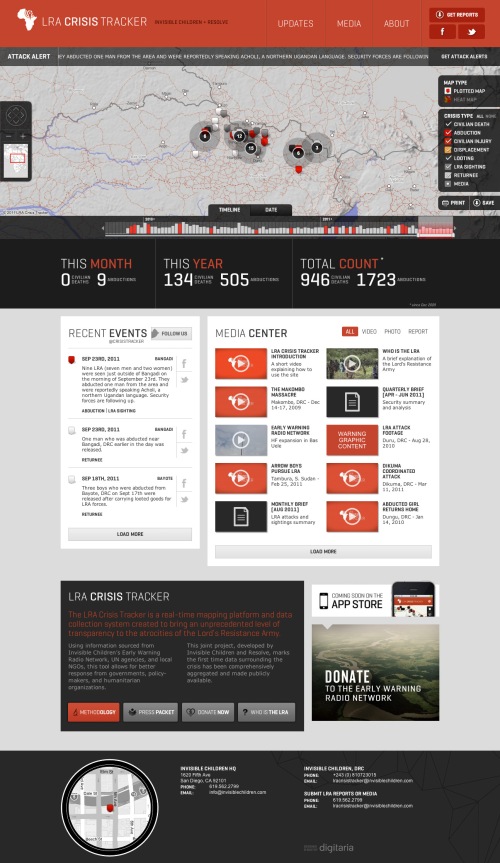 The Crisis Tracker team also provide monthly and quarterly security briefs, analyzing the latest data they’ve collected for trends and patterns. This project is by far the most accurate, up-to-date and comprehensive source of information on LRA atrocities, which the partners hope will improve efforts to protect vulnerable communities in the region. Indeed, the team has joined forces with a number of community-run protection organizations in Central Africa who hope to benefit from the team’s regular crisis reports.

The project is also innovative because of the technology being used. Michael got in touch about a year ago to learn more about the Ushahidi platform and after a series of conversations decided that they needed more features than were currently available from Ushahidi, especially on the data visualization side. So I put them in touch with my colleagues at Development Seed. Ultimately, the team partnered with a company called Digitaria which used the backend of a Sales-force platform and a customized content management system to publish the in-formation to the crisis map. This an important contribution to the field of crisis mapping and I do hope that Digitaria share their technology with other groups. Indeed, the fact that new crisis mapping technologies are surfacing is a healthy sign that the field is maturing and evolving.

This project is definitely worth keeping an eye on. I’ve invited Crisis Tracker to present at the 2011 International Conference of Crisis Mappers in Geneva in November (ICCM 2011). I do hope they’ll be able to participate. In the meantime, you can follow the team and their updates via twitter at @crisistracker. The Crisis Tracker iPhone and iPad apps and should be out soon.