Update 1: MicroMappers is now public! Anyone can join to help the efforts!
Update 2: Results of MicroMappers Response to Pakistan Earthquake [Link]

MicroMappers was not due to launch until next month but my team and I at QCRI received a time-sensitive request by colleagues at the UN to carry out an early test of the platform given yesterday’s 7.7 magnitude earthquake, which killed well over 300 and injured hundreds more in south-western Pakistan. 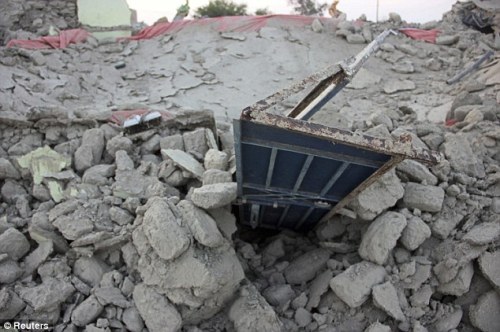 Shortly after this request, the UN Office for the Coordination of Humanitarian Affairs (OCHA) in Pakistan officially activated the Digital Humanitarian Network (DHN) to rapidly assess the damage and needs resulting from the earthquake. The award-winning Standby Volunteer Task Force (SBTF), a founding member of the DHN. teamed up with QCRI to use MicroMappers in response to the request by OCHA-Pakistan. This exercise, however, is purely for testing purposes only. We made this clear to our UN partners since the results may be far from optimal.

MicroMappers is simply a collection of microtasking apps (we call them Clickers) that we have customized for disaster response purposes. We just launched both the Tweet and Image Clickers to support the earthquake relief and may also launch the Tweet and Image GeoClickers as well in the next 24 hours. The TweetClicker is pictured below (click to enlarge). 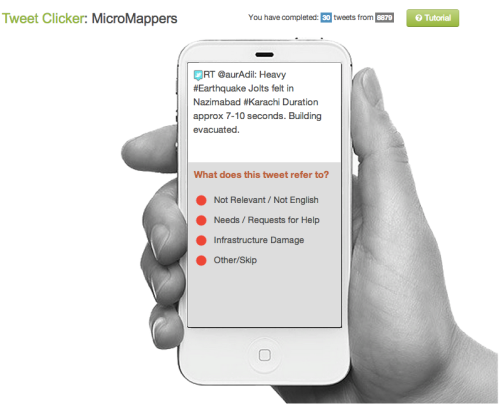 Thanks to our partnership with GNIP, QCRI automatically collected over 35,000 tweets related to Pakistan and the Earthquake (we’re continuing to collect more in real-time). We’ve uploaded these tweets to the TweetClicker and are also filtering links to images for upload to the ImageClicker. Depending on how the initial testing goes, we may be able to invite help from the global digital village. Indeed, “crowdsourcing” is simply another way of saying “It takes a village…” In fact, that’s precisely why MicroMappers was developed, to enable anyone with an Internet connection to become a digital humanitarian volunteer. The Clicker for images is displayed below (click to enlarge).

Now, whether this very first test of the Clickers goes well remains to be seen. As mentioned, we weren’t planning to launch until next month. But we’ve already learned heaps from the past few hours alone. For example, while the Clickers are indeed ready and operational, our automatic pre-processing filters are not yet optimized for rapid response. The purpose of these filters is to automatically identify tweets that link to images and videos so that they can be uploaded to the Clickers directly. In addition, while our ImageClicker is operational, our VideoClicker is still under development—as is our TranslateClicker, both of which would have been useful in this response. I’m sure will encounter other issues over the next 24-36 hours. We’re keeping track of these in a shared Google Spreadsheet so we can review them next week and make sure to integrate as much of the feedback as possible before the next disaster strikes.

Incidentally, we (QCRI) also teamed up with the SBTF to test the very first version of the Artificial Intelligence for Disaster Response (AIDR) platform for about six hours. As far as we know, this test represents the first time that machine learning classifiers for disaster resposne were created on the fly using crowdsourcing. We expect to launch AIDR publicly at the 2013 CrisisMappers conference this November (ICCM 2013). We’ll be sure to share what worked and didn’t work during this first AIDR pilot test. So stay tuned for future updates via iRevolution. In the meantime, a big, big thanks to the SBTF Team for rallying so quickly and for agreeing to test the platforms! If you’re interested in becoming a digital humanitarian volunteer, simply join us here.