My team and I at QCRI have just completed a detailed analysis of the 13,200+ tweets posted from one hour before the attacks began until two hours into the attack. The purpose of this study, which will be launched at CrisisMappers 2013 in Nairobi tomorrow, is to make sense of the Big (Crisis) Data generated during the first hours of the siege. A summary of our results are displayed below. The full results of our analysis and discussion of findings are available as a GoogleDoc and also PDF. The purpose of this public GoogleDoc is to solicit comments on our methodology so as to inform the next phase of our research. Indeed, our aim is to categorize and study the entire Westgate dataset in the coming months (730,000+ tweets). In the meantime, sincere appreciation go to my outstanding QCRI Research Assistants, Ms. Brittany Card and Ms. Justine MacKinnon for their hard work on the coding and analysis of the 13,200+ tweets. Our study builds on this preliminary review.

The following 7 figures summarize the main findings of our study. These are discussed in more detail in the GoogleDoc/PDF.

Figure 1: Who Authored the Most Tweets? 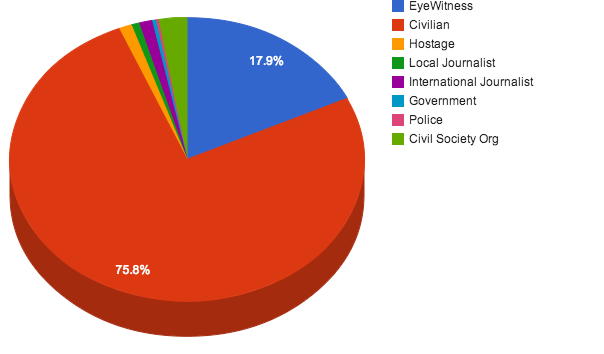 Figure 2: Frequency of Tweets by Eyewitnesses Over Time? 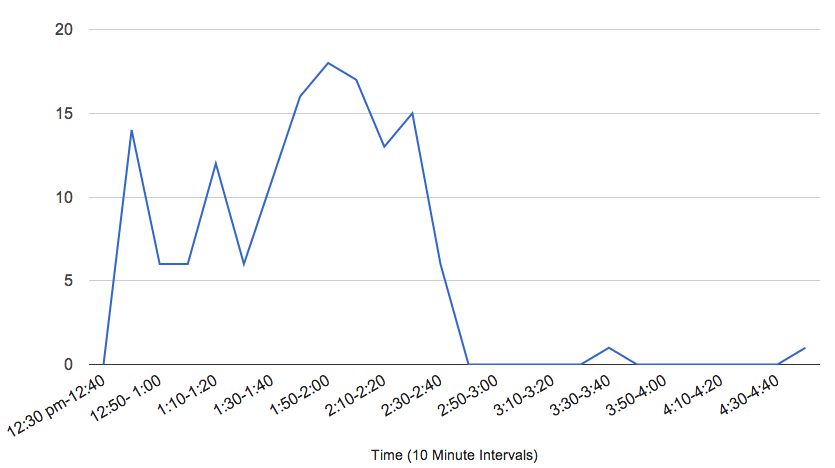 Figure 3: Who Were the Tweets Directed At? 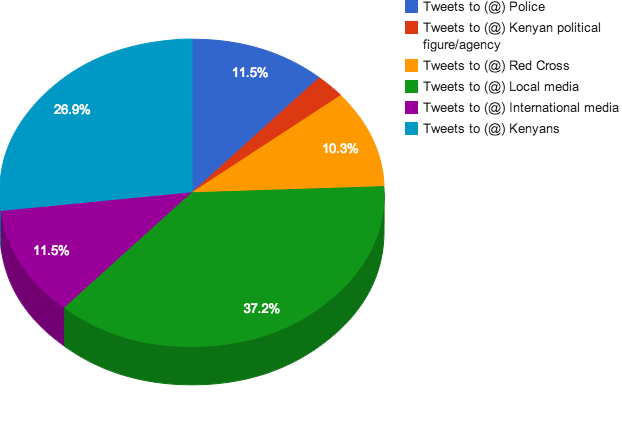 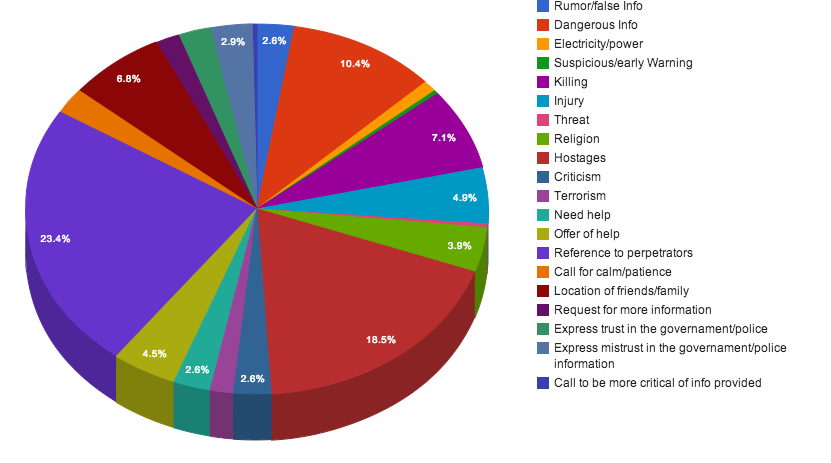 Figure 5: What Terms Were Used to Reference the Attackers? 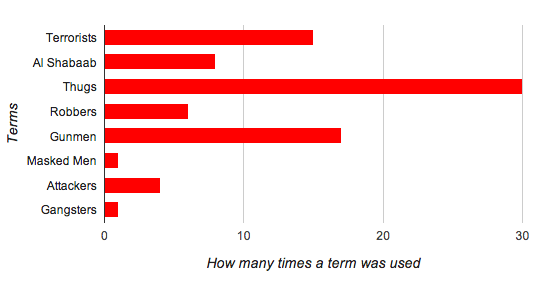 Figure 6: What Terms Were Used to Reference Attackers Over Time? 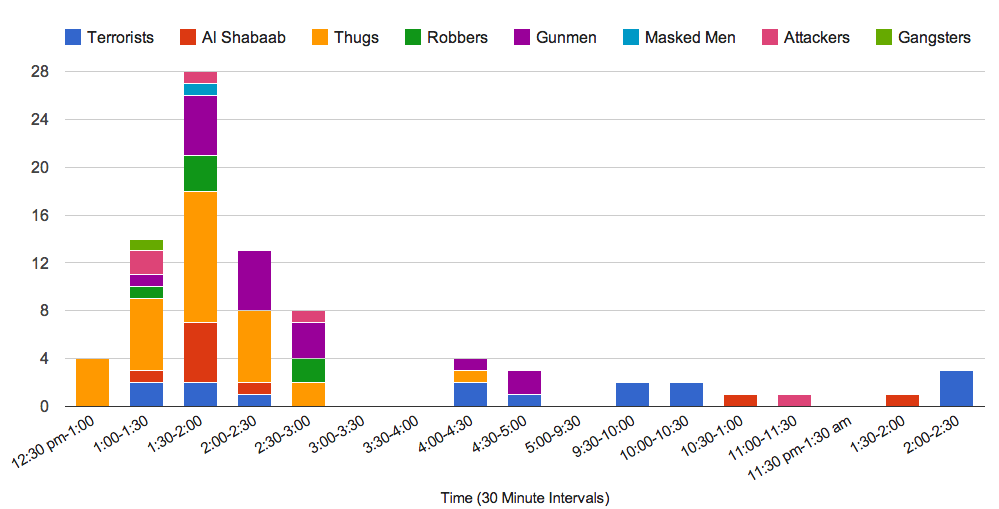 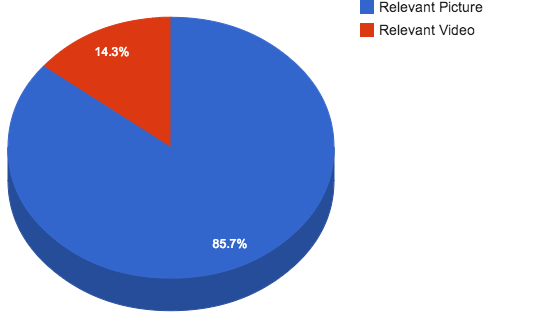 Over 1 million unique users posted more than 2.7 million tweets in just 3 days following the triple bomb blasts that struck Mumbai on July 13, 2011. Out of these, over 68,000 tweets were “original tweets” (in contrast to retweets) and related to the bombings. An analysis of these tweets yielded some interesting patterns. (Note that the Ushahidi Map of the bombings captured ~150 reports; more here).

One unique aspect of this study (PDF) is the methodology used to assess the quality of the Twitter dataset. The number of tweets per user was graphed in order to test for a power law distribution. The graph below shows the log distri-bution of the number of tweets per user. The straight lines suggests power law behavior. This finding is in line with previous research done on Twitter. So the authors conclude that the quality of the dataset is comparable to the quality of Twitter datasets used in other peer-reviewed studies.

I find this approach intriguing because Professor Michael Spagat, Dr. Ryan Woodard and I carried out related research on conflict data back in 2006. One fascinating research question that emerges from all this, and which could be applied to twitter datasets, is whether the slope of the power law says anything about the type of conflict/disaster being tweeted about, the expected number of casualties or even the propagation of rumors.  If you’re interested in pursuing this research question (and have worked with power laws before), please do get in touch. In the meantime, I challenge the authors’ suggestion that a power law distribution necessarily says anything about the quality or reliability of the underlying data. Using the casualty data from SyriaTracker (which is also used by USAID in their official crisis maps), my colleague Dr. Ryan Woodard showed that this dataset does not follow a power law distribution—even thought it is one of the most reliable on Syria.

Moving on to the content analysis of the Mumbai blast tweets:  “The number of URLs and @-mentions in tweets increase during the time of the crisis in com-parison to what researchers have exhibited for normal circumstances.” The table below lists the top 10 URLs shared on Twitter. Inter-estingly, the link to a Google Spreadsheet was amongst the most shared resource. Created by Twitter user Nitin Sagar, the spreadsheet was used to “coordinate relief operation among people. Within hours hundreds of people registered on the sheet via Twitter. People asked for or offered help on that spreadsheet for many hours.”

Rumors related to the blasts also spread through Twitter. For example, rumors began to circulate about a fourth bomb going off. “Some tweets even specified locations of 4th blast as Lemington street, Colaba and Charni. Around 500+ tweets and retweets were posted about this.” False rumors about hospital blood banks needing donations were also propagated via Twitter. “They were initiated by a user, @KapoorChetan and around 2,000 tweets and retweets were made regarding this by Twitter users.” The authors of the study believe that such false rumors and can be prevented if credible sources like the mainstream media companies and the government post updates on social media more frequently.

I did a bit of research on this and found that NDTV did use their twitter feed (which has over half-a-million followers) to counter these rumors. For example, “RT @ndtv: Mumbai police: Don’t believe rumours of more bombs. False rumours being spread deliberately.” Journalist Sonal Kalra also acted to counter rumors: “RT @sonalkalra: BBMs about bombs found in Delhi are FALSE. Pls pls don’t spread rumours. #mumbaiblasts.”

In conclusion, the study considers the “privacy threats during the Twitter activity after the blasts. People openly tweeted their phone numbers on social media websites like Twitter, since at such moment of crisis people wished to reach out to help others. But, long after the crisis was over, such posts still remained publicly available on the Internet.” In addition, “people also openly posted their blood group, home address, etc. on Twitter to offer help to victims of the blasts.” The Ushahidi Map also includes personal information. These data privacy and security issues continue to pose major challenges vis-a-vis the use of social media for crisis response.

Those who are still skeptical about the value of Twitter for real-time situational awareness during a crisis ought to ask why terrorists likely think otherwise. In 2008, terrorists carried out multiple attacks on Mumbai in what many refer to as the worst terrorist incident in Indian history. This study, summarized below, explains how the terrorists in question could have used social media for coor-dination and decision-making purposes.

The study argues that “the situational information which was broadcast through live media and Twitter contributed to the terrorists’ decision making process and, as a result, it enhanced the effectiveness of hand-held weapons to accomplish their terrorist goal.” To be sure, the “sharing of real time situational information on the move can enable the ‘sophisticated usage of the most primitive weapons.'” In sum, “unregulated real time Twitter postings can contribute to increase the level of situation awareness for terrorist groups to make their attack decision.”

According to the study, “an analysis of satellite phone conversations between terrorist commandos in Mumbai and remote handlers in Pakistan shows that the remote handlers in Pakistan were monitoring the situation in Mumbai through live media, and delivered specific and situational attack commands through satellite phones to field terrorists in Mumbai.” These conversations provide “evidence that the Mumbai terrorist groups understood the value of up-to-date situation information during the terrorist operation. […] They under-stood that the loss of information superiority can compromise their operational goal.”

Handler: See, the media is saying that you guys are now in room no. 360 or 361. How did they come to know the room you guys are in?…Is there a camera installed there? Switch off all the lights…If you spot a camera, fire on it…see, they should not know at any cost how many of you are in the hotel, what condition you are in, where you are, things like that… these will compromise your security and also our operation […]

Terrorist: I don’t know how it happened…I can’t see a camera anywhere.

A subsequent phone conversation reveals that “the terrorists group used the web search engine to increase their decision making quality by employing the search engine as a complement to live TV which does not provide detailed information of specific hostages. For instance, to make a decision if they need to kill a hostage who was residing in the Taj hotel, a field attacker reported the identity of a hostage to the remote controller, and a remote controller used a search engine to obtain the detailed information about him.”

Terrorist: He is saying his full name is K.R.Ramamoorthy.

Handler: K.R. Ramamoorthy. Who is he? … A designer … A professor … Yes, yes, I got it …[The caller was doing an internet search on the name, and a results showed up a picture of Ramamoorthy] … Okay, is he wearing glasses? [The caller wanted to match the image on his computer with the man before the terrorists.]

Terrorist: He is not wearing glasses. Hey, … where are your glasses?

Handler: … Is he bald from the front?

Terrorist: Yes, he is bald from the front …

In addition, the content analysis found that “Twitter site played a significant role in relaying situational information to the mainstream media, which was monitored by Mumbai terrorists. Therefore, we conclude that the Mumbai Twitter page in-directly contributed to enhancing the situational awareness level of Mumbai terrorists, although we cannot exclude the possibility of its direct contribution as well.”

In conclusion, the study stresses the importance analyzing a terrorist group’s political goals in order to develop an appropriate information control strategy. “Because terrorists’ political goals function as interpretative filters to process situational information, understanding of adversaries’ political goals may reduce costs for security operation teams to monitor and decide which tweets need to be controlled.”

My interest in Virtual Worlds was recently sparked by Caja Thimm’s fascinating research on Second Life (SL) and Larry Pixa’s intriguing work on simulation platforms for disaster training. I was therefore eager to read David Wyld’s new report on “Government in 3D” which explains the in’s and out’s of virtual worlds.

What follows is a series of short excerpts that I found particularly interesting. These range from terrorism and money laundering to game-wide epidemics and the role of the media in virtual worlds.

The Past and Future of Virtual Worlds

Intelligence and Terrorism in Virtual Worlds

Training and Simulations in Virtual Worlds

Finance and Economy in Virtual Worlds

Media and Film in Virtual Worlds

Twitter, Flickr, Wikipedia, YouTube – a few of the Web 2.0 & mobile applications tracking the Mumbai attacks in quasi real time along with the aftermath. Twitter was apparently faster than CNN in reporting the initial events, according to TechCrunch:

From TechMacro: “the local authority advised TV channels to stop broadcasting sensitive information which may help terrorists tracking army’s movements. It is much less likely that the terrorists are now using Twitter to find way to escape.”

For live, crowdsourcing updates, see the following links on Twitter, Flickr, Wikipedia. The Wikipedia entry already includes a picture (probably taken with mobile phone) of one of the terrorists.

Wired also writes that “local bloggers at Metblogs Mumbai have new updates every couple of minutes. So do the folks at GroundReport. Dozens of videos have been uploaded to YouTube. But the most remarkable citizen journalism may be coming from “Vinu,” who is posting a stream of harrowing post-attack pictures to Flickr.”

Here are initial crisis maps of Mumbai, please let me know if you know of others.